Everyone Is Gay: On the Road!
Book Campaign
Deadline: December 13
Indiegogo
Dannielle and Kristin from everyoneisgay.com recently released their first book, This is a Book for Parents of Gay Kids, and are taking to the road to share it with communities across the United States. This fall, they are doing more than just a book tour; they are engaging with families, dialoguing with communities, and bringing much-needed resources to 21 cities in the US & Canada—including Minneapolis! So, instead of a campaign where they create a new project and you get perks based on that project, Dannielle and Kristin are just asking for help. They need to gas up the car & keep it maintained, put a roof over their heads, get food in their stomachs, and acquire coffee for their brains (or wherever coffee goes).

Anyone who contributes will get exclusive access to the tour, streaming from live events, Google hangouts from the road, and they’ll also be tweeting & instagramming at you in real time when they fill up the gas tank or arrive at a hotel! PLUS everyone who donates $10 or more will get a personal postcard. The entire tour will exist because of you, and you can watch it happen.

The duo has already let every PFLAG chapter know they are coming, and they’re bringing resources provided by The Trevor Project. ALong the way, they plan to speak with over 5,000 people. What’s more, many of those in-person conversations will be recorded and made available to hundreds of thousands of people across the world via the power of the internet. Yes, they will be reading from their book and signing copies. However, this tour is about meeting families who need help. They want to do more than just hand over a copy of the book; they want to get out there and answer questions, and make those answers available to as many people as possible. 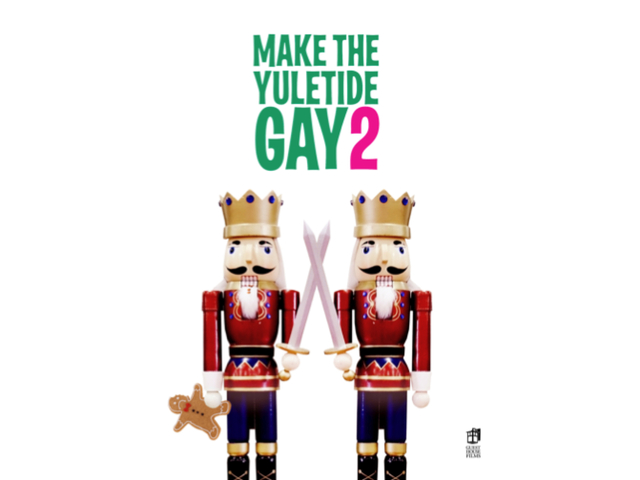 Make the Yuletide Gay 2
Feature Film
Deadline: December 31
Kickstarter
Guest House Films, a leading producer and distributor of gay-themed films, has launched a new campaign to help bring to life the much-anticipated sequel to the company’s 2009 smash hit gay Christmas comedy, Make the Yuletide Gay, in response to growing fan requests. Make The Yuletide Gay 2 will go into production in 2015, contingent upon the campaign reaching its goal.

Make the Yuletide Gay 2 centers around the Christmas-time wedding of Olaf “Gunn” Gunnunderson and Nathan Stanford, bringing together both of their families, along with some unexpected guests. Guest House Films is confident that most or all of the original cast from the first film would return for the filming of the sequel, and the team is looking forward to finally getting Make The Yuletide Gay 2 into production.

“We want to do right by our fans, and that means raising enough money to make a sequel that lives up to the magic created in the original film,” said Rodney Johnson, co-founder of Guest House Films and producer of Make The Yuletide Gay. “We have set an ambitious goal for ourselves, but after years of listening to our fans offering up their support for a sequel, we are determined to make it happen.”