Land of 10,000 Stories: An Interview with Stewart Van Cleve 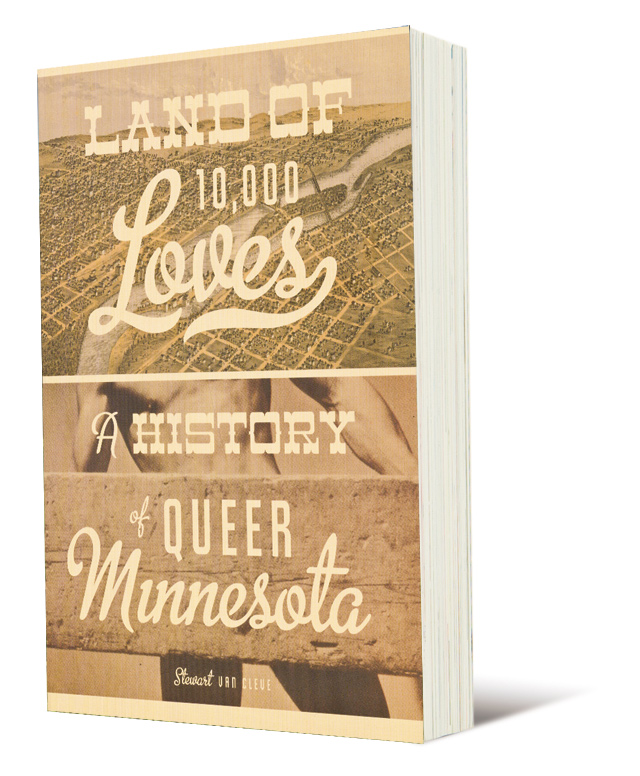 Stewart Van Cleve’s Land of 10,000 Loves: A History of Queer Minnesota offers a distillation of over 100 years of material on the state’s gay background. Van Cleve, former assistant curator of the Jean-Nikolaus Tretter Collection in Gay, Lesbian, Bisexual, and Transgender Studies at the University of Minnesota, recently discussed his herculean task with Lavender.

Thanks in great part to Jean-Nickolaus Tretter’s efforts, there is an enormous amount of preserved material concerning Minnesota’s gay history. Would you talk a bit about the collection and how you how you tackled it?

The Tretter Collection is one of the world’s largest GLBT repositories; it was profoundly intimidating. It was also an absolute mess. Tretter would be the first to tell you that he is a collector first, a linguist second, and an organizer somewhere after that. In fact, when I first started working there, entire segments of the archive were blocked off by boxes stacked up to my waist.

I am a tremendous fan of simplicity, process, and order. I set to cleaning up the archive and putting everything in a rightful place. As I broke the work up into manageable pieces, I continually encountered names, places, and events that were unfamiliar: “Ashley Rukes,” “Gay House,” “Foxy’s,” etc. I saw an incredibly vast [amount] of historic information that was at risk of being forgotten.

10,000 Loves is amazingly accessible. How did you set things out so that the book might be, in part, a springboard for future works?

I loved reading all of Minnesota’s old GLBT newspapers–Equal Time, the GLC Voice, Focus Point, and others–and I became enraptured with the journalistic style. At its best, the style is fair, balanced, and to the point. So the book is an assemblage of short articles about people, places, or events from the past that individually read like newspaper articles, but can collectively serve as a serious contribution to American history. It can be read from cover-to-cover, or without any direction at all.

So the book can be read several ways. It can be read as entertainment—a collection of amazing stories that all happen to be true. It can also be read as an illustrated guide to the Tretter Collection’s holdings. For scholars, it can be read as a compendium of information that leads to many new questions that have yet to be answered.

What percentage of the material is still to be tapped?

If you sat down and started to consume all of the Tretter Collection’s holdings—every newspaper, every photograph, every book—you would be very old before you finished. This is because the archive continues to collect material. I stopped working there a few years ago, and it is already full of material I don’t recognize. This doesn’t even take other historical resources—such as Quatrefoil Library—into account!

What most would you most like Lavender readers to draw from 10,000 Loves?

I would like my readers to find their own lives and memories reflected in this book. Sometimes we convince ourselves that we are destined for the wayside of history. We think that only “important” people are part of history, or that someone else is destined to preserve it. But everyone’s memories are important, and everyone has the capacity to save the past from disappearing. In fact, sometimes the most mundane experiences become the most riveting histories.

Take, for example, the old Gateway District. By the 1940s, it was a riverfront slum that spread from the Hennepin Avenue Bridge and the Third Avenue Bridge to the Courthouse and the Gay 90s. For decades, the Gateway was where the city’s first gay bars operated, until the entire area was obliterated during an urban renewal project. As a result of the destruction, most of the Gateway’s queer history has been forgotten. I hope that my readers see value in the memories that survived the Gateway’s destruction, and draw a connection to the value and the fragility of their own memories.

What would you say to young readers who might say, “That’s old stuff–why should I care about that?”

Well, I’m twenty-four, so I’m not sure if I have enough distance from youth to have a perspective on it! But I have certainly encountered dismissive sentiments about our local past. We should care about our history because it adds such a great deal of meaning to what we experience in the present. One of the most comforting statements in the English language is one that has particular resonance with our community: “You are not alone.” In the present, it means that there are other people, all over the world, who are like us. It makes us feel less strange, less different, and connected to something that is broader and greater than ourselves.

Knowledge of a documented history adds further depth to our lives. Not only are we not alone today, but we are not alone in the broader context of time. Too often, our community is cast as superficial, meaningless, and transient. The anti-gay movement is particularly keen on presenting an interpretation of “tradition” that excludes our lives and our loves. This book proves that we are inextricably tied into the history of our region. We are part of the tradition, not an aberration from it.