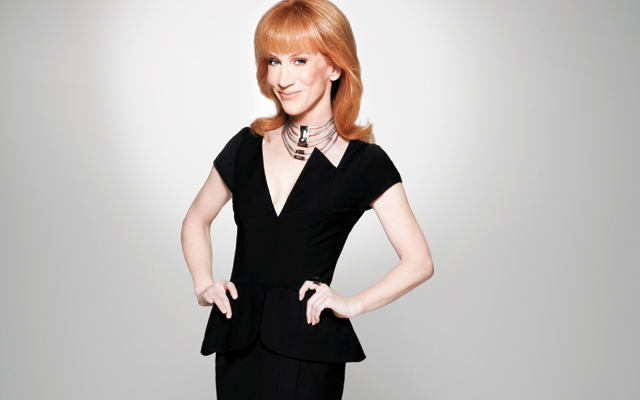 As a GLBT-identified journalist, whenever any interview begins with “Congratulations on the marriage equality there in Minnesota!” you know it’s going to be great. This is precisely how Kathy Griffin greeted me as we began our conversation ripe with laughter.

Griffin, who has long been involved in GLBT causes by attending rallies, speaking at Capitol Hill, and the like, has followed the struggle to gain marriage equality nationally. With nothing but kind words to say about Senator Al Franken and other parties who helped pass the legislation here in Minnesota, she says, “It’s so important for voters, especially the GLBT community, to know who is in their corner and who isn’t and why.”

It could be wise to listen to her advice, as Griffin is the one who is quick to hold politicians accountable for their voting records—most notably, making it a point in the past to call out Michele Bachmann on her anti-gay stances.

The two-time Emmy winner and recent Grammy winner (finally, after being nominated in the Best Comedy Album category six times over the years), is quick to threaten a phone call to Cher or Bette Midler in order to tattle on you if you don’t follow your local politics. The same threat was voiced against me when I was hesitant to answer when Minnesota is holding its primary elections. “Primaries are so important,” Griffin says. “Everyone thinks voting for President is the big one, but the primaries are the game changers.”

As is typical of the name-dropping comedienne, it wasn’t long before Griffin seriously (yet coupled with a joke forcing me to promise not to judge her) voiced her support for Clay Aiken in his candidacy for a House seat in North Carolina’s second district. “I know I’ve given him s*** in my act in the past, but I absolutely support him,” she says.

Her act, which is coming to Minnesota June 13, is breaking records. The iconic stand-up star has received a Guinness World Records certificate for hosting the most televised stand-up specials of any comedian, male or female. Her record-breaking special, aptly titled Record Breaker was the twentieth of her career, and Griffin shows no signs of stopping. Her first stand-up special, HBO Comedy Half Hour aired on Oct. 18, 1996. Since then, she’s gone on to perform shows like Balls of Steel, 50 and Not Pregnant, and Calm Down Gurrl.

With twenty television specials below her belt, Griffin has told her fair share of stories. Luckily for audiences, celebrities are constantly getting into new antics, which translates into new material for Griffin, most of which never makes it into her taped specials. “The stuff you’re going to hear live is the stuff I can’t say anywhere on television,” she says. “You have to come see me live.”

The stuff in question comes in many shapes and sizes. From performing on gay cruises (just ask her to share her knowledge about the “sex schedules” she finds on cabin doors) to her trademark celebrity-skewering, Griffin tells it like it is. Following some banter about the types of things which work themselves into her live show, Griffin questions, “Do you think Mystic Lake [Casino Hotel] can handle me? Can Mystic Lake handle what I’m bringing to Minnesota?” After joking she might blow the roof off the Land of 10,000 Lakes, she adds, “Am I going to have to bring a canoe to paddle away from the ruined building?”

Between fits of giggles, the self-proclaimed “D-lister” remarked on the camaraderie she feels with other female comedians, joking it is the “catty gay men” who like to pit women against one another. “We are in this together; I don’t feel competitive with my female contemporaries,” she says. “One thing I know about the LGBTQIA2—yes, I know all of the letters and numbers—I think one thing that women need to learn from the gay community is women need to do a better job sticking together.”

Pausing to mention that she believes her audience in Minnesota won’t be primarily gay men, she makes a promise to hilariously educate the audience on all of the letters (and number!) in LGBTQIA2. Having been involved with the community for decades, Griffin adds “One thing I admire is the ability to stick together and actually accomplish things. Obviously there is fighting within the community (as in any community) but when it comes down to it the LGBT community does a great job of sticking together and I don’t think women are quite there yet. I’m going to criticize hetero women for one second and say that sometimes hetero women get bogged down in competing, not having each other’s back, and not getting along when the chips are down.”

As a woman who identifies as a feminist, Griffin says hearing people proclaim that sexism in the comedy industry doesn’t exist makes her sick. Listing that almost all of the promoters, tour managers, and comedians are men, she says, “There is still a huge amount of sexism in stand-up comedy. If I’m doing morning radio, for example, they’ll go ‘You’re kind of funny for a chick. Normally I don’t think chicks are funny, but you’re kind of funny.’ To which I respond—which is always a conversation ender— I always say ‘Really? Would you say to an African American person ‘Normally I think you’re lazy and shiftless, but you seem to work hard?’ And the conversation usually ends, but I’ve made my point.”

Griffin, who advocates for feeling comfortable in whatever skin you’re in, has been vocal about being pressured into a nose job at age 26 and her liposuction gone wrong just a few years ago. Joking that she would show the picture slides in her act “to the horror of the audience,” Griffin adds, “But I came up with a more radical solution. It’s called eating well and working out.”

With a five-mile walk every day, Griffin was able to find her bliss. “We all feel the pressure to do these intense workouts and get a personal trainer, and yet I have found after every diet pill and work out plan on the planet, the consistency of just a five mile walk every day has been the greatest thing,” she says, sharing her body-positive philosophy. “Anybody can do it. Do something that’s consistent and fun and don’t pressure yourself to be perfect or stick to a plan that no one could possibly stick to.”

It’s this form of acceptance and support (and her great wit certainly helps) which has garnered Griffin her enormous GLBT fan base. She’s famously said, “They love me because I’m outrageous, and I love them as an audience because they’re the unshockable gays, which is what comedy should be about.” According to Griffin, she was the one in high school who went to prom with the gay friend (who is now a choreographer at Disney world) and has always been surrounded by “the gays.”

“We found each other organically,” she says, referring to it as a case of the chicken and the egg, not sure if she attracted gay men or they attracted her. Either way, she enjoys performing for GLBT audiences, calling them her favorite. “I started doing the gay clubs and getting a better response [to my act]. So, more gay friends followed. I find that gay audiences are more raucous, somewhat political, and knowledgable. But I won’t discriminate. I’ll still welcome the eleven or twelve straight guys who were dragged there by their girlfriends.”

And we love her in return for her comedy, her activism, and her support. “I don’t know that I feel a responsibility for the community,” she says. “I just want to do whatever I can and I honestly feel a true sense of community.”

Kathy Griffin will be appearing at Mystic Lake Casino Hotel June 13 at 8:00 PM. For tickets, head to www.mysticlake.com.