Jim Obergefell: The Man Behind the Court Case 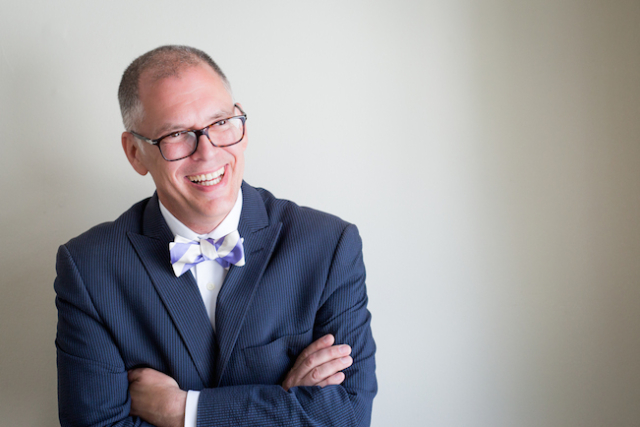 Many people know the name Jim Obergefell thanks to a little thing known as Obergefell v. Hodges, but few people know the man behind the court case. Minnesota will get the chance to hear from Obergefell himself when he takes the stage at the Human Rights Campaign’s Twin Cities Gala on September 12.

Obergefell’s appearance is not only timely due to the June ruling by the Supreme Court, but his journey also fits remarkably well with this year’s theme: “Stronger Together – Moving Equality Forward.” The theme reflects how communities need to join together to take on the many challenges that remain in securing true equality for all GLBT people.

In the spirit of the theme, Obergefell’s case has affected the marriage laws under which about 200 million Americans live, but the reason he initially sued his home state of Ohio was very personal: to make state bureaucracy recognize him as the widower of his late partner of 21 years, John Arthur.

They were legally married in Maryland just a few months before John died in 2013 — but in 2004, Ohio voters had amended their state constitution to prohibit gay marriage from being “valid in or recognized by” the Buckeye State. The journey came full circle when the Supreme Court issued its opinion on June 26 of this year.

The potential monetary benefits for Obergefell of winning his lawsuit are small: He says Ohio’s recognition of his marriage would bring with it $255 in Social Security benefits, and potentially a small disability benefit when he retires.

“That was never our driving reason for doing this,” he said, explaining that “it was all about our dignity and the respect we expect from the state we call home.”

The battle lasted almost two years, which is relatively short for a case that reached the Supreme Court. “It was certainly tiring at times,” Obergefell says, “but I always concentrated on the fact that I was doing this for the right reasons: to keep my commitments to my husband and to fight for what’s right.”

Obergefell relied on his family and friends to keep him grounded, and he says he was fortunate enough to make many new friends along the way. “The other plaintiffs and I became like family, and they were a constant source of support and encouragement,” he says. “Fighting for my husband and our marriage also helped my grieving process, and I know I’m in a healthier place today than I would be if I hadn’t had this experience.”

In a battle when many other people would have given up, Obergefell (and the plaintiffs for the three other cases that were consolidated into Obergefell’s) kept fighting. Simply put, Obergefell says it’s because there was no other option for him. “I promised my husband to love, honor, and protect him, and continuing to fight for our marriage was the only path I could possibly take,” he says. “The fact that John had died didn’t change my need to live up to my promises to him. The incredibly positive response I experienced across the country also reinforced that I was doing the right thing.”

Facing the Supreme Court had to be a nerve-wracking experience, especially when similar cases were previously dismissed without a ruling. But Obergefell remained confident that the ruling would go in favor of marriage equality.

“When Federal Judge Timothy Black issued the first ruling on our case — in our favor — I became even more confident,” he says. “Although the Sixth District Court of Appeals ruled against us and the other plaintiffs, the silver lining was that it set up the likelihood of the Supreme Court accepting an appeal. By that time, the Supreme Court seemed to have indicated its intent by not issuing stays or accepting appeals on other appeals court decisions granting marriage equality. I never assumed we would win, however; I hoped so, and the indications were positive, but I knew that no decision is guaranteed.”

As it turned out, the Supreme Court did, in fact, side with Obergefell and the other plaintiffs, granting marriage equality throughout the States. For Obergefell, the emotions of the journey resulted in tears beginning only a few sentences into Justice Kennedy’s summary of the decision when it became clear that they were ruling in his favor.

“That day is very much a blur, but I remember feeling — for the first time — more like an equal American,” he says. “Walking through the crowd on the courthouse plaza was an overwhelmingly emotional experience, hearing the cheers, seeing the tears, and feeling the outpouring of love and support. President Obama thanking me for making the country a better place is also a highlight of the day.”

It’s safe to say that most Americans never even think of having their names appear in history books, but for Obergefell, his name will forever be tied to a landmark Supreme Court case right along the likes of Plessy v. Ferguson and Brown v. Board of Education.

“It is surreal to think about my name being in history books and being taught in classrooms,” Obergefell says. “I’ve never wanted to be someone people recognized or whose name was well-known, but I’m OK with it because it’s for all the right reasons. Every time someone stops me to thank me or tell me a story about why our fight matters to them or someone they love, I’m humbled and reminded again that I did the right thing. I consider myself very lucky to be in this position simply because I loved John and wanted to fight for him.”

Up until the decision was announced, polls of the American public showed that a majority of country was ready for marriage equality and, in general, the post-decision reaction has shown exactly that. Although some people continue to fight against the equality promised by the Constitution and upheld by the court, Obergefell is pleased by the reaction of the American people. But that doesn’t mean the fight is over. Although the United States now has marriage equality from coast to coast, the sad fact is that the GLBT community is still not completely equal — something that Obergefell will continue to fight for.

“In too many places across the country, we can lose our jobs, be evicted from our homes, and more, simply because of the way we were born and the person we love,” he says. “That has to change, and we can’t be complacent now that we can marry. Our transgender brothers and sisters lack basic protections in much of the country, and we must change that as well as address the hatred and violence directed toward them. For me, personally, I’m still figuring out what that will look like.”

While he continues fighting for equality, he also continues to spread the message and lessons learned from his Supreme Court journey. With a book and a movie in the works, Obergefell is hard at work spreading his message of love and hope.

“It was clear from the start of our fight that our story resonated with people. Everyone loses someone they love, and people could relate to that pain as well as the hurt of being treated with such indignity,” he shares. “I never thought of myself as someone with a story worth sharing, but I learned that people everywhere felt a connection to us and our fight. When people say, ‘You’re writing a book, right?’ over and over, it finally sinks in!”

Obergefell has also signed with APA Speakers, a Los Angeles talent agency that represents many celebrity speakers and lecturers, such as Arnold Schwarzenegger, Jane Fonda, Jesse Tyler Ferguson, and more. This comes as a surprising life change for Obergefell.

“I certainly never expected public speaking to become part of my life,” he says. “I’ve sung and performed on stage, and my professional career as a high school teacher and then corporate trainer certainly makes me comfortable in front of others. I don’t think I’d be doing this if I hadn’t had those experiences or developed those skills in other aspects of my life.”