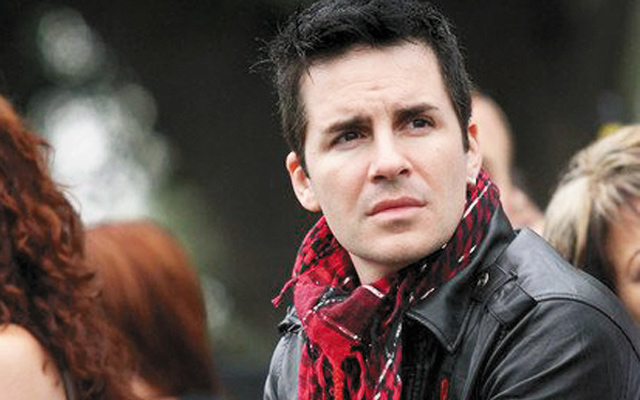 Hal Sparks is beloved by GLBT audiences for his time on Queer As Folk. He also enjoys an illustrious career as one of the most intelligent and attractive comedians around. Every Wednesday morning he can be heard on am950 as Stephanie Miller’s cohost on her extravagantly comic national morning show. It’s called Hump Days With Hal. I recently spoke with 42-year old Sparks about his insights as a straight ally to the GLBTcommunity.

JT: Thre are very few other straight men, other than perhaps your Stephanie Miller show cohort, John Fugelsang, who express pro gay views as frequently as you on a national platform. You remind me of a protective dad or big brother. How did that get shaped in your character?

HS: A couple of things: when I was growing up in Kentucky there were four kids I used to hang out with all the time – like four running buddies, four other boys. Later in my life I would find out the two of them were gay. And I would find out later what they went through. One of them, the family still doesn’t know.

Several times over the course of my life I found out that some people I respect and love dearly finally found the strength to come out of the closet to me. It didn’t change my feelings for them at all. And I started to really feel the fact that they’re in this emotional straitjacket, whenever they just want to live their life in a normal way. And why do I care about this? My response is how can you not? It’s more of an alien thought to me that people wouldn’t want gay people to have equal rights and that’s why I’m comfortable with it. It’s maddening to me that the alternative exists – like we’re in some bizarre-o world where you literally have Freedom Works running the Tea Party about individual liberty and small government. These folks are trying to institute the most Draconian antigay laws and keep the ones that still are on the books. It’s up and down, black and white.

JT: I’m a decade older than you and when I was growing up if your were a straight man who didn’t have any problem with gays you still kept silent about gay rights. In many cases, it could actually stigmatize you, just being a vocal ally. But for your generation, by and large, it’s just not much of an issue. In fact, what’s throwing off a lot of people, middle-aged and beyond, is that there are so many straight white men, unmistakably masculine, like yourself, who don’t have an issue with it and will say so.

HS: We went through a gender comfort transition in this country. Call it women’s lib, the feminist movement, Women’s Lib in America in the ‘80s – openness about women’s value in arenas other than childrearing and motherhood. A woman being a woman is okay. A man being a man is okay and anything in between, personality-wise, is therefore, okay and that makes it easier to be who you are.

We became much closer to that level than our older compatriots. I think the fear of the feminine has a lot to do with, specifically, male homosexuality, particularly in the older generation. They have this view that feminine is weak and of gay men as feminine. Even though that’s not the case, that’s the mentality.

So my generation became comfortable with all the elements of female femininity. We weren’t hostile to it; therefore, we didn’t really perceive gay men in that regard and therefore nothing to be feared.

I also think we went through a level of introspection as a generation, where you look inside yourself. You really gave a good look. You didn’t have to be afraid of your inner self and that you were gonna stumble over the fact that you were straight when you thought you were gay or you were gay when you thought you were straight. You paid attention to your own life. Your own internalized being. You could come out and admit it. You could ask those questions of yourself.

Whereas the previous generation was afraid to ask those questions in the first place for fear of the ‘wrong’ answer. What if you did find out you were gay and then all of the sudden you have to answer to that thought form, and now there’s no support for it. So the fear was rooted in the fact that there was no social structure to protect them. And there was a constant judgment that women are somehow weaker and, therefore, anything feminine is weak. Men who are perceived as feminine are weaker than men who are not. Therefore, if you are gay or feminine, you are weak. So being straight is your only point of value as a man

Also, psychologically, acceptance of gay people [marks] the maturing of any society.

JT: Americans may be getting savvier about how sex hysteria is used to undermine candidates. There also seems to be a wider awareness that right-wingers are largely more erotophobic than those to their left. It’s interesting how Republicans will forgive Senator David ‘Diaper Boy’ Vitter and ultimately want Senator Larry Craig and Rep. Mark Foley, two men with a clearly homosexual side, out of the way.

HS: This is very frustrating to the Right Wing. The Left is not run on sexual morals. Where our moralism takes its stands are on issues that matter: war, poverty, things that quite frankly we can do something about. But the war that is waged on a moral front from the right is largely sexual and largely about gender control, meaning that man is the leader of the household. Women have to be subservient. Gay is a choice. Your behavior is their business.

The problem with that is that you are automatically setting yourself up for a level of scrutiny that is inhuman because you don’t allow for reality to set in. And when it does catch up it shows their hypocrisy. They have to hide it. In hiding who you are, it deviates you more from your normal track of action, your normal track of being. That’s why they become crazy to some degree. It’s bound up in who they are.

Hal Sparks
Every Wednesday, 8 to 11 am
The Stephanie Miller Show
KTNF am950 The Voice of Minnesota