In the Shadow of James Buchanan: Becoming a Grown Up…with a Hyphen 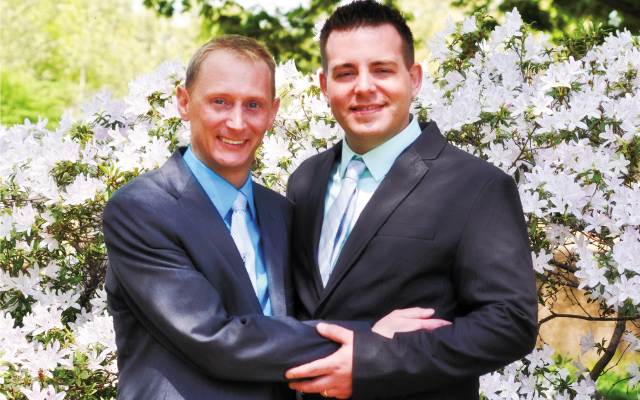 I was 20 years old in 1999 when I stood as the best man at my sister’s wedding.  It only made sense that I play the part; she was marrying one of my best friends and I had introduced them.  I was still in the closet in those days, and as we were packing things up after the ceremony I remember my mom pointing to various items and saying, “Let’s keep that for when Brian grows up and gets married.”  It wasn’t a slight.  She hadn’t meant to imply that I lacked maturity. It’s just something people say: “someday… when you grow up… and get married.”  When you’re young, those two states of being can seem symbiotic because marriage if often perceived as society’s benchmark for the passage into adulthood.

For GLBT folks who came of age in the late ‘90s, getting married wasn’t on the horizon.  That ceremonial springboard into being-a-grown-up wasn’t something we thought about much in those days, when the community was focused on non-discrimination more than full inclusion.

As marriage equality began creeping into the national conversation over the past decade, I supported it but somehow I didn’t see myself on the inside.  The wall between me and “when you grow up and get married” hadn’t come down yet.  Then I met Brian.

From the very beginning it wasn’t like other relationships.  It began unexpectedly and evolved quickly.  A year into dating, the debate about Minnesota’s constitutional amendment flared up, and suddenly it was extra personal not just because I was gay, but because I knew who I wanted to marry.  Sometime during that politically charged summer we decided to get engaged.

From that point on it was real, but it was still the future.  We talked about living arrangements, dates, places, ideas, who to invite, how much to spend.  But there was no immediacy and not much hurry.  After all, we were young(ish) and had a long time to think about it.

Early this spring, the timeline changed a bit when the company I worked for downsized and I was laid off.  For the first time I was thinking about my future in very grown- up terms.  Could I support my family?  Would this impact our wedding plans?  What if we had to move?  I couldn’t have asked for a better partner than Brian.  Not only was he reassuring and comforting, he suggested we start thinking about the wedding sooner rather than later.  So we did. 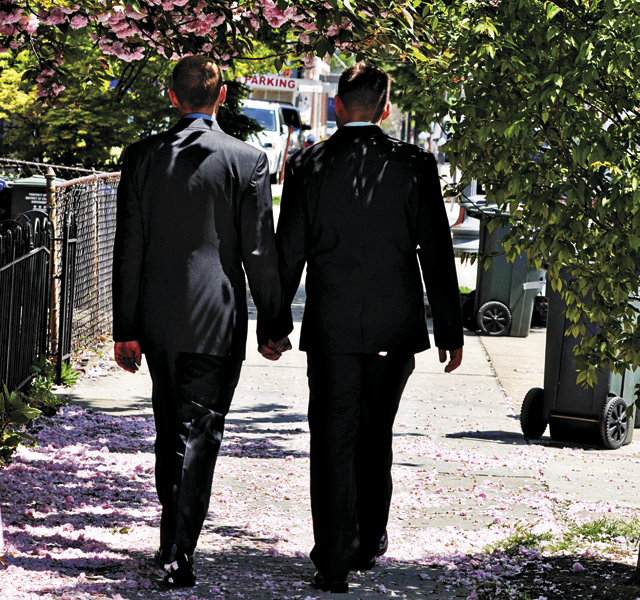 The planning was fast and the event was simple.  We both decided not to let a preconceived understanding of “traditional weddings” impact ours.  Brian wanted something simple, outdoors, maybe near a fountain.  As a history buff, I wanted a location that had historical significance.  We picked Washington DC.  It’s legal there, and since I’m fundamentally opposed to the various states getting to pick and choose on this issue, a federal district seemed like a fun way to make our own statement.  If we’d known Minnesota was so close, we might have waited a few months, but then again maybe we wouldn’t have.

The details all came together pretty seamlessly.  We found a wedding planner to officiate for us and she helped us pick a location.  We wrote our vows on a Sunday morning over coffee/Diet Coke (coffee for me, Diet Coke for Brian), bought our plane tickets, and made a whole trip out of the event.  “We’re getting married on our honeymoon,” we started to joke.

It amounted to about a week in DC, and we did all the standard things that tourists do in the nation’s capital.  We saw all the expected monuments and the Smithsonian.  We trekked through Arlington National Cemetery to visit the grave of Jackie Onassis—something I’ve always wanted to do (…apparently she’s buried next to some president?).   The bus tour of the Pentagon was, uhm, interesting; I recommend it only if you’re into really big parking lots.

We stayed in a variety of places though our favorite was DuPont Circle.  For reasons I don’t yet understand we decided that renting a car would be a good idea.  It wasn’t.  The outlying areas and the beltway weren’t too bad, but driving inside the District is chaotic and left me with a strong desire to go find the person who laid out the streets and explain to him the virtues of a right angle!  You know you’re in trouble when the voice on the GPS says: “Enter roundabout. Then take the. Ninth. Exit.”

Our ceremony was Wednesday, April 24th, midway through the weeklong trip.  We chose Meridian Hill Park in the Columbia Heights neighborhood of DC because it’s outside of the touristy areas.  The park is home to one of the world’s largest water fountains, which we planned to marry in front of.  Sadly, the fountain wasn’t running on our wedding day.  Apparently parks in the District are under Congressional jurisdiction, and funding for upkeep had recently been sequestered.  But it didn’t spoil our day.  Also at Meridian Hill is a shockingly large statue of President James Buchanan, whom most historians believe was gay.  The irony of that fact didn’t go unnoticed as we posed for pictures beneath the towering bronze likeness of our 15th commander-in-chief.

My sister flew out from Boise, Idaho, and a cousin who lives in DC joined us along with her husband.  So our wedding party was only six people (if you include the preacher and us) but it was just what we wanted.  I used a ring that belonged to my great-grandfather, a family heirloom I’ve had for years but never expected to find utility in.  Brian used his dad’s wedding ring.  My sister cried (just like I did at her wedding), and Brian and I both choked up a bit during the vows, which we recited beside the waterless fountain—sequester-be-damned.

Then there was that sentence at the end: “By the authority vested in me by the District of Columbia, I now pronounce you legally married.” And that was it.  The threshold had been crossed.

My parents weren’t able to be there due to my mother’s health, but they called me immediately following the ceremony.  Mom told me how proud she was of me and how happy she was to have a new son-in-law.  We both cried.  I was struck by the notion that no matter how much events or rituals might make you feel like a grown up, there are moments in life when you just need to talk to your mom.

Ever since that day, Brian and I have been joking about how it doesn’t really feel all that different.  He still goes to work every day; I do homework and look for a job; and Sunday morning chats over coffee/Diet Coke continue to feel special.  We still say “I love you” at the end of phone conversations and get excited by random text messages from each other.  But it is different.  It’s in the present now.  Instead of beginning sentences with “Someday, when we get married…” we end them with “…when we buy a bigger house” or “…if we ever have kids.”  When Gov. Dayton signed marriage equality into law three weeks after our wedding, it felt almost like he was doing so exclusively for us.

We discussed at length what to do with our names after the wedding, again trying not to let the rest of the world dictate our decision.  Since we have the same first name, having the same last name felt complicated.  Also, Brian is a junior, named after his father who died when Brian was a baby.  The common name is the only real connection he has to his dad and I couldn’t ask him to give that up.  So we settled on a hyphen for me.  Harper-Tibaldo… I’ve almost gotten used to saying it and when signing my name I still smile involuntarily.  I like the fact that I carry a piece of him with me all the time.

Overall, it was just as memorable as I knew it would be.  I was sad that our parents couldn’t attend, but they’re all hoping to come to our reception if we ever get around to planning one (Note to self: Get on that!).

For the last few weeks we’ve been seeing people we know get engaged (mostly on Facebook).  As our friends start to marry, I’m excited to share advice or words of wisdom and to see how others plan their event, knowing that our wedding was unique, and theirs should be too.  I suppose I do feel older now—more mature, ready for the future, united.  And in more ways that I can explain in print, I’m happier than I ever thought I’d be.

Look Mom… All grown up!