In the Habit: Sisters Giving Back to the Community 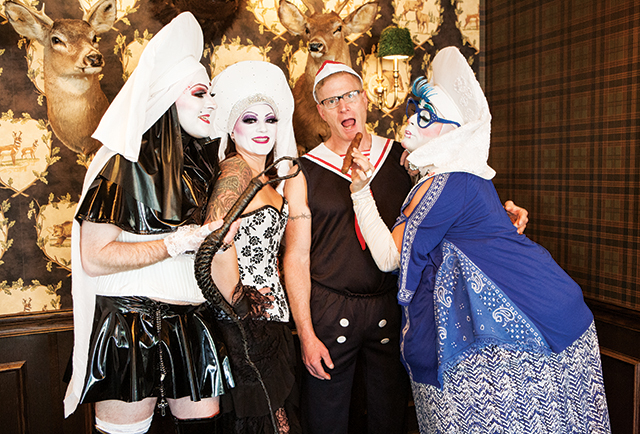 “The first time I went out in public manifested as Girtha Rotunda a young lady came up to me and said, ‘You look marvelous. How long did it take you to get ready?’ Without thinking I blurted out, ‘5 years my dear.'”

That was a number of years ago, and Girtha Rotunda has been making the rounds ever since. Everyone has a different story of how they get involved with The Sisters of Perpetual Indulgence. Rotunda’s involvement with the local Mission House (The Ladies of the Lakes) began a number of years ago when she was still living in Las Vegas.

“One evening after my show I went to a little gay bar not far from my home,” Girtha says. “I was sitting at the bar when all of a sudden, in a cloud of glitter, the doors flew open and in walk three giant acid trip clown nuns. As I recall correctly, my jaw dropped as I uttered ‘What the f*ck?’ They were beautiful, weird, glamorous, creepy and downright fascinating.”

From that moment, Girtha was hooked. She approached them, introduced herself, and left the bar without even finishing her drink. “I went home and promptly Googled The Sisters of Perpetual Indulgence,” she says. “The following weeks before I fell asleep, I would read, watch, and research the deep, rich “Sistory” of the organization dating back to 1979.”

At that time, Girtha was in the middle of opening up a new production show on the strip at Planet Hollywood. Work consumed her life. “Three years later and after eleven-and-a-half years of living in Las Vegas, I decided to move to Minnesota to be closer to my family to be an uncle….or aunt….. pick one,” she says.

At that time, a Minnesota chapter of The Sisters was in the wee beginning stages of being formed. “Yet again, work consumed my life as I was about to depart on a world tour,” Girtha says. “I made time to meet with them and express my interest in joining this growing chapter before I took off. When I returned to Minneapolis the metaphoric phone rang, and I picked up. It was time to answer my calling. Finally, 5 years later from the first time I met The Sisters in Las Vegas to when I made my first manifestation, Girtha was born. It has become a part-time job devouring my free time from my 9-to-5 gig. It’s not for everyone that’s for sure. But I would not have it any other way.” 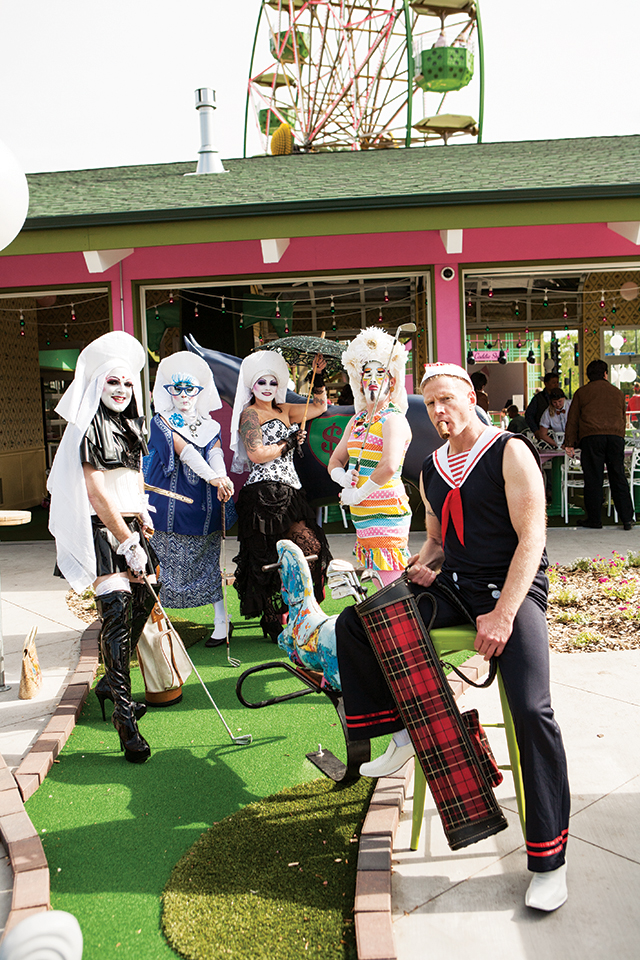 As for her work with the Ladies of the Lakes, Mission House of The Sisters of Perpetual Indulgence, Girtha says she and the other Novice Sisters (including Christmas Morningwood, Jenna l’Talia, Gloria Master-Bates, and Mia DuBois) are real 21st century nuns and take their vows seriously to serve their community as a registered nonprofit organization. The nuns raise cash-money and give it away again to those in need of it. Their mission statement sums it up best: “The Sisters have devoted ourselves to community service, ministry, and outreach to those on the edges. To promoting human rights, respect for diversity, and spiritual enlightenment. We believe all people have a right to express their unique joy and beauty. We use humor and irreverent wit to expose the forces of bigotry, complacency and guilt that chain the human spirit.”

The Sisters are an international organization and everyone is welcome to join: gay, straight, male, female, purple, or polka-dot. Each abbey, convent, or nunnery of The Sisters Of Perpetual Indulgence across the planet has a house name. For example: The Derby City Sisters are from Louisville, Kentucky. The Sin Sity Sisters are from Las Vegas. The Ladies of The Lakes are from the “Land of Ten Thousand Lakes”.

As their mission statement reads, the Ladies of the Lakes use humor as an avenue of progress. According to Girtha, it’s because there is truth in humor. “Who doesn’t like to laugh?!” she says. “Well, my elementary school librarian, Mrs. Savage, never did. But then again, who knows? Perhaps after a few glasses of vino behind the closed doors of the teachers lounge she did. Humor and laughter break down walls and open up avenues for open and honest communication. Laughter brings us closer together. It is a common ground that we all share. Like pooping.”

The Ladies of the Lakes have spent their humor and time volunteering and raising money for organizations such as Avenues for Homeless Youth, Dining Out For Life, Minnesota Aids Project, Out and Sober Minnesota, The Pride Institute, and the St. Paul School District’s Queer Prom to name a few.

The Sisters work with so many different organizations, that Girtha says it would be unfair to choose one over another. “If I had to choose I would have to say the cause or organization nearest and dearest to our heart is the human race,” she says. “Yes, we may not always agree with our neighbor. Yes, everyone has their own unique story. Yes, life is not fair or easy. And yes, socks should never be worn with sandals or a black blouse with a brown skirt. But in the end, at the very end when it is all said and done, we are stuck on this spinning rock together in the middle of the Milky Way. We should and need to take care of one another and treat each other fairly. In some little way our existence as beautiful beings should leave this place slightly better from when we were first introduced to it.” 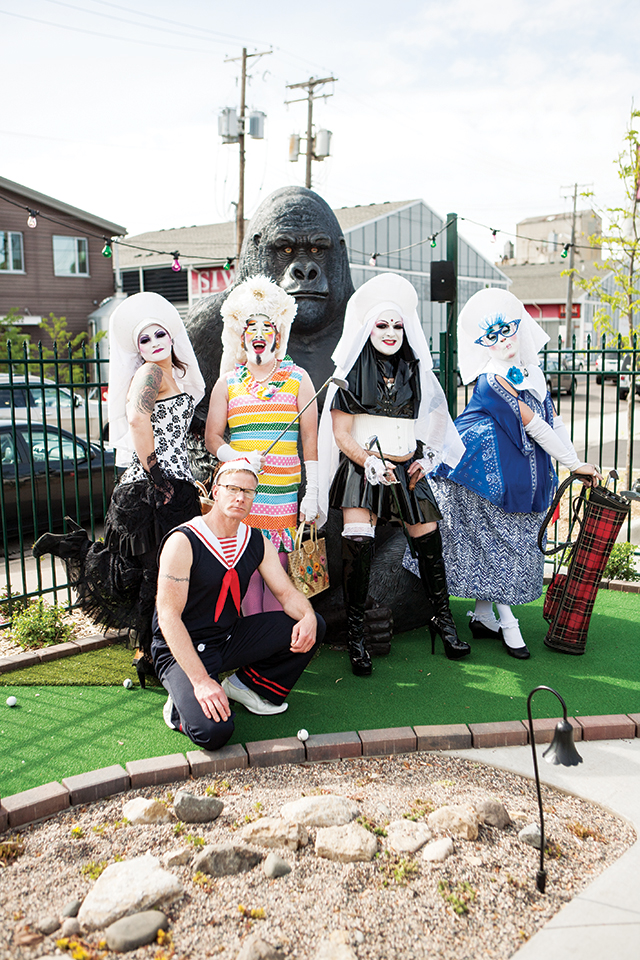 Now, let’s say you are a registered nonprofit organization and you need a few extra hundred bucks for a new photo copier, The Sisters would be more than happy to help you raise that money by holding a bake sale in your honor. Or perhaps you’re having a gala and you need coat check attendants. Have no fear, the nuns are queer.

It all depends. Sometimes Girtha and her fellow nuns (Hilda Clyme, Marcia Dymes, Sheba Grand, Lesba Tyrian, and Boston Joe round out the ranks of The Ladies of the Lakes) go out specifically to raise money for a particular organization. Other times they just go out and have fun for the sake of having fun. And on those nights all the money that gets donated to them goes into a general fund for future projects. If you ever have a few extra coins in your pocket, no matter where you are in the world, when you see a bunch of nuns with white faces and fabulous shoes, go up to them and slip those coins into their purses knowing that your pocket change will go to your queer community and beyond.

The Ladies of the Lakes have participated in the Ashley Rukes GLBT Pride Parade for a couple years now. Aside from gaining exposure for the work that they do, Girtha says it’s simple: “Because every little drag nun dreams of the day when she can…elbow, elbow, wrist, wrist. Clutch the pearls and blow a kiss.”

Just recently, in May, Girtha spoke at RuPaul’s DragCon. (“It was amazeballs! Yes. I said amazeballs. You’re welcome, Perez Hilton. Although, to my knowledge, a lot of them were tucked. Zing!”) Girtha was part of an hour-long round table discussion about her organization, its history, fundraising, and fun-raising. She personally covered the topic of the Holy Fool and Spiritual Clown that has deep roots in Native American spiritual practices and her favorite temple to worship in: the theater.

As for the future of Girtha, The Ladies of the Lakes, and The Sisters of Perpetual Indulgence, well that would be a very long list. For a shorter list, visit them on Facebook (“Ladies of the Lakes“), online at www.TheLadiesOfTheLakes.org or their parent organization at www.TheSisters.org.

For your own adventure at Betty Danger’s Country Club in Minneapolis, start at www.bettydangers.com.