A wave of pink and red equality symbols swept over social networking this week on Facebook and Twitter as the Human Rights Campaign (HRC) gave us a symbol to represent our personal–and collective–quests for the freedom to marry. Facebook saw a surge of users uploading new profile pics which, though not mentioned in the linked article by ABC, coincided with the first day of the Supreme Court hearings regarding same-sex marriage, starting with Prop 8 on Tuesday and moving to DOMA on Wednesday. The HRC handed an amulet of sorts to the community and its supporters, one that had yet to be seen in on this scale in this current campaign toward marriage equality.

This national attention given to the HRC this week provides a perfect segue to give past-due praise to the Twin Cities HRC who received a record number of awards at the annual awards ceremony of the Human Rights Campaign’s 2013 Equality Convention in Washington, DC, early in March. Taking home fourteen awards, the Twin Cities HRC also received top honors of Steering Committee of the Year and Gala Dinner of the Year.

The fourteen awards presented to the Twin Cities:

“We had a very motivated community in Minnesota during 2012,” said Board member Tom Knabel. “That, combined with the incredible dedication and hard-work of our local HRC volunteers led us to break local records in political organizing, fundraising and our Gala Dinner event.” 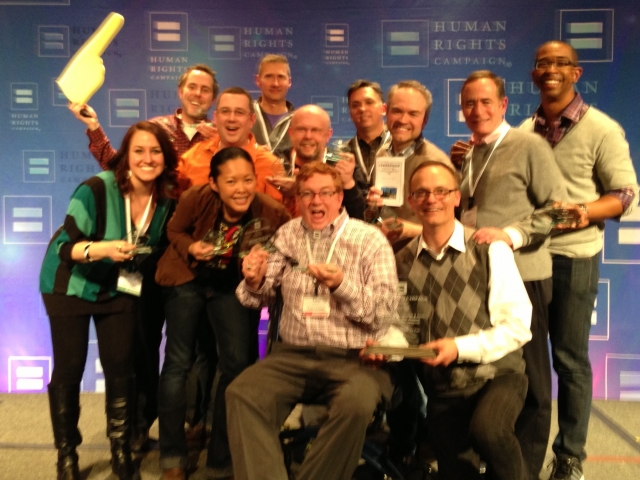 According to Corey Smith and Arouna Phommasouvanh, co-chairs of the 2012 Twin Cities HRC Gala Dinner, our community and allies stepped up. The event was sold-out with 1,100 attendees, set a record for corporate partnerships, and raised more than $100,000 for Minnesotans United to help fund last year’s “Vote No” campaign.  By election day, HRC’s total contribution to the Minnesota effort had topped $1 million.

It takes a groundswell of support to do what Minnesota did when we rejected the marriage amendment in 2012, and the Twin Cities HRC has provided a great number of talented people who inspire others to strongly speak up and out for this community, whether it be at a fundraising gala or an afternoon of bowling for equality. The Twin Cities is fortunate to have these talented and professional volunteers with their eyes on Minnesota, the United States, and global human rights.

For more information about the Twin Cities HRC or if you would like to join, volunteer, or donate toward its efforts regarding the freedom to marry as well as legislation such as the Employment Non-Discrimination Act (ENDA), the Student Non-Discrimination Act (SNDA), the Safe Schools Improvement Act (SSIA), and the Uniting American Families Act (UAFA), visit the website at www.hrc.org/steering-committees/twin-cities.

Watch the HRC’s video of an historical year, making the way for much more progress to come: