How Change Happens with OutFront Minnesota 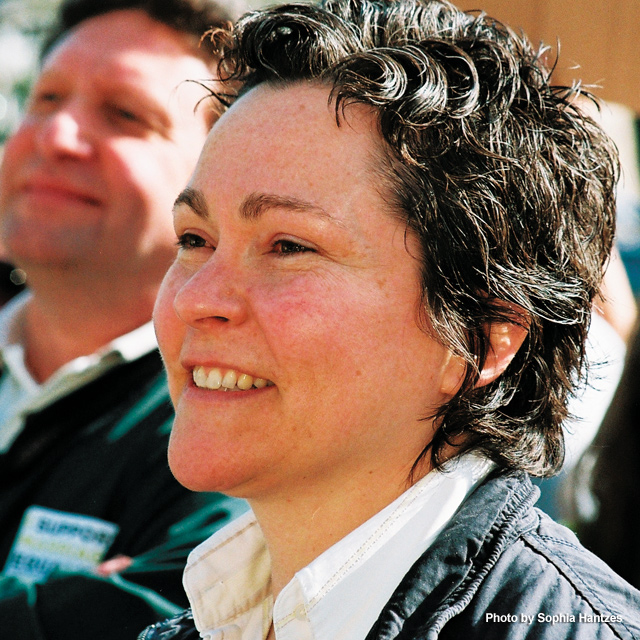 The second-floor office in the Sabathani Community Center in Minneapolis is an unassuming space for such a bustling organization as OutFront Minnesota. In its 26th year of existence, the mission of OutFront is to move Minnesota toward the elimination of homophobia and transphobia and toward full equality for gay, lesbian, bisexual, and transgender people. Most recently, OutFront has been at the fore with Minnesotans United for All Families and Project 515 as part of a triumvirate of sorts, working to defeat the marriage amendment last fall and then lobbying for marriage equality these past months. It is with gratitude and curiosity that I went to OutFront to talk to Executive Director Monica Meyer about the victory and the future of OutFront and the LGBT community in Minnesota.

As explained by Meyer:

It’s about how change happens. We envision that Minnesota is a better place when Minnesotans understand LGBT issues. They understand LGBT issues, they’re not afraid of LGBT people, they’re working on perhaps any stigma that they have about what they perceive LGBT people to be like, and that they’re working on societal homophobia and transphobia that might be there–that’s the Minnesota that we want to live in, right? We want a Minnesota where a majority of Minnesotans are thinking, “You know, I know somebody who is LGBT and I don’t see any reason why they can’t have the same freedoms I have.” They know how to face any discrimination or adversity and they do it because they think it’s a good way to be. So, OutFront exists for that purpose. We don’t have one policy that we work on. We don’t have one issue that we can say, “Well cool, when we have that we can close our doors.”

So, we know that we can’t close our doors yet. We know that because there are still hate crimes out there, that we get bias incidence reports across the state, we still know that there’s discrimination in employment, that–despite having laws–it’s still difficult for LGBT people to be active participants in society. We can tell stories about kids being bullied in school because of their perceived sexual orientation or their gender identities. So, we know we’ve got work to do. For us, we know that OutFront will never be big enough to be in every single community and have staff there to say, “Stop that.” And we believe that society will be a better place if there are more people who are actively working on LGBT equality. They’re active. They’re vocal. At OutFront, we know we need to support those people and we need to connect them so they’re not the lone unicorns out there. We need to network these champions of equality.

What was awesome about the amendment was that people stepped up. It was such a prevalent story in the campaign when people would say, “I never thought I was political, but this issue means a lot to me, it means a lot to our state, and we need to defeat that amendment.” It lit a fire across our state. For OutFront, we were investing in building a lasting infrastructure of leaders across our state. That’s what we really wanted.

When we knew that the constitutional amendment was on the ballot, that was the piece that OutFront was instantly interested in: we cared about feet on the ground. We wanted a campaign that would be transformative for our state, and it was. It was the only reason why were were able to pass marriage; we were able to go back out across the state and say, “We defeated the amendment and now we’re going to finish the deal.” And people did. Volunteer leaders were back to phone banking and saying, “I didn’t think we’d have to phone bank again, but let’s do it.”

And now we have to go back across the state and tell them what’s next. People are engaged because they want to do good work and they like the community that is built around it, so we want to keep that community stocked up, full of leaders.

One thing we know is that we need to be building support in the districts around marriage, so that we make sure that we get the people who voted for marriage reelected. We know that it’s early to start on reelections, but we also know from the amendment campaign that we had the luxury of having 18 months to work on defeating the amendment and that was great because we truly are building this infrastructure. We’re deliberate. We have the time and space and can raise the funds to do it. Across the state, we’ll be working to protect those legislators; not just talking about the legislators, but how we can make this state be the Minnesota we want it to be.

We’re really proud of Minnesota. We’re really proud of advocates for LGBT equality. People stepped up and gave their all. They gave their time, their money, and their blood, sweat, and tears to defeat the amendment and pass marriage. And, we know there’s a lot of interest in staying engaged and connected, so that’s what we’re going to do. We know that one of the main issues will be Safe Schools and we’ll doing some support of these legislators who voted for marriage. Then, we’ll be talking to communities within communities about what’s important and making sure that we’re advancing equality and continuing to provide the support that is needed to actually undo homophobia and transphobia.  What kind of education is needed? How are we reaching people who are barriers to people who want to be who they are and love who they love?

What we did in the campaign against the amendment was antithetical to most voter campaigns. We were asking people to have 15-20 minute conversations at doors with strangers and ask, “What does marriage mean to you? Are you married? Do you know anyone who’s in a same-sex relationship?” Through these really long, personal conversations, we put a face on it. We humanized the issue. And, that’s what we need to continue to do–we need to continue to humanize LGBT people.

Meyer’s ability to weave political and organizational theory from her time at the Humphrey School of Public Policy & Affairs into conversation is valuable as a grassroots organizer. She is credible and knowledgeable while also approachable as a leader. As she told me about the “feet on the ground” philosophy that’s been at the heart of the grassroots organizing with OutFront for years, it’s easy to see its crucial role in the recent fight against the amendment and for marriage equality. By enabling and empowering people to tell their stories and turning them into citizen lobbyists and volunteer leaders, the feet on the ground marched to victory. And, OutFront will continue to empower Minnesotans to move toward full equality together.