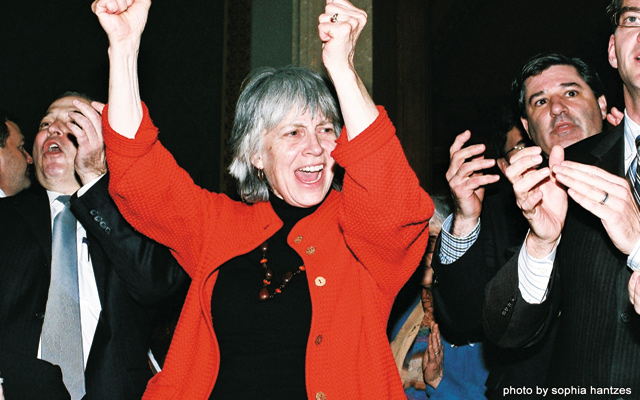 Karen Clark, our own Minnesota state representative, is the longest serving gay or lesbian state legislator in the country. She was honored recently by the White House when she was named a “Harvey Milk Champion of Change,” for her commitment to equality and public service. The White House praised Karen’s work on behalf of low-income, American Indian and immigrant constituents.

Raised in a Catholic family in the predominantly Protestant area of Rock County, Minnesota, Clark learned early about being an outsider. She also learned about justice from her mother, Millie, a strong woman who at one time served as the mayor of the small town of Kenneth, Minnesota. Her parents were hard working farmers with open minds; it was a tight knit family.

Clark studied nursing at St. Teresa’s, a women’s college in Winona, Minnesota.  While she was in college, her older brother left to fight in the Vietnam War.  Clark recalls, “My big brother went off to Vietnam and I was heartbroken.  I always had him in my mind when we were marching against the war. He came back from Vietnam and only lived for about a year and a half; he was terribly damaged by the war. He had Post Traumatic Stress Syndrome, but we didn’t have the words for it in those days.”

By the age of 24 she was living in Minneapolis, working as a public health nurse, and gaining a reputation as a social justice activist. She also found the strength to come out as a lesbian.  When it came time to tell her family, she returned to her hometown. “I remember thinking that they don’t have any support for having a lesbian daughter, I better just stay there, talk to them. One of my big worries was that I had a brother and sister at home, I wondered if I’d be ostracized from my siblings. Well, it was just the opposite, my mother, honest to God, the first words out of her mouth were, ‘Karen, I will always love you.’”

By 1975, Clark had joined the AFSCME union. Her social justice work had led her to Vermont to attend a 6-week feminist theory institute called Sagaris.  There she studied with feminist icons Charlotte Bunch and Rita Mae Brown. In one class the speaker was Elaine Noble of Boston, the first openly lesbian woman elected to political office in the country.  The seed was planted.

Back in Minnesota, Clark continued to work on multiple issues, including organizing lesbians. Clark recalls,  “We started the Lesbian Feminist Organizing Committee, it was a group of activists who wanted to find other lesbians, it was risky to be open.  Our goal was to establish lesbian cells all over the state, we compared it to honeycombs.”

Clark’s network was growing, and her rural background and work with labor unions was of value. She was encouraged and ran for the legislature.  Friend and early supporter Janet Dahlem remembers, “The first campaign was led by a collective of 10 or 12 people that called ourselves the steering committee and that was an unknown model. We had to mobilize and encourage disenfranchised people to believe in the electoral process.”

Clark was elected by a good margin her first time out. It was 1980, and Nobles was no longer in office. Minnesota would earn the distinction of having the only two out elected officials in the country, Allen Spear in the State Senate and Clark in the State House.  It would be six long years before Cal Anderson would be appointed to the Washington State Senate.

Clark recounts her first day on the job, “I was walking around trying to find my office in the building. I hadn’t found it yet. I was still looking and this real curmudgeon of a guy, Tom Ostoff, came up and said, ‘Clark if you think you’re going to introduce that gay-rights bill here you better think again because I live in St. Paul. We just defeated it with our ordinance.’ And I said, ‘and what is your name?’” Thirteen years later, in 1993, Ostoff was one of Clark’s biggest supporters when Minnesota passed the strongest state civil-rights protection for GLBT citizens in the country. Dahlem’s analysis of Karen’s ability to bring people together is that, “she has this unstoppable belief that even people who are arch enemies one day, can be allies the next.”

It was during the big debate on the civil rights bill that Clark’s mother wrote a letter to the editor of her local paper and described her daughter as, “differently blessed.” Clark explains, “She received lots of mail, much of it hate mail. We did not agree on this, but she was pro-life, and she had the experience of having the local pro-life committee tell her that she was no longer welcome to be part of that committee.”  Millie Clark responded to the group that she would bring home her crockpot if she was no longer welcome due to her daughter’s lifestyle. Clark laughs, “She was very sad by it, but her crockpot response is a lighthearted moment for me.”  That summer Joe and Millie Clark would march in the gay pride parade carrying a sign that read: “Our Gay Children Should Have the Same Rights as Our Heterosexual Children.”

Marriage equality came to Minnesota exactly twenty years after the passage of the GLBT civil rights bill. Karen feels the victory, “came from an incredible amount of well-planned and hard-fought organizing strategies that raised the issue of fairness, I think Minnesota’s basic sense of fairness really came to the forefront.”  She knows that if either of her parents were still alive they would have worked hard for the law. Clark continues, “You know the lemon that was delivered to us two years ago with the constitutional amendment, we were able to turn into beautiful lemonade.”

One might think Karen would take it easy after a busy legislative session. But, never one to slow down, she is already planning ambitious legislative goals for next year. In addition, when not in St. Paul, you can find Clark and her partner of 24 years, Jacquelyn Zita, working on environmental justice issues. They operate a farm and non-profit organization in Chisago County called the Women’s Environmental Justice Institute.   Clark adds that it is a beautiful place for a wedding.  For more information on the multi-layered work of the institute visit their website at www.w-e-i.org/.