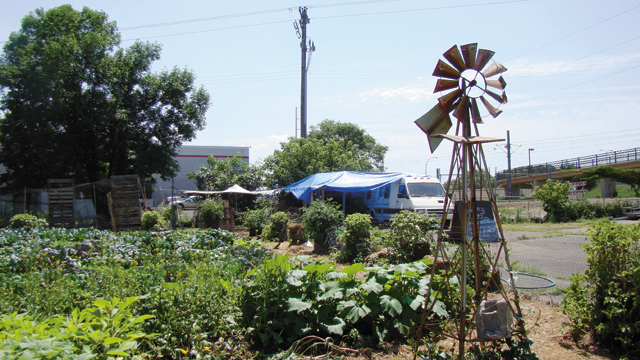 The clanging of a commuter train rolling past rang in my ears as I stood near a crop field in what was once a parking lot, smelling the moist earth and hot asphalt. I was soon joined by Jake Schultz and Stefan Meyer, two of the metro area’s few gay urban farmers.

Meyer grew up in rural Minnesota on a conventional turkey farm and explained that he has always been involved in farming, in one way or another. Schultz had a very different upbringing, as a city kid outside of Milwaukee. It was while studying at the University of Wisconsin-Oshkosh he realized that his passion for food and sustainability after reading the “Omnivore’s Dilemma” by Michael Pollan. 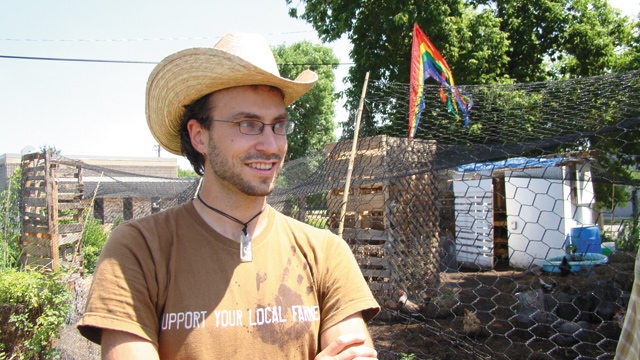 Utilizing permaculture, a method of growing and sustaining people, animals and plant life in balance with nature, Growing Lots Urban Farm has two lots that grow an array of produce. They work with the area community, teaching neighborhood children about their chickens, utilizing waste from nearby businesses, such as Coastal Seafoods, for compost and even setting up giant bins to catch rain water for drip irrigation systems, so that little to nothing goes to waste.

Meyer and Schultz are anxious to share their vision with the world, hoping to be able to reach out to other gay urban farmers to form an eventual coalition. “It’s really rare. We haven’t met many others. It’s easier to find lesbian farmers than gay men,” Schultz mused. I asked him why he thought that was the case.

“I think a lot of us left rural places for the city, for the community; the safety… It’s often the case that we come in to the neighborhoods and clean up, bring in our culture – it makes sense that we would do this as well,” added Meyer.

“We just need more of the granola gays,” said Schultz. 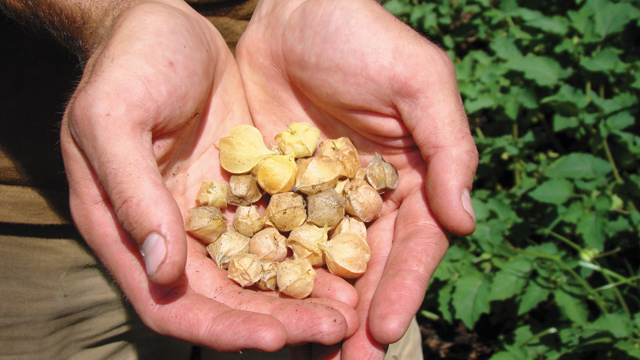 Shultz just grinned, “Sure. I do think that some men are more concerned about working out, moisturizer, clothes, than what we actually put into our bodies.”

Whatever the term, it’s a valid point that most of us urban dwellers would benefit by being closer to our food sources. The juxtaposition of fertile soil churning out baby eggplants, gobs of heirloom tomatoes and a confounding ground cherry breed that tasted like a bursting pineapple with the nearby traffic noise was oddly comforting. In addition to their produce, sold mainly through CSA shares, Schultz also has a bakery, Black Paws, and can be found at the Midtown Farmer’s Market every Saturday.

The chickens produce beautifully pale green- and brown-shelled eggs. Unfortunately, they were informed the day after I visited that due to zoning restrictions the birds would have to be relocated, a sad day for the farm.

From classes to a culinary CSA specializing in unique produce, Growing Lots will hopefully continue to expand and share their sustenance with a grateful neighborhood. To find out more, visit them on the Facebook pages for Growing Lots Urban Farm and Black Paws Community Supported Bakery.

Saute the chopped cabbage and beet greens in a frying pan over medium heat with a little olive oil.
Sprinkle in the salt, pepper, and cumin to the mixture and saute for about 2 minutes or when it just starts to soften.
Shape the greens into two ‘baskets.’ So they look like little bird’s nests.
Crack the eggs into the baskets and sprinkle the mozzarella and basil over the top.
Cover the pan and let the steam cook the eggs until you liking.

Simplicity at it’s best. Yet so surprisingly delicious.