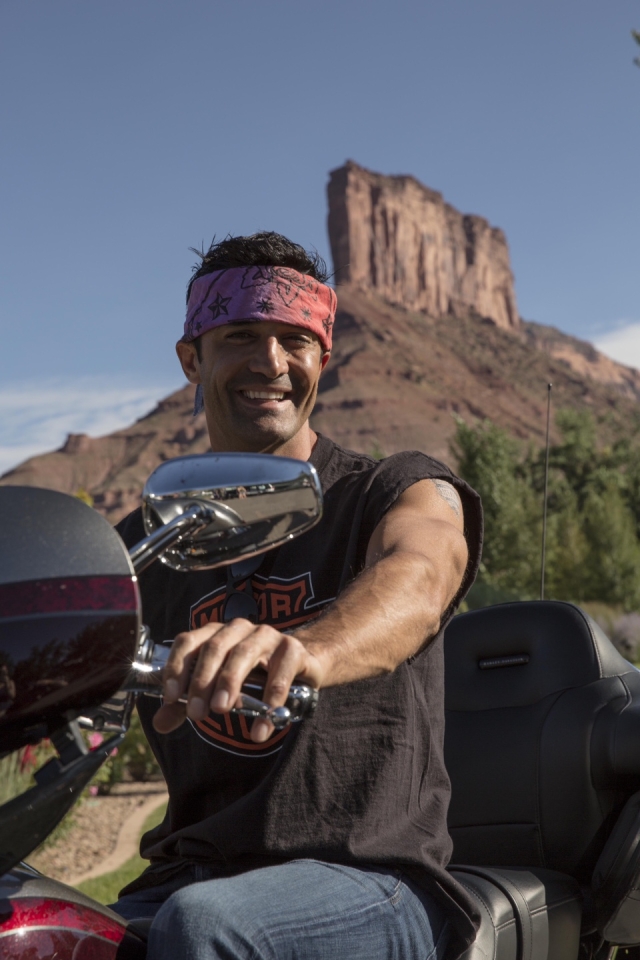 Gilles Marini is well-known by the GLBT crowd. From Sex and the City to Devious Maids, he has made his way around the GLBT-audience circuit. But he is more than an infamous shower scene, in fact Marini is commonly known for his charitable record as well.

Having now participated in several Kiehl’s LifeRide for amfAR events, Marini is well-versed in the cross-country trek.

“Kiehl’s is a company that is very much involved in the fight against AIDS,” Marini said. “And, where I grew up and how it affected my life, when they asked me if I wanted to be involved, absolutely. I wouldn’t pass it up. Now I clear my schedule for it every year.”

This year’s Kiehl’s LifeRide for amfAR, beginning in Denver and ending in San Diego, marks the sixth year for the event. Riding across country on motorcycles from August 3–15, Marini joined Kiehl’s once again to raise money for amfAR’s HIV/AIDS cure-focused research.

Riding a motorcycle across the country is a lot like surfing, according to Marini. “The way it’s so free and you have to be so concentrated on everything around you,” he says, “You really enjoy scenery a lot more. The ride is very long and straining and difficult, but it also reminds you why we do this. If the journey we are taking is hard, it’s easier to relate what we do to the charity.”

Marini, who has been riding motorcycles for 25 years now (he says he has right bikes now: “I have to stop.”), has always been aware of his desire to be meaningful in life. “When you don’t help people, you get very empty very fast,” he says. “My mom was like that too. My mom and my dad always gave whatever they had, to a fault. But I feel like since I have a little bit more pull and power, I kind of use that fame or celebrity to change for a better world. Without that connection, I would be an empty shell. So doing this for me, it fills me up with pride and respect. Sooner or later we all die and I want to be remembered as someone who wasn’t selfish.”

Throughout his career, Marini has been very aware and appreciative of his gay fans. Marini got his start at 18 as a model, where he met photographer Fred Goudon.

“Fred really introduced me to this community that eventually, every step of the way, took me to where I am,” Marini says. “So I’m well aware of how stunning this community is and I’m very much thankful to the community. And, as you know, the community was hit hard by AIDS, so it fuels what I do and what I can do today. I owe the community so much. I absolutely would not be where I am without them.”

He takes that appreciation one step further than many celebrities by maintaining connections via social media. In an age where you never know who is the person behind the tweets – is it an assistant, or is it really them? – Marini will always maintain control over his accounts.

“I’ve decided to never let people touch my Twitter and Instagram; it’s always me,” he says. “I always answer myself and I never let anyone do that. I wish I had more time or understanding of how it works. I think it’s a little bit more meaningful. When I’m on a trip like [Kiehl’s LifeRide] I try to take a picture and share what I see so people can see how beautiful America is who don’t have the chance. Right now I’m looking at a national park. I can’t believe these mountains just somehow showed up here.”

Post-motorcycle ride, fans can expect to see more of Marini on-screen. The actor finished filming his current projects, but is on the lookout. “I’m coming back from the trip and I’m going to have to work on getting something new,” he says. “And it’s always a challenge and it’s scary, but it’s what I do, you know? I want to do something that people will be shocked.”

And, by the sounds of it, fans won’t be let down by the shock factor. He shares with Lavender that viewers of Devious Maids are in for a treat with the rest of the season airing this fall.

“Let me tell you, the last couple episodes of Devious Maids will be shocking,” he shares. “You’ll be saying ‘Oh, no, he did not.’ You’ll never see it coming. It took a couple of weeks to get prepared for it and then a couple more weeks to get over it. I can’t wait for you to see it.”