Genghis Khan and the Quest for God: How the World’s Greatest Conqueror Gave Us Religious Freedom 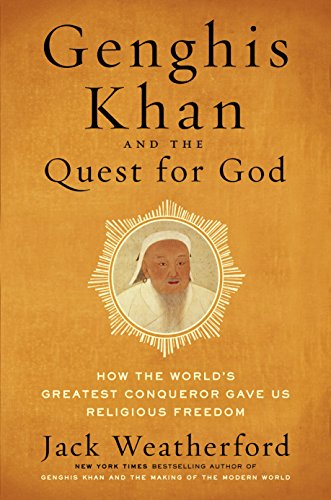 Genghis Khan was a self-made man. In fact, for the first seven chapters of Weatherford’s fascinating biography, he was not the Great Khan, but simply Temujin, born in 1162 to the warrior Yesugei and his stolen wife, Hoelun.

“Much of what we know about Genghis Khan’s early life,” explains Weatherford, “comes from a document known as The Secret History of the Mongols, composed two years after his death.” Written in code and hidden away, it was found in the 19th century and decoded only in the 20th.

After Yesugei was murdered, the history runs, his two wives and their children were not allowed to worship the ancestors, and were driven out onto the steppe to die. But they survived, and Temujin stepped onto his warrior path, bringing the people of the steppe under his rule.

In 1206, he took a new name (“Chinggas,” or “Genghis”) for himself and “Mongol,” for his nation and people, never explaining the reason for or meaning of this word. Secrets, he realized, are part of the power of knowledge. As lord of millions who practiced myriad religions, Genghis Khan became fascinated by the power that religion held, and determined to enlist that power on behalf of his empire.

Rather than attempting to unite the various religions, he sought specifically to keep diversity. By placing men of different religions and ethnicities in various groups, he could utilize their unique skills while preventing any one religion from gaining ascendancy and therefore maintain tighter control. Weatherford stresses that Genghis Khan was by no means offering his people political freedom, “but offering instead protection, stability, and total religious freedom” uniquely for the individual.

As presented by Weatherford, Genghis Khan was not so much questing for a personal god, which he had earlier found in the pure winds and sacred waters, shining light and snows of the mountains, but “had clear motivations for his religious policies.” At his death in August 1228, he was returned to his mountain, Burkhan Khaldun. There was no tomb or mausoleum, no new religion; Genghis Khan died a Mongol.

Weatherford found his inspiration for this book while writing his Genghis Khan and the Making of the Modern World (2004) on Edward Gibbon’s The History of the Decline and Fall of the Roman Empire (1776–89). Gibbon, who himself had been variously Catholic, Protestant, and Deist, had found that Americans, particularly Thomas Jefferson, looked to offer citizens a total religious freedom and a complete separation of church and state. After much study, Gibbon had also concluded that in the matter of handling god and politics, one leader had stood above all others: Genghis Khan.

Weatherford embarked on this volume in an effort to link Jefferson and Genghis Khan, and he came this close. Jefferson had read and reread, both in the original French and English, François Pétis de la Croix’s The History of Genghizcan the Great, First Emperor of the Ancient Mongols and Tartars (1710), and had given multiple copies as gifts. In this volume he found the text of the Mongolian Law of Religious Freedom, from which he gleaned, reports Weatherford, that “religious freedom was an individual right, not a prerogative of the church.”

Jefferson, like Genghis Khan, was a quester; he studied religions, owned a Quran, and ruthlessly pruned his Bible down to what he believed was the true philosophy of Jesus. The two might well be in concord across the centuries. The Great Khan never converted to any of the many existing religions, pointing out that none of them had saved their peoples’ countries from him, and asking, “Why should I descend from lofty trees to enter a dark valley?” Some 500 years later Thomas Jefferson wrote, “I am of a sect by myself as far as I know.”

Weatherford has written an eminently readable and exhaustively researched biography illuminating unknown aspects of Genghis Khan while raising questions about power and religion with which we still struggle today.