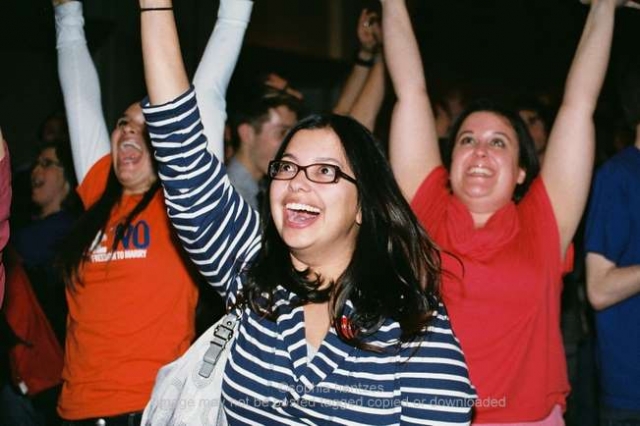 We did it.  Hallelujah, we did it.

It would seem like the GLBT publication of the state that just defeated an amendment discriminating against the community would be dripping with victory coverage the week after the election.  Clearly, it’s not.  The election happened just as we were putting this issue to bed, so we unapologetically present our Holiday Gift Guide just in time for the day after Thanksgiving.  But, believe me when I tell you that I’m pretty sure the VOTE NO campaign and election results will get their due coverage in the year-end issue.  I have it on good authority.  Ahem.

Where were you when you got the news that the state Voted NO?  Were you at RiverCentre with Minnesotans United for All Families?  Were you snuggled on the couch with your family anxiously keeping the proverbial candle vigilantly lit for the returns to be in our favor?  Were you at a local bar in the time between last call and closing time? Were you in your pajamas the next morning flipping through channels or clicking through the internet?  The hour was wee, the moment was historical.

I was at RiverCentre taking pictures of the speakers and happenings to post them on Lavender’s Facebook page as the evening progressed.  It wasn’t the usual, objective position for a person in the media to take; I am invested in this.  No, Lavender didn’t get involved with the rest of the politics of the campaign since our audience base is politically mixed, but Lavender clearly took a stance against the amendment.  And, I wanted to be there both in solidarity as well as to document the crucial moments of the night as the election results came in.  The vibe was that of cautious optimism.  It ended in relieved euphoria.

So many hugs. So many tears. So many smiles. So much relief.

And then we went home.

Leaving the rally to go to the parking ramp at 2:00 in the morning was surreal.  Hugging along the way.  Starting up the Jeep, driving out with other vehicles stamped with VOTE NO signage.  Driving along the empty streets of St. Paul to a nearly deserted I-94 to then get home to hunt for parking by my loft.  Walking the dog in a near-dead state of shock.  Catching up on Facebook and seeing how many people were at the rally via social networking.  Crawling into bed at 4:00 to lie awake until 5:00. Waking up to the rest of Wednesday that was going to happen regardless of the election results.

Rest.  This community has been working toward November 6 for so long—that it’s come and gone deserves the same acknowledgement and reverence as any big event in our lives.  We go through it, we come out on the other side, and we rest.  We regroup.  We evaluate.  We play.  We take some “me time.”  After fertile there is fallow.

Just take a time-out.  At the United for Our Future Rally at the State Capitol on Wednesday, November 7, it was stressed that we need to celebrate.

Heck, we need to soak in celebration until our fingers get pruney.  It has been earned.  It is deserved.

Then, as we emerge from this big event and the aftershock, we’ll start keeping regular sleep hours again.  We’ll eat more healthy meals again.  We’ll stop seeing each other so often.  We’ll see more everyday posts on Facebook.  We’ll go shopping for the holidays.  We’ll pick up life as usual.  We’ll miss each other and we’ll miss the activity.

And then we’ll look to our leaders for what will be coming next.  To avoid being partisan, I’ll say that our new State Legislature is poised to be the most receptive to GLBT rights than it has ever been.  We have every reason to have high expectations of our leaders; their feet will be held to the fire.

The wishy-washy element to this next phase of GLBT rights is that there is no date that is on the books like there was for this amendment vote.  We all had November 6 burned into our brains—we knew we’d have an answer on November 7.  We were working for it like I’m working toward today’s print deadline: it’s over when it’s over.  The goal either will or will not have been achieved.

Next, we have to articulate our goals.  We have to impose our own deadlines.  You know how this works—we’re better when we’re working with concrete expectations.  Humans are terribly predictable.  And, being that our legislature is made up of humans that we have elected to represent us, we have to ask the same of them.

My own cautious optimism has turned into reasonable anticipation.  I anticipate more progress.  I expect it.  We have a long way to go toward equality for this community, but the time has never been better to get out there and demand it.

I’ll see you out there.