From the Editor: Coming Out 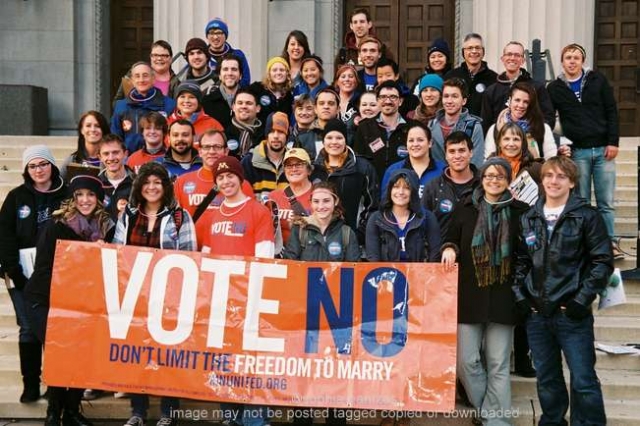 They’re all right here: in these pages, on our minds, in our hearts, and on the ballot in Minnesota on November 6.

QUORUM held its 19th Annual National Coming Out Day Luncheon in mid-October.  As one of the inspirational speakers, Anna Min spoke to us about how many different communities we can identify as being a part of–it was a powerful speech.  Anna asked us to stand when we identified as a member of a particular group; in essence, we were coming out. If I understood it correctly, the goal of the exercise was mostly to prove a point that we are multi-faceted, which we are.  Thinking about it more, in coming out, it also shows just how exhausting life can be when we represent ourselves so actively in so many different areas.  Personal and private issues are pushed into the public with these actions, such as when we stand up…when we come out.
We are activists, simply by existing.

When I say that we actively represent ourselves, I’m talking about coming out and what coming out means these days.  Anna asked us to stand up if we identified as parents, queers, bicyclists, managers, allies…but the list could be endless, really.  Especially in this era of self-publishing on the social networking sites like Facebook, we self-identify and come out whenever we “Like” or “Share” a post.  Joining a group on Facebook can out us as being GLBT or simply for admiring an idea. Our personal is political. Being multi-faceted is something to acknowledge and celebrate.  It also might necessitate a nap.

Think of all of the coming out that’s happened since May of 2011 under circumstances that we didn’t ask for–that we didn’t choose–with verbiage that is confusing and discombobulating.  A proposed amendment on the upcoming ballot that limits marriage to being a union between a man and a woman–in a state that already does not allow same-sex marriage–means that we have had a fight on our hands to keep discrimination out of our state Constitution.  It’s taken time.  It’s taken money.  It’s taken energy.  The message this community has had to repeatedly and relentlessly send was determined early on in the campaign: “We believe that marriage matters.  To all.”

We’ve had to come out.  Repeatedly.  Again and again.

There have been multiple groups that have formed since then…from those that are focused on defeating the amendment this year to those that are fighting a longer battle for marriage equality.  All groups have been tireless and welcoming.  Our Pride events were covered in blue and orange as Minnesotans United for All Families recorded our intentions, organized us, and mobilized us.  This issue has defined many of us.  Never before have so many people in the state come out en masse in support of GLBT rights.  This is historical.  There is no turning back from this movement.  There is no “going back in.”

Just as we are multifaceted, so have been our methods of coming out, of standing up against this discrimination:

1. Updating our pictures to say we will be VOTING NO.
2. Having conversations about why others should VOTE NO.
3. Writing letters and sharing stories about how VOTING NO affects us.
4. Sharing a VOTE NO image on Facebook.
5. Donning a VOTE NO t-shirt.
6. Wearing a button or pin in support of marriage equality or to VOTE NO in NOvember.
7. Waving a VOTE NO fan at the State Fair.
8. Wearing an orange ring that indicates EQUALITY FOR ALL.
9. Wrapping a vehicle in VOTE NO decals.
10. Going to a house party for people who are VOTING NO.
11. Listening to a concert by musicians who are VOTING NO.
12. Meeting athletes who are VOTING NO.
13. Seeing signs at places of worship stating that people of faith will VOTE NO.
14. Leaving this Wedding Issue on a table at the coffee house, inviting people to VOTE NO.
15. Eating baked goods that say NO.
16. Sharing videos of people explaining why we need to VOTE NO.
17. Going to rallies where we can be with others who will VOTE NO.
18. Putting a VOTE NO bumper sticker on our vehicles.
19. Running or walking in races that have been Big and Gay for VOTING NO.
20. Crawling in Pub Crawls to raise money for VOTING NO.
21. Door knocking for VOTING NO.
22. Calling citizens to have conversations about VOTING NO.
23. Quietly complimenting another person in a VOTE NO shirt.
24. Posting a VOTE NO sign in our yards, hanging them from our trees.
25. Donating money. Donating money. Donating money.  Our bank accounts are VOTING NO.

Out, out, out.  VOTE NO, NO, NO.  See how each of those is in the present tense?  We’ve been coming out and doing all of these things during this campaign…and we’ll need to continue after this campaign, just with a different message.  On November 7, we’ll be looking at a different Minnesota.  It might be that we’ll have an amendment in the constitution that discriminates against tax-paying Minnesotans.  It might be that we’ll be rejoicing after defeating this proposed amendment.  Either way, we’ll need to keep coming out and fighting for what this community deserves: equal rights.

Either way, we will be proud of what has been accomplished since May of 2011.

I want to stand up again.  I want to come out and applaud all of you for your daily heroism in being yourselves, however you self-identify.  I want to continue to see your weddings that aren’t legal here, yet.  I am impatient for the time when they will be legal here.