From the Editor: Celebrate Love!

Welcome to Lavender’s 2013 Pride Issue. The theme is “Celebrate Love!” and we couldn’t be more excited about it. Looking at the cover, it’s all about what we can celebrate and what we can look forward to in the state of Minnesota this summer. And so much more.

1. The State Capitol:  Where history was made in May, 2013, with the passage of marriage equality in Minnesota. People sat in the galleries of the House and Senate and listened to the testimony of legislators with rapt attention. Singers and sign-holders and protesters filled the hallways outside the chambers and called for them to vote “yes.” The Governor signed love into law on the steps as the community watched, with pride.

2. The Colors: Clear and proud is the rainbow Pride flag behind the Lavender logo. People are wearing bright colors as they strike ecstatic poses on the steps of the Capitol, which is surrounded by orange. Color has meaning. Here, it is celebratory. It is gay. It is bold.

3. The Pride Award Recipients: In an among the celebrants on the cover are members of Shades of Yellow (SOY) and Brent Dundore, himself. SOY has been a strong presence in the Twin Cities for 10 years representing the Hmong community and is receiving the Community Pride Award. Brent Dundore is the winner of the Everyday Hero Award and has been a gem of an artist and activist. I have truly enjoyed collaborating with him these past few months. His Marry Us photo campaign gave a striking visual element to the fight for marriage equality and this cover is iconic.

4. The Family: Paul Melchert and James Zimmerman stood up and spoke out for marriage equality, both against the amendment and for the freedom to marry. Though they were married years ago, they agreed to pose on our cover (and are wearing their wedding suits for the occasion) with their twin boys, Emmett and Gabriel. This fight was about family, theirs and so many others.

5. The Officiant: Bradley Traynor is a Lavender favorite who spent six years of his career here before moving to myTalk 107.1 as a weekday radio personality. You’ll see more of Brad during PRIDE events, like PRIDE in Concert, at which he will be the emcee.

6. The Fact that There’s No Channing Tatum: I’ll leave it at that.

In celebration and with love,
Andy 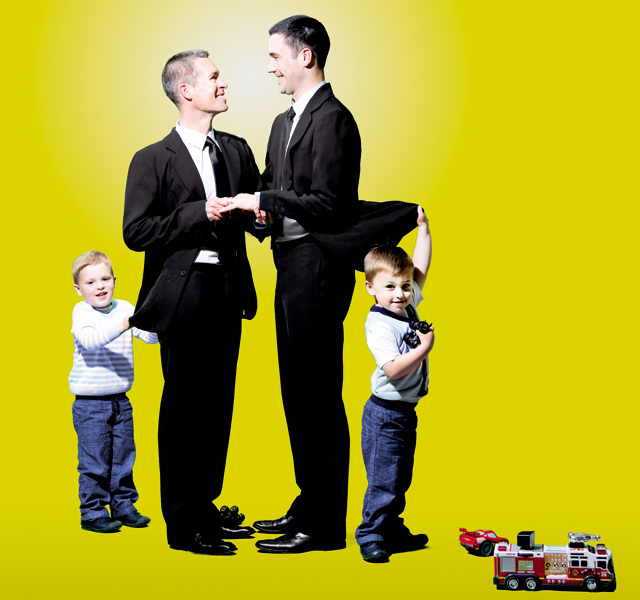