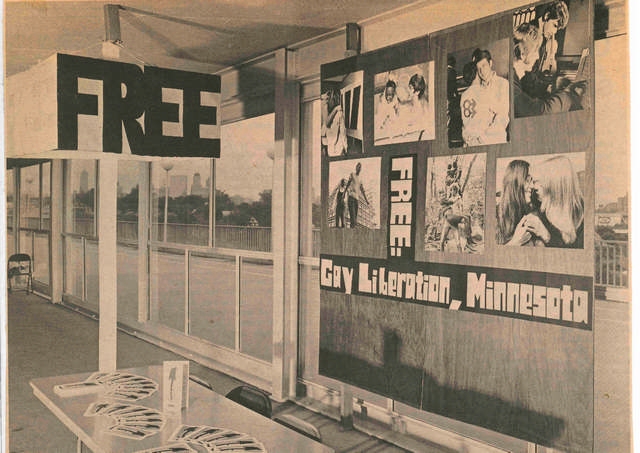 In the United States, the decade of the 1960s was a hotbed of political and social change: the antiwar movement protesting the Vietnam War; the black civil rights movement; the women’s movement; and the American Indian movement. It was indeed a most exciting time.

For the gay community in the 1960s, pre-Harvey Milk San Francisco was a beehive of activity. In 1961, Jose Sarria was the first openly gay person in the nation to seek elected political office; in 1965, he established the still-flourishing International Court System, of which the local Imperial Court of Minnesota (ICOM) is a chapter. In 1967, the Society of Individual Rights (SIR) was organized. In 1968, Reverend Troy Perry established Metropolitan Community Church (MCC), which eventually grew into an international body that includes our local All God’s Children MCC.

In Minnesota, by early 1969, the gay community consisted of what some have called the four B’s, our only gathering places, mainly in Minneapolis: bars like the 19 Bar (dating from 1952) and the Gay 90’s (the Happy Hour part dating from 1957), both still in operation; bookstores, like sex purveyor Ferris Alexander’s adult establishments; bathhouses, like the Hennepin Baths; and bushes, like Bare Ass Beach on the east bank of the Mississippi River in Minneapolis.

In the spring of 1969, two courageous young gay activists, Koreen Phelps, 20, and Stephen Ihrig, 21, envisioned a brighter future for our local community. Not knowing how to make it happen, they contacted Leo Laurence of SIR in San Francisco, who became their mentor. On May 18, 1969, the two visionaries, under the auspices of an organization called FREE University, began by teaching a class called “The Homosexual and Society” at the Coffee House Extempore in the West Bank area of Minneapolis near the University of Minnesota. That’s the real birthday of the gay movement in Minnesota. We’re marking its 50th anniversary this year.

An article by S. Jane Albert that appeared on June 20, 1969, in The Minnesota Daily, the U of M newspaper, was headlined “Free U starts ‘homosexual revolution.’” That headline says it all. This article is the first published account of gay liberation in Minnesota, at its very birth.

Albert aptly began her article this way: “First there was Black Power. Then Red Power. And now, through the efforts of two former University students, pink power has come to Minneapolis. Gay Power, as it is properly termed, is a homosexual movement that seeks to change the laws, attitudes and prejudices of uptight, upright heterosexual America.”

Meanwhile, six weeks after Phelps and Ihrig’s class started meeting, New York finally caught up to San Francisco and the Twin Cities. The Stonewall Riot in New York City began on June 28, 1969, as a protest against the latest in a series of police raids on the Stonewall Inn, a gay bar.

Ironically, although San Francisco had been the preeminent center of gay activism for years, the Stonewall Riot in New York City soon became the catalyst for gay liberation everywhere. This event has been celebrated ever since as the beginning of it all. The first Gay Pride Celebration on June 28, 1970, in New York City, exactly a year after Stonewall, spread to similar Pride observances in other cities, including Minneapolis-St. Paul in 1972.

Minnesota can be enormously proud that our own gay liberation movement, influenced at first by San Francisco and not New York, got under way six weeks before Stonewall. Unfortunately, a common misconception has it the other way around: that Stonewall sired FREE. But we know better, don’t we?

What became of the founders of FREE? Phelps continued to be a gay and women’s activist locally until her death at age 58 in 2007. Ihrig moved to New York in the 1970s, but I unfortunately lost contact with him years ago, so I am unsure of his fate. Our local community certainly owes much gratitude to these two farsighted pioneers.