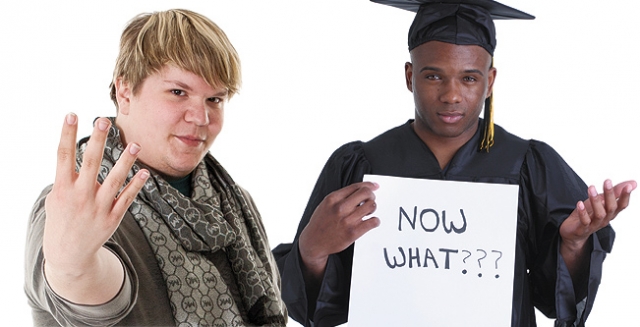 At high school graduation parties, people always say, “Get ready for the best four years of your life.” But now you’re on the other side of those four years, waiting in a never-ending line to be called for your diploma. Now, suddenly the rhetoric has changed as people around you are saying those were the best years of your life. In the blink of an eye, it went as fast as it came, and now you are shaking the hand of the university’s president as he congratulates you on graduating, unsure if there will ever be another “best years of your life.” Terrible imagery, isn’t it?

It was a year ago that I received the most expensive piece of paper of my life: a college diploma. That mere 8 1/2″ x 11″ sheet of paper not only cost tens of thousands of dollars, but also symbolized what was to come. Holding a diploma in your hand for the first time, the possibilities seem endless; changing the world while maintaining a social life seems plausible, for some reason. This optimism quickly gives way to reality, and that reality comes in the form of a quick, sharp slap to the face since no one at the university warned you about the “real world.”

Within the happy bubble of the university, everything is rainbows and sunshine. Advisers assure you that you’ll find a job, professors instruct you to hold onto those final projects (they allegedly make great portfolio pieces—personally, I haven’t met an employer yet who actually wanted to look at them), and the financial aid office never lets on that crippling student loan payments await.

Newsflash: Today’s students graduate from college with heavy debts, and many aren’t reaping the benefits of that education. Last April, New York Daily News reported a poll showing recent grads often find jobs that don’t require a college degree, more than 40% are unemployed, and 16% are in part-time positions. What pairs with unemployment like a fine wine to a steak dinner? Debt. There are currently more than one trillion dollars worth of student loans in this country; loans that the government has so gracefully decided to charge  3.4% interest on. How nice of them! Hello, statistics and goodbye, optimism! So much for a promising future, right?

Faced with so many uncertainties about the future and some hefty debt, I did what any sane and rational person would do: go back for more. No, I was not down for the count; I take a beating and keep on going. Yes, I went back for graduate school this past fall (here you go, university, take more of my money, please). But in that space between undergraduate and graduate school, I managed to fit in a few life lessons that I wish I had expected as a senior in college.

You are going to be poor. Dirt poor.
Most graduates are probably at least semi-prepared for this one. Especially if, like me, they had received a liberal arts or social science degree. As my parents reminded me, “You live in Minnesota…what are you going to do with a dual degree in journalism and African studies?” Touché, Mom and Dad. Touché. That whole “follow your passion” thing only takes you so far. It doesn’t necessarily pay the bills quite like an engineering degree, but I was able to brace myself.

After all, I had learned how to stretch a buck as an undergraduate: only ordering appetizers during happy hour or only buying clothes on clearance, right? Wrong. Post-grad life requires more than stretching a buck, it requires making a dollar out of fifteen cents. Now you are basically spending money on incidentals. And, to be clear, an incidental is not “We walked to McDonalds and, before I knew it, I super-sized a number four.” An incidental is like your pre-existing credit card bill. Say goodbye to your daily grande-skim-milk-non-fat-white-mocha latté. Starbucks and I once had a pretty intimate relationship, going hot and heavy for a while, but when I graduated last May we went through a bitter divorce. I still pay alimony once a month, but I can only afford that one payment.

And let’s not even discuss how quickly the school’s alumni association will begin calling to ask for “donations.” Apparently my tuition (and subsequent debt) wasn’t enough.

Your résumé probably isn’t that special and you’re actually quite disposable.
Somewhere along the way, we were told that our four internships, great GPA, and senior projects were an amazing edge in the workforce. But, really, the truth is that most of the people with whom you are competing for jobs are going to have similar qualifications. Unless you’re some sort of freaky prodigy, your résumé probably looks similar to others. Sorry to burst that bubble, but it’s true. Even if you have a pink scented résumé, Elle Woods already famously did that in Legally Blonde. Now, a green scented résumé…that’s different and original. But, still, the content is probably close to the same as plenty of others. You’re not special. And if you stop thinking that, your transition into post-grad life (whether unemployed or not) will be much easier. You are about to enter a world where hard work and long hours will only help you not get fired in your first two years. It’s a world where all those “you’re special” or “you’re one of a kind” talks your teachers, professors, and parents buttered you up with come to die.

Assuming you are able to land a job (tip: just keep trying; they say the average time to land a job after graduation is six to eight months), no matter what you are doing, you will most likely be at the bottom of the totem pole at your place of work. The truth is, with most entry-level positions, you are disposable to a certain extent. Like I said, there is a whole stack of résumés that look similar to yours that your employer can always fall back on. Menial tasks will fall across your desk – the things that no one else wants to spend time doing—and you smile and nod your head because, truthfully, you’re just happy to be employed. Sure, you will try to pick up the slack and seek out stuff to do to make yourself feel important, but as you waste away the hours on Buzzfeed, Twitter, and www.PostGradProblems.com, you’ll begin to meticulously cultivate an insanely low sense of self-worth that can only be saved by shopping sprees on Amazon. That is, until you have a full cart and realize you can’t actually buy these things (see lesson number one). Enlightening, I know. I promise, it gets better.

Uncertainties about the future will set in…and you’ll handle them horribly.
Post-graduation, there is this magical thing called summer. Many of us haven’t seen summer vacation in quite some time what with summer classes, internships, and working on projects that were supposed to give us an edge (see lesson two). This post-grad summer is often an experience of first and foremost applying for jobs, which can feel like a full-time job in and of itself. But that is spliced with lounging by a lake, sipping on bottomless mimosas at a rooftop brunch locale (bottomless is crucial; gotta stretch that dollar—lesson one!), or finally obliging your parents on that trip to the cabin “up north.”

At some point as you frolic through your idyllic summer experience, you’ll begin contemplating your future. You start churning over not just what the next year holds, but the year after that, and the year after that. Soon, you’ll realize that unless you want to be Charles, the 43-year-old “bachelor” with the 4×6 picture of his mom in his cubicle and the perpetual mysterious stain on his shirt from lunch that he got from the food truck across the street, you’ll have to go back in time and get a 4.0 from an Ivy League school to get that dream job at Google where you take a slide to work every day.

So you combat this foreboding sense of “eff my life” with multiple cups of coffee in order to spur you to get your life together (if you doubt the relationship between coffee and anxiety, simply refer to every college student ever). In a feeble attempt to follow your dreams, you’ll update your résumé and LinkedIn page, and try to clean up your Facebook. But we all know that’s impossible because, gosh darn it, you and your buddies looked awesome that one Halloween dressed as the guys from the Channel 4 News Team with alumni Charles bonging beers in the background. Thoughts of potential employers be damned. The next day you’ll return to work and start the anxiety cycle all over again by first realizing you don’t want to be Charles. But don’t worry; the cycle can be broken and at some point in that summer or shortly thereafter (assuming you’ve actually done the work) you’ll begin to settle into a workplace that is aligned with what you imagined for your future. It may seem like a giant lie as you enter your post-grad summer, but trust me. I’ve done it.

You’ll have more fun than you ever imagined.
If I’ve gotten you all distraught and downtrodden with my previous three lessons, I apologize. You could say that my first year out of college has made me a cynic. I’ll own up to that, but, truthfully, I wish someone had told me these harsh lessons somewhere along the way instead of forcing me to figure them out the “hard way.” There’s no doubt that you’ll experience a year of pain and self-questioning during your post-grad fun hangover. Welcome to the real world chump, good thing you spent your senior year working harder than Lindsay Lohan trying to get sober to get that 3.7 GPA.

Yes, there are some hard lessons to learn that must be taken with a grain of salt, but that first post-grad year is also a time for exploration and fun. My final, and perhaps most important lesson, is to enjoy yourself. Enjoy the work you end up doing and enjoy the occasional get together (and subsequent financial splurges) with friends. I mean, you’ll be doing this for the rest of your life, so you might as well have fun with it. Despite my best efforts to scare you into the depths of never wanting to grow up (something I call Peter Pan Syndrome), I promise it’s really not that bad. Yes, anxieties about finding a job abound, but that also means you finally have the opportunity to try things you’ve always wanted to: travel to a new locale, even if it’s just a neighboring town, or go on an adventure with a friend to that new vintage store that opened up (even if you don’t buy anything—again, gotta stretch that dollar). Enjoy all that life has to offer. Follow your joy. Whatever makes you happy, go toward it with full gusto. Maybe you have to take on a not-dream job on the side to help financially, but keep the end in sight. Within a year or two you will have gained crucial experience in the workplace of your choice. Even if you were initially disposable, with this new experience, God knows you’re now as irreplaceable as Beyoncé.