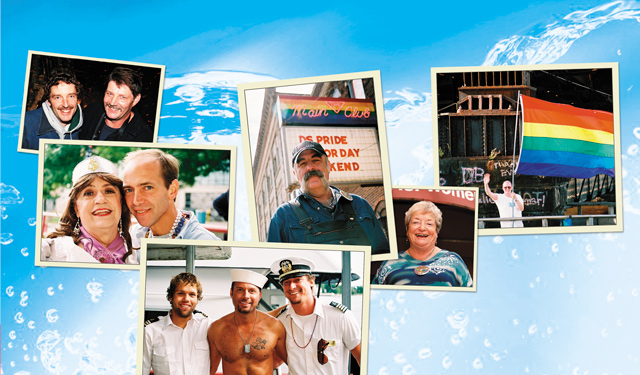 When the Main Club opened in 1983 in Superior, Wisconsin, owner Bob Jansen would host a picnic during June Pride weekend celebrating “Happy Homosapien Days,” as people were abated to say the word “gay,” recalls Jansen. A few years later, a Pride Picnic was hosted on the Lester River in Duluth by three men. “It was a nice sunny day with a potluck and a few beers,” Jansen explained.

Next in memory is Jansen’s interaction with a member of the “Minnesota Pride Committee.” Jansen told one of its members that Duluth-Superior was going to have a Pride Festival. He was told, “You can’t have Pride; we are having it in the Cities.” Jansen said his reply was, “Watch us!”

This Labor Day Weekend marks the 25th Anniversary of Duluth-Superior Gay Lesbian Bisexual Transgender Queer Allied and Intersex Pride Weekend; the weekend starts on Thursday. Over the years so much has changed. It has grown from a picnic on the Lester River to a full-blown regional festival at Bayfront Festival Park, the largest outdoor stage venue in the Twin Ports.

In the distant past, we cannot forget the 1969 Stonewall Riots in Greenwich Village in New York City after one too many police raids at a gay bar, The Stonewall Inn. Patrons took the streets rioting, rolling police cars, and starting fires. A year later, the Riots were commemorated and as Pride was born, the festivities began to sprout around the globe. “It is rumored that [Duluth and Superior] police request to work the Pride Festival,” explains Jesse (Dykhuis) Campbell, one of this year’s Pride Committee Co-Chairs. “I feel a tremendous amount of love from our public figures…Pride reminds folks about our history and builds a sense of community spirit that is felt months after the Pride season is over,” she explains.

Dianna Hunter, another long-time member of the queer community of the Twin Ports remembers the first few Pride events in Loring Park in Minneapolis in the early 1970’s. “The rallies were smaller than Duluth’s present festival, and the parade was similar in size to the ones in the Twin Ports now,” she said. Hunter, who was honored a few years ago with the “Dinosaur Award” for lifetime service, has enjoyed watching the events grow here over the years. “This forum [Pride] lets us celebrate our accomplishments. Like the people in every other social justice movement, we really need community and celebration as well as outrage and hard work,” she explains. “We’ve come a long way, but we’re still in a civil rights struggle,” observes Hunter. Without such celebrations, she explained, it’s easy to burn out.

The social impact on the local community seems almost tangible for Josh Miller, a now 6-year resident of Duluth. “I consider Duluth a very gay-friendly city,” explains Miller. “By incorporating elements like the Mayor’s endorsement through a Pride event, I believe that acceptance has grown over the years. A shrinking minority of bigotry is simply fading away,” he said. Miller has friends from Canada who make an “annual pilgrimage” from Winnipeg to attend Duluth-Superior Pride.

The Duluth-Superior Pride Committee is usually comprised of about 20 people who organize, fundraise, and publicize the events. Campbell reports that the Committee adds and tweaks things based on feedback from attendees.

Miller’s enthusiastic remarks are exactly what seem to draw people to this particular Pride festival. According to him, “DS Pride is the most unique pride event in the entire country. Duluth and Superior have so much to offer as destinations for beauty, entertainment, and fun. When you marry that with the events of Pride weekend, it makes a perfect recipe for a truly unique experience.” Miller continues, unable to hold back, “other cities enjoy park events with vendors….how many Pride events include cruises, train parties, dinners, and an outdoor concert overlooking the largest inland port,” he asks?

In fact, Out Magazine named it “The Hottest Small Town Pride” in 2005. As the popularity has grown, times keep changing. Allies, faith-based organizations, and rainbow families are ever-present.

We are in a time of increasing change and uncertainty about a lot of things in the world. One thing remains true, however. That is, the baby boomers who started the movement are aging. I think it’s high time we thanked our courageous GLBTQI and Two-Spirit elders and honored them. If you are one of our elders in Duluth and wish to join the GLBTQ Elder Network, or you are someone who would like to help our elders, please contact me at [email protected] or call 218-726-7300.

Angie Nichols is the founding Director of GLBT Services at the University of Minnesota Duluth since 2000 served two years as Duluth-Superior Pride Co-Chair, has received the Pride Award and is a former columnist for Lavender Magazine.