Dr. Wallace “Wally” Swan on his Book about What the GLBT Community Needs to Focus on Now That Marriage Equality is Becoming a Reality 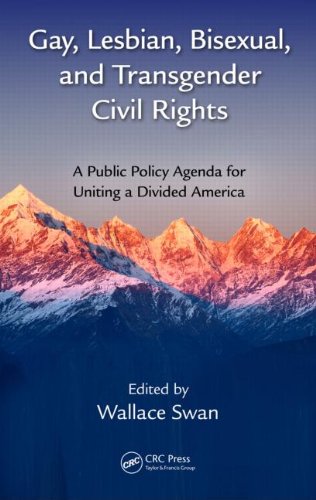 Dr. Wallace “Wally” Swan was the first openly gay man to be elected to a city office in Minneapolis. He served three terms as Vice President and President of the Minneapolis Board of Estimate and Taxation ending in December 2005. He established himself across social divisions as a man who cared and cares deeply about the well-being of the GLBT community and the rest of the society that we all share. Swan’s wise influence was also part of what made Minneapolis more prosperous and livable than most American cities during the economic downturns of the past few decades. Hence, fiscal conservatives also have an appreciation for the man.

Swan’s latest book is a call to action by the GLBT community titled Gay, Lesbian, Bisexual and Transgender Civil Rights: A Public Policy Agenda for Uniting a Divided America. It contains numerous essays by different notable minds about what’s next, now that marriage equality is becoming a reality. I asked Dr. Swan some questions that address some, though far from all, of the overview his book offers.

JT: What do you mean by “empowered” and “disempowered” states?

WS: This book  is about the current Civil Rights struggle that is going on in the United States, where 17 “empowered” states have many if not all GLBT civil rights up to and including marriage, while the remaining 33 “disempowered states” have few if any of these rights. These “disempowered” states are geographically grouped into rust belt states, southern states, plains states and mountain states. The disempowered states typically don’t have protections for employment, education, prevention of bullying, domestic partnerships or marriages; and they have differing socioeconomic characteristics from the “empowered” states.

The lack of the protections in these states is guaranteed by an alliance of powerful national organizations which raise tens of millions of dollars each time these rights are brought to a vote of the people. The book documents a whole wide variety of professional fields where inequality has been the case—K-12 and higher education, senior issues , health, criminal justice, homelessness, family formation, among many others. It discusses recent victories for marriage equality in Minnesota and other states and contrasts them with defeats in North Carolina and suggests some ways by which the “disempowered” states may move toward equality. Ensuring equal marital rights is only the beginning, and not the end, of efforts to ensure equality for GLBT people.

JT: There is a view that a minority of gay men are in marital relationships while the majority are not. What is the economic concern about this? And what about the many gay men who choose to be single or the unknown amount who are polyamorous?

WS: Data has been collected in the U.S. Census to tell us how many gay and lesbian couples there are in the United States; 646,464 couples or 1,292,928 individuals. Of those, perhaps 131,729 of the couples are “married”.  However, no U.S. Census data has ever been collected to really tell us how many single GLBT people there are in the country because the question is not asked in the census. As a result, we cannot for sure tell if there are more married than single gay men; or more married lesbians than there are single lesbians; or how many bisexuals or transgender people there really are. The U.S. Census data is used to allocate over $400 billion to groups needing assistance, and as a result GLBT singles get nothing. This needs to be changed.

JT: There is a view that the vast majority of older GLBT people are not and will not be a part of the marriage boom despite the fact that they were the bedrock over the decades that laid the foundation for marriage equality to succeed. But there’s a real, present, and ongoing danger of our seniors being put in precarious situations in nursing homes and in the sheer ability to survive financially.

WS: Having been to a number of the recent training sessions about rules and regulations governing marriage, I was struck by how most of the hundreds of people in attendance were actually older gay and lesbian couples, who clearly are interested in legally protecting their valued relationships. That fact aside, however, the book does have an excellent chapter by Professors Jean Quam and K. Abel Knochel discussing the concerns of GLBT seniors regarding their anxiety about having to go back into the closet when they enter assisted care and nursing homes. Luckily, in Minnesota we have the work of Training to Serve which has trained and assessed many nursing home as well as assisted care home staff in terms of their ability to be culturally competent in dealing with GLBT senior issues: Readers can look at the website http://www.trainingtoserve.org/ to obtain this list.  Our state is a model for many parts of the United States where this capability does not currently exist.

JT: What are some of the issues regarding prisons and why should we be concerned about that?

WS: The 2003 Prison Rape Prevention Act was designed to ensure that GLBT people (and others) are protected against being singled out for their identity and then sexually assaulted in correctional institutions. A side-effect of this positive effort is that we now have no idea how many GLBT people there are who are in prison. Like many other issues relating to GLBT people (e.g. adult and senior homelessness), without data we are helpless to identify the kinds of problems that there are and deal with them.

JT: Undocumented transgender persons lack options and the results can be rather terrifying.

WS: The treatment of undocumented GLBT people is unacceptable. And the treatment of transgender people and single undocumented people is particularly egregious. Research reveals that if people are transgender, they stay in “preventive detention” (i.e. solitary confinement”) to “protect them” from other prisoners, for an average of eight months, instead of the normal two months for heterosexuals.

If they are living in a coupled relationship, they can now apply for citizenship. If they are single, they go to the detention camps.

JT: We hear lots of feel-good stories about young people of today accepting queerness, homosexuality, and the GLBT community. But there are serious concerns about GLBT youth both at schools as well as those who have been thrown onto the streets.

WS: At a Rainbow Health Initiative program that I attended on May 17, 2014, the presentation included the 2013 Minnesota Student Survey figures on suicidal ideation and suicide attempts by young people in Minnesota. They were as follows:

The issue of GLBT homelessness is a major issue of course, with figures ranging from 20%-40% of the total youth homeless population being young GLBT people. The other, (totally unrecognized) issue is that a recent San Francisco study, which needs to be replicated in other cities, documented in the December 2, 2013 edition of the New York Times indicates that 29% of the adult homeless population in that city are adult and senior GLBT people. Thus the GLBT percentage of the homeless population throughout our entire life cycle remains about the same.

JT: What are your thoughts on the horrors in Nigeria, Brunei, Russia, Malaysia, and Uganda? It seems that we have a responsibility to sound the alarm on that.

WS: I could not agree more. The efforts of right-wing religious zealots have been unsuccessful in the United States. Therefore, in the same way that the unsuccessful efforts of cigarette manufacturers have been exported to Asia and Africa, the ideology of anti-GLBT bigots has been exported to Nigeria, Russia, Malaysia, Brunei, and Uganda, among other countries. We need to support the efforts of the United States and the United Nations to call to legal account in the International Court of Justice those who support these egregious violations of the U.N. Declaration of Human Rights. Why are they not being prosecuted?

JT: What issues concern you about health care?

WS: Clearly the issues of health care disparities between GLBT people and the remainder of the population are of great importance, and have been carefully identified by Rainbow Health Initiative in the “Voices of Health: A Survey of LGBTQ Health in Minnesota” as well as the Hennepin County 2010 SHAPE study.

We have thoroughly documented the health disparities for GLBT people in regard to alcohol. 45.85% of GLBTQ people report binge drinking in the last 30 days vs. 21.9% of the remainder of the population, and cigarettes: 29.9% of GLBT community use vs. 16.1% of the remainder of the population. We know that corporations have targeted our community, with the result that our uses of both are extremely high. But where is our inventory of drug abuse in our community? And how do we plan to respond to the use of prescription drugs, meth, and other substances in our community? People are suffering because of this, and we do not have a community-based plan to address this.

JT: Please express anything else you think is important that your book looks at.

WS: The book talks about so many issues, and includes so many Minnesota writers, that it is hard to sort them all out for you. Senator Scott Dibble writes the Foreword for the book; there is an extensive discussion of the organizations that carry on the battle for and against GLBT human rights; there is a comparison of Minnesota by Minnesota activist Beth Bibus and North Carolina in the battle about marriage amendments; there is a chapter about GLBT elected officials by Jane Laine,  including profiles about Rep. Karen Clark and Rep. Susan Allen. There is an excellent chapter by Sam McClure of National Gay and Lesbian Chamber of Commerce and formerly Minneapolis’ Quorum Executive Director about workplace diversity. There is a discussion of GLBT educational support in K-12 and higher education by Michael Grewe at Augsburg.

There are two chapters about transgender issues by Minneapolis council aide Andrea Jenkins and Minneapolitan Denise Burke; a full chapter on Bisexual issues by Victor Raymond from Madison who often visits the Twin Cities; a chapter on Health issues by Sid Guthrie from Regions Hospital in St. Paul; the seniors chapter by University of Minnesota Dean Jean Quam and Professor K. Abel Knochel; the chapter about Homelessness by Stephanie Kimble; a chapter on GLBT governmental infrastructure by Professor Kristen Norman-Major at Hamline University in St. Paul ; and the excellent work on Criminal Justice issues by Dallas Drake from the Minneapolis-based Center for Homicide Research.

JT: How can folks get your book when it’s published ?