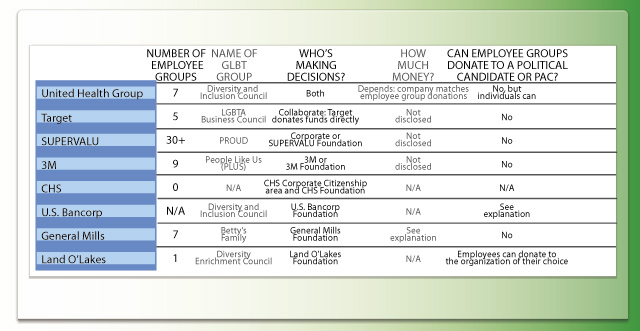 To create a more rounded view of corporate giving, Lavender asked the top Fortune 500 companies in Minnesota about their giving policies. Information has been complied into a graph as well as the following explanations.

UnitedHealth Group works to help people lead healthy lives, according to Kate Rubin, the President of the UnitedHealth Foundation. “Our community helps us select the places where we want to be engaged and really focused,” Rubin said. A group within the company’s Diversity and Inclusion Council, although not a formal GLBT group, helps UnitedHealth advance equality and decide which events and organizations are consistent with their goals to promote wellness locally, nationwide, and around the world. The company has contributed to Philanthrofund (PFund), the National GLBT Task Force, Twin Cities Human Rights Campaign, and more.

Target has five business councils (African American, Asian, LGBTA, Hispanic and Women’s), which allow employees to give their perspective on business decisions in community engagement, according to Target spokesperson Molly Snyder. The business councils make recommendations to Target’s Community Relations team, which ultimately settles on the donations that Target funds. Although the business councils do not make political donations, Target can give money for a political purpose. Target has contributed to Twin Cities Pride, and has sponsored the 2011 Red Ribbon Ride.

SUPERVALU, a grocery retailer, gives money through the corporation itself, as well as the SUPERVALU Foundation, in order to promote their three focus areas: hunger relief, nutrition, and environmental stewardship, according to SUPERVALU spokesperson Mike Siemienas. Associates are able to get their word in through over 30 Business Resource Groups, which collaborate with SUPERVALU to help foster an inclusive corporate environment. PROUD is the local GLBT group, one of four countrywide, which has worked with the Aliveness Project and has been involved in community activities such as food and clothing drives. Supervalu has been given the top rating of 100 percent on the Human Rights Campaign Foundation’s annual Corporate Equality Index (which measures U.S. employers treatment of GLBT employees, consumers and investors) for the past four years.

3M, which was founded over a hundred years ago in Two Harbors, Minnesota, is a science-based company whose technology and products are distributed worldwide. In 2010, the 3M Foundation gave thousands of dollars in grants to United Way, Habitat for Humanity, theatres and the arts around the Twin Cities (such as the Penumbra Theatre, the Ordway, the Minnesota Orchestral Association and CLIMB Theatre just to name a few) and more. Employee groups can make recommendations to 3M corporate and the 3M Foundation to determine where the money goes, explained 3M spokesperson Jacqueline Berry.

CHS has a vision “to be a globally integrated energy, grains and foods system innovatively linking producers with consumers,” according to their website. CHS, Inc. makes donations through their CHS Corporate Citizenship area and the CHS Foundation. Most of the community giving is made in hope of building “vibrant rural communities” and are, in general, “agricultural or cooperative in nature,” according to Lani Jordan, CHS director of corporate communications. CHS has given funding to 4-H, FFA, and rural leadership development programs, Jordan mentioned.

General Mills and the General Mills Foundation give millions to communities nationwide. In 2011, $25 million of the $120 million total went to international grants focused on issues related to hunger and nutritional wellness, according to General Mills spokesperson Maerenn Jepson. Betty’s Family, the company’s employee network for gay, lesbian, bisexual and transgender employees and their friends and allies, helps General Mills create a “safe, open and productive work environment for [GLBT] employees.” Jepson stated that General Mills did not give money to any independent political expenditure committees in 2010 or 2011 and doesn’t plan to do so.

Land O’Lakes does not have a group to represent GLBT employees exclusively, but has a Diversity Enrichment Council, which addresses all dimensions of diversity and promotes equality in the workplace. This council seems to serve GLBT employees well, as Land O’Lakes received a perfect score in the Corporate Equality Index in 2011, according to Land O’Lakes. Land O’Lakes has one employee group underway, called the Women’s Leadership Network, but all giving is coordinated through the Land O’Lakes Foundation. Some Land O’Lakes employees have been involved in United Way’s Arise Project, which aids homeless GLBT youth. In addition, Land O’Lakes was a corporate sponsor of the 11th Annual “Songs from the Heart” gala, which benefited the Twin Cities Gay Men’s Chorus and Avenues for the Homeless Youth event.