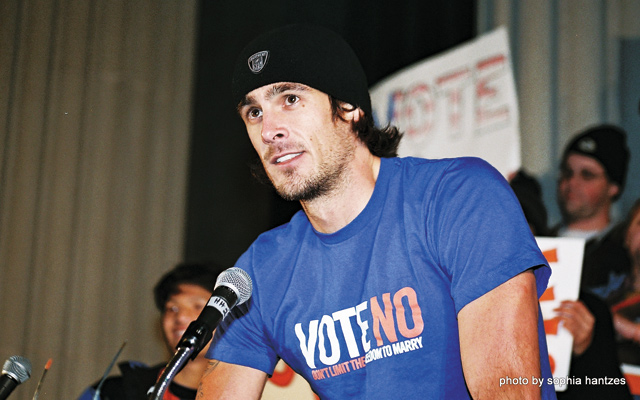 The morning of Monday, May 6, those of us who were following the news knew that Vikings punter, Chris Kluwe, had a meeting with management. The Vikings had used their fifth round draft pick for Jeff Locke, a fresh punter from UCLA, which started the speculations that Kluwe would be cut, potentially because of his vocal advocacy for GLBT equality. The bad news was delivered by way of Twitter in true Kluwe style, with “So long Minnesota, and thanks for all the fish!” I shared the news on Lavender’s Facebook wall, took a while to think about it, and then sent him an email asking for an interview, but feeling like an ambulance-chaser. What did I want? Not a scoop; I was certain that there’d be nothing to say about whether or not his departure was due to standing up for the community. No, I wanted more from him. I wanted to eke out more word morsels, more thoughts, more philosophies. I wanted more of our Empathetic Punter.

Just before midnight that same day, I got the response from him giving me a time to call the next day–and an apology for not getting back to me earlier, he’d been “kind of swamped” that day. That guy. Always a class act, whether spewing a verbal barrage toward an intolerant legislator or delivering an impassioned speech as to why the anti-marriage amendment needed to be defeated last November.

Now, as the state’s legislature is voting on the freedom to marry, the irony is that we’re losing our most visible and potent champion. So, we send him off with great thanks, hopefully with one last win for Minnesota.

How do you feel your performance has been for the Vikings?

I think it’s been really good. I’m the top ranked punter in Vikings history. I have pretty much every team record, I’ve been very consistent, and very good at what I’ve done over the years.

What would have happened after this last year of your contract? Would you have been looking to stay with the Vikings or go elsewhere?

Yes, I would have been looking to negotiate a contract extension so I could continue on with the team if they wanted to keep me. If they didn’t want to keep me, I would become a free agent–free to work with any other team–but I would’ve preferred to stay with Minnesota. I’ve gotten to know a lot of people in the state, made friends.

I was reading that you thought you have another four to five years left on your punting leg.

What went through your mind when you heard that the Vikings drafted Jeff Locke?

Well, I thought, “There goes my job.” It’s a pretty clear sign when a team drafts a punter in the fifth round that that’s who they’re going to go with in the next year. At that point it was, “Okay, I need to be ready to play for another team. It’s clear I’m not going to be with the Vikings any longer.”

Right away I saw a petition and people starting Facebook campaigns to Keep Kluwe. Do you think that would’ve had any effect on the Vikings? What do you think about that?

[Laughs.] Uh…probably not, unless the state went into armed revolt. The coaches and managers are generally not known for caving in to fan demands. They’re running a business and if they feel they want to go in a different direction, that’s what they’re going to do.

In terms of the Vikings and whether or not this was a good move for them both sports- and PR-wise, how would you assess this situation if you were an outsider looking in?

That’s a tough one. I would look at my stats and how I punted over the years, I’d look at what I’ve been able to accomplish from a football perspective and I’d ask myself if that was a guy I would’ve wanted to remain on my team. And, you know, that’s something that each person is going to answer differently.

You were an outspoken advocate for the GLBT community this past year and there’s plenty of talk as to whether or not cutting you from the Vikings was a punitive or preventative move. Do you have an opinion as to the role your advocacy played?

I’m not sure. I don’t know because I’m not in the meetings with the coaches and management when they’re making those decisions. I don’t know what’s said, I don’t know what rationale is used, the only thing I can do is go out and keep punting well and hopefully trust that my body of work will let other teams know what I’m capable of.

In thinking about your body of work and the personality that you’ve become in both Minnesota and the nation, do you think that had a more positive or negative impact on the Vikings?

I’d like to think it had a positive impact on the Vikings. Society, as a whole, is moving more toward equality and I’ve gotten messages from people who’ve told me that they’re Vikings fans because of what I said or what I’ve done. So, I think I’ve been a net positive.

The community clearly attributes a leadership role to you in the fight for equality–do you see and acknowledge that you, personally, affected change?

I hope I did–I felt that that was the right thing to do. I’m glad that we were able to defeat the amendment and I hope that we’re able to pass the same-sex marriage bills, too. That’s something that I hope Minnesota, as a state, realizes–that people should be free to live their own lives, you shouldn’t have to live in fear of oppression by someone else.

I was thinking about the 29 states that don’t have employment laws protecting GLBT people against discrimination as I was thinking of your situation. I’m not saying that you were cut because of your advocacy for the GLBT community or that it was a discriminatory act by the Vikings, but the notion isn’t so far-fetched considering that it would actually be legal to do so in 29 other states if you were gay. What are your thoughts about this?

That’s something I’ve brought up at quite a few of the schools that I’ve spoken at–that the mere fact of who you are should not be grounds for you being terminated from your job. That’s just wrong no matter which way you look at it. And I think that it’s something, as a society, we need to address. It’s telling someone that no matter how good you are at your job–how much time you put in, how beneficial you are–if you are a member of the LGBTQ community, then we will get rid of you simply because we don’t like you, and that is discrimination.

We know you’re scheduled to be in town for the OUT Twin Cities Film Festival and as Grand Marshal of the Twin Cities Pride Parade. We’d love to see you and express our appreciation. Can we expect to see you even with the all the changes coming up for you?

Yes, they’re definitely still in my plans. That’s one of the things I’m going to tell whichever team I end up with, that I have prior commitments in Minnesota that I’m going to keep because they’re important.

Speaking of Pride, that’s about when your new book is coming out–it’s coming out June 25th, right before Pride, right?

[Laughs.] Yes, which was completely coincidental! When I was asked to be Grand Marshal, I was like, “Wait a minute…I know I have something going on…oh, that’s right.”

So, tell us about Beautifully Unique Sparkleponies. I love the rest of the title: On Myths, Morons, Free Speech, Football, and Assorted Absurdities.

Essentially, the book is an assortment of short stories and essays and it deals with the idea of rational empathy, the idea that societies that do not practice empathy–that do not promote equality–end up collapsing, either from conflicts that they provoke from within or conflicts that they seek out. You can look at the historical timeline and every single civilization has failed the test of time. There has been no civilization that has lasted more than a couple thousand years. If we want to survive as a human species, then we have to realize that if we don’t work together, instead of against each other, there will come a point when we will hit another ice age, we will hit another meteor event and it will be lights out. It’s a certainty that that will happen and so we need to be working with each other instead of trying to splinter each other apart.

Throughout my time here and being alive, society seems to go through these cycles; they gradually start becoming more insular and start looking at other countries and nations as the “other” and they provoke conflict or discord. Or, sometimes they’re splintering from within because they view people in their own society as the “other.” We’re seeing that now with the problems that we have with LGBTQ rights in this country–as well as racism, there’s still plenty of racism. The fact that there’s still plenty of conflict in the world between countries because of religious beliefs or political beliefs, it’s something that we have to address.

Do you think that there’s any coming back from this or do you think we’ll be falling off the cliff together?

Unless we learn how to practice empathy as a majority of a society, then we will go off the cliff. There is no other outcome. Historically, there has been no other outcome. It’s something that unless you can understand why an action should not be taken by putting yourself in the other person’s shoes, then inevitably someone is going to take that action. And that will trigger a whole series of other actions that end with people standing around, staring at the rubble, wondering “What happened?”

How do people become more empathetic?

Whenever you do something, put yourself in the other person’s shoes. Abide by the Golden Rule: treat others how you would like to be treated. If you can’t put yourself in someone else’s shoes, you need to learn how to do that because any equation that involves the other person not liking what would happen is not equality, is not tolerant.

If you have an empathic society, it realizes that equality is necessary for everyone.

For my final question, is there anything you’d like to say to the Lavender community?

Thank you, Chris. You will be sorely missed.

We asked our Facebook followers if they had anything they wanted to say to Chris Kluwe, here are some of the responses:

Goodbye Chris Kluwe, you were the first Viking I could name and will also be the last. –Laurel Richmond

I love when people stand up for what they believe in. Its been so refreshing to see a person in sports support equal rights. We need more people like him, he’s certainly fearless & will always be admired in my book. Good luck Chris! You’re doing a great thing. Remember that. –Melissa A Kugler

Thank you for using your “veteran power” to speak out on head injuries in the NFL and marriage equity. Last season wasn’t your best on the field, so I’ll assume this move was, as it should be, purely based on the needs of the team on the field. The proof of the reason will be in whether the Viking’s front office encourages other current players to speak out. –Diane Raff

Thank you for your time with the Vikings, we wouldn’t be where we are without your solid record but most importantly, thank you for being a stand up guy. You will be missed! –Tina Coreen

Good luck with your new team you will be missed by me…keep up the good fight for human rights!!! –Tina ‘Green’ LaCasse