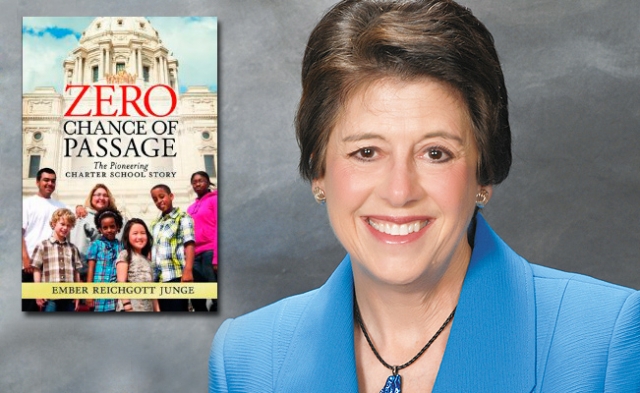 Define the phrase, “chartered school.” You’re unsure? You have no idea?

According to Ember Reichgott Junge who spoke with Lavender recently about her new book, Zero Chance of Passage: The Pioneering Charter School Story, “A chartered school is an independent public school created by teachers and parents to provide new and innovative opportunities for learning that meet the needs of families and the community.”

The former Minnesota State Senator wrote her book to celebrate the twentieth anniversary of chartered schools in Minnesota—the first in the nation—and to gather the heretofore-fragmented history into a single, coherent narrative. Others, including then governor Rudy Perpich, Ray Budde, Ted Kolderie, and Al Shanker, helped pave the way for the landmark legislation, but Reichgott (she later married Michael Junge) authored the landmark legislation that passed in 1991, paving the way for Minnesota’s and the nation’s first charter schools.

A major motive for writing Zero, Reichgott Junge explained, was “the need to dispel myths about the origins of chartering.” To this end, she interviewed fifteen original supporters and opponents in 2011, whose diverse views complete this complex story. To her surprise, she discovered that “no one knew the whole story.” The book succeeds admirably in giving the reader both a comprehensive overview and a clear understanding of what chartered schools are—and are not.

Chartered schools are public schools, are open to all students, charge no tuition, and are non-sectarian and non-elitist. They are not to be confused with private schools, and they are not subsidized with school vouchers. “’Chartering’ is a verb,” she stresses, “and has to do with a process, not the real estate of a school building. Hundreds of ways to learn can be delivered in chartered schools.”

Reichgott Junge emphasized that the chartered school legislation was a bipartisan effort to revive public school education that arose “from outside the traditional political system.”

Accountability and performance are crucial to chartering. A school is chartered for an agreed period of time and is accountable for achieving declared aims within that period. If the school does not succeed, she explained, it can and will be closed.

Reichgott Junge shared a number of engaging personal lessons learned, revelations that make the book more intimate and readable. One of the most important was, “Compromise is not defeat.” This was a difficult pill to swallow, she confessed, when the bill was passed in what she felt was a greatly diminished state. Later she realized that even so, it was, in fact, the kernel of today’s successful chartered schools. “Sometimes we have to celebrate the small victories,” she concluded.

The initial legislation mandated a cap of only eight schools, all having to be authorized by the local school district. Today there are 148 chartered schools in Minnesota, authorized in a number of different ways, while nationwide some two million students attend 5,600 chartered schools.

There is not space here to relate all the Byzantine intricacies of the creation of chartered schools, but Reichgott Junge makes the story compelling by weaving the reams of historical detail together with her own and the interviewees’ personal experiences, seen in the light of reflected time.

Reichgott Junge’s thoroughly researched and finely-detailed book can be read not only as a history of the struggle to create and pass charter school legislation, but also as a memoir, and, more broadly, a “handbook of lessons learned for achieving change that is difficult.”

For more information on Zero Chance of Passage: The Pioneering Charter School Story and on chartered schools visit www.ZeroChanceOfPassage.com.