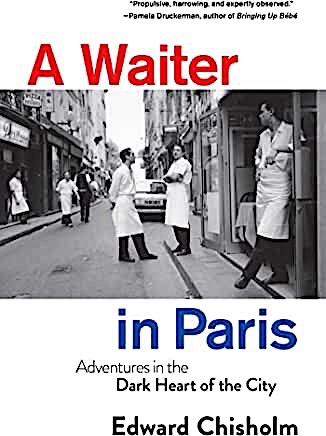 A Waiter in Paris: Adventures in the Dark Heart of the City
Edward Chisholm
Pegasus Books
$28.95

After graduating from London’s School of Oriental and African Studies, Chisholm moved to Paris, living cheap à la Orwell’s Down and Out in Paris and London, before a writing career. Initially a job as a runner at an outwardly tony bistro. Not a job, the promise of a job, as illusory as the promised paycheck. More illusory is Chisholm’s knowledge of the language: ‘––––––––?’ “He points to dozen gray boxes of cutlery…” ‘–––– cleaning. No soap–––’ “I guess he wants the cutlery cleaned.” French improves, but not the bistro’s Augean conditions. His co-workers are a disparate crew with a sliding scales of scruples. Slowly Chisholm becomes a proficient runner, edges into proto-friendships, becoming, finally, an actual Waiter. Fascinating, keenly observed, best consumed postprandially.

The Evening Crowd at Kirmser’s A Gay Life in the 1940s
Ricardo J. Brown
University of Minnesota Press
$16.95

Not new, but timely. A specific place and time in gay Minnesota history, and by extension of most of the country following WWII in 1945-46, Brown experienced the time, recorded at a distance for his 2001 memoir. Kirmser’s, 382 Wabasha Street, a straight workingman’s bar by day, accepted a queer clientele by night. Young Brown joined the Navy, was dismissed at eighteen as “undesirable” after admitting to being “homosexual.” Closeted at work, at home, to anyone unknown, Kirmser’s was a haven to Brown and the men and women who slipped furtively inside for company. Brown, later a journalist has an eye for irony, for humor, for the tragedy of many of the lives he chronicles. After petitioning, Brown was granted honorable discharge–thirty-six years later.

All families have secrets, some more than others. And, appearances can be deceiving. Jessi Hemple’s family would have played outwardly as solidly middle-class; Dad, a lawyer, Mom, a classic stay-at-home variety, parents of three lovely daughters. Well, two lovely daughters and… and here’s where the tightly-knit unravels. Dad was gay; Mom, consumed by a teen encounter with a serial killer, shattered. One sister–the author–lesbian, the other bi, brother Evan trans and pregnant. The book is Jessi’s “Project. She interviewed them all over time and they worked to reconcile. Coming out was just the beginning. It’s exhausting but true; journalist Hemple chronicled Evans story in a 2016 TIME. Each discovered, as have many others, that to know another one has first to know oneself.

How to adapt the diary of Anne Frank, the teen known world-wide seventy-seven years after her death? How compress her iconic text? As adapter Folman noted, a “complete” version would require some 3,500 pages. What Folman and Polonsky did create over five years is no less than magical. Chunks of text have remained whole where necessary, some of Anne’s thoughts are rendered in imaginary flights, others compressed as in the three-panel strip of Anne envisioning her own unruly self, compared to “perfect” sister Margot–succinct; hilarious. Polonsky’s illustrations perfectly convey Anne’s sly, witty, sometimes acerbic temperament, his coloring reflecting the times. Any directly quoted text used is from the definitive edition of the Diary. A book for readers of all ages to read and reread.