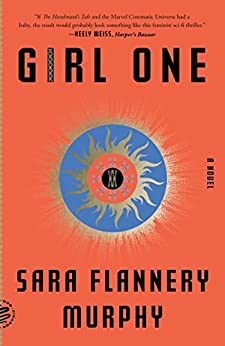 Josephine Morrow was the first Miracle Baby–“Girl One”–conceived in the mind of Joseph Bellinger and brought to term without the taint of male DNA–the first successful instance of human parthenogenesis. Josephine, her mother, and eight successive mother-daughter pairs lived sequestered on Bellanger’s Vermont Homestead–until the fire. That was 1972; now, in 1994, Josephine’s mother has disappeared, their post- Homestead dwelling a charred and empty ruin. Josephine hits the road, seeking her scattered, reclusive sisters, discovering hidden powers among them, piecing together the truth about their origins, their childhoods, and what actually happened to “father” Bellanger, reported to have died in the Homestead conflagration. Have Josephine’s own scientific attempts to further his work been an homage, or a misguided attempt emulate a madman?

Even the strong may be brought low by grief. Postal Inspector MC McCall falls back on the demon vodka following the murder of her partner Barb scant months earlier. Now assigned to a widespread and dangerous opioid narcotics investigation, MC’s obsession with tracking down Barb’s murderer–despite warnings from her higher-ups–overrides reason, putting at risk her years of dedicated service. From Barb to the bottle and back, MC perseveres, finding threads that begin to weave into a tighter, increasingly lethal whole. MC realizes she’s flawed, yet it is her professionalism and sensitivity to shadings and nuances that ignite the explosive ending to the case. Minnesotan Kerr retired from the postal service after more than thirty-eight years of Federal service; she knows whereof she writes.

Originally published in 2013 and now a cult classic rereleased by FSG Originals with a new Afterword by the author, Nevada follows the roadtrip of thirtyish, disaffected trans woman Maria Grifiths. After a breakup with girlfriend Steph, she “borrows” Steph’s car, leaves her bookshop job and New York City altogether, heads west to end up in Star City, Nevada. There, in a Wal-Mart, she meets James, a conflicted youth–Trans-yes? Trans-no?–who reminds her of her younger self. Will she help or harm him? Can she do either? Their desultory coming together then apart, moths tattering their wings against a dimming light, is electric, yet inconclusive, as the author says in the dedication, “…not a happy book.” In its very non-ness lies its solace.

A second prequel in the Detective Kubu Mysteries, Covenant is more than a thriller, offering insight into how large (Kubu means “hippopotamus”), shy, intelligent David Bengu was shaped through circumstance and willpower into the renowned detective of the later books. Here he’s sent to assist pathologist Ian McGregor concerning an aged Bushman skeleton unearthed in the construction of a pipeline in the northern Okavango Delta. But more skeletons are revealed, and the case becomes entangled in accusations of local corruption, a wrathful river spirit, and worldwide outrage at the Bushman massacre. A Bushman is jailed for local killings. Kubu, despite personal insecurities concerning love and social skills, sets his keen mind to work, absorbs, solves – gains confidence in handling police procedure, single-malt whiskey, and love.