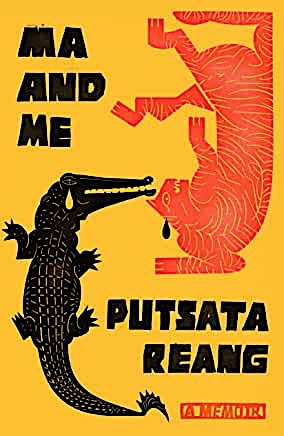 Ma and Me: A Memoir
Putsata Reang?
Farrar Straus and Giroux
$28

Infant Putsate Reang was carried by her mother (Ma) through war-riven Cambodia, and twenty-three harrowing days aboard ship, Ma refusing to throw her (presumed) dead infant overboard until finally, American medical staff in the Philippines. Debt was incurred on both sides, young Putasa trying to please the Ma who had saved her life, Ma intent on creating the perfect Khmer daughter–dress, deportment, a Khmer husband. Impossible for either to achieve in America, socially, culturally, sexually; Putsate did not seek a husband of any sort. Reang unravels the painful coils of generational trauma and the impossible demands of cultural and family duty that almost–but not quite–crush the bedrock of love. An exhausting yet rewarding read; what must it have been like to live?

Furman and Mardell present 92 glimpses into gay life and interaction in “Domestic,” “Communal” and “Public” sections. Each individually-authored essay is relatively short, but the enticing mix of photographs, floor plans, art, historical data or current interviews, open avenues to further exploration and emphasize that LGBTQIA+ individuals have been among us–and will continue to be–for a long, long time. Dragon Men in Tokyo, Homomonument in Amsterdam, Category is Books, Glasgow, London’s Cave of Harmony of the 1910s-1920s, Plas Newydd, Llangollen, Wales, 18th Century cottage of the be-suited Lady Eleanor Butler and Miss Ponsonby, Light Coffin–Dracula’s Den, Chiba, Japan, a unique, windowless abode designed by Osamu Ishiyama for two male clients are just a few entries. A volume to keep close and savor.

Last Days of the Dinosaurs: An Asteroid, Extinction, and the Beginning of Our World
Riley Black
St. Martin’s Press
$28.9

Researched yet speculative, a charming travel through long-time (66-million years) by the author of Skeleton Keys and My Beloved Brontosaurus. The day a giant asteroid hit  Yucatán’s Chicxulub Peninsula may have been Earth’s worst day ever, but the tremendous loss of life opened the evolutionary door for Homo Sapiens. Starting earlier that day, Riley, from Hell Creek, Montana, enters “Before Impact” and on to “Impact” and its immediate lethal effects, then outward; “The First Day,” “The First Month,” “One Year After Impact,” “One Hundred Years…” “One Hundred Thousand …,” “One Million Years After Impact.” Who survived, and why is explored through illustrated creatures. We’ll never know the whole story, but can now picture who burrowed, who breathed shallowest, ate less, dozed longer, biding their time.

Part of Addison’s Goblin Emperor world, The Grief of Stones is second in her Cemeteries of Amalo tales featuring The Witness for the Dead protagonist, Thara Celehar. Sent to serve as a Witness for the Dead, elven detective Celehar is taken aback to discover that he’s been sent an apprentice, the widow Velhiro Thomasaran, and commanded to instruct her. The plot complicates when the Marquess Ulzhavel, suspecting his wife’s murder, requests Celehar inquire into her death. Further complications arise when Celehar and Velhiro discover a connection between the wife and a murdered student at a foundling school, the situation now becomes rife with scandal. The heart of Addison’s stories lie in the reality and believability of her characters; if you haven’t read Witness yet, do.