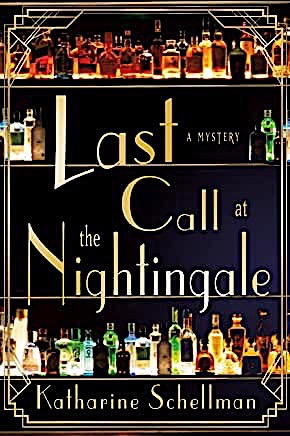 Schellman’s first in a Jazz age mystery series draws the reader into the depths of New York City’s Nightingale, a 1924 speakeasy, overseen by feared owner, Honor, who keeps an eye on young Vivian Kelly. Kelly drudges by day in a dress shop, shares tenement rooms with sister, but slips out to visit a friend who works at the Nightingale, snagging a dance or two, sipping free champagne. Then she discovers a body in Nightingale’s alley, is caught up in a police raid, and her life changes forever. Schellman has thoroughly researched the people and the mores of the period, and skillfully uses characters of different sexes and races that the reader slowly determines. Subtle, blatant, the book begs the question: “When’s the next one?”

Anna (Mama), child of an impoverished family, was stricken by polio, separated and kept for years in hospital undergoing grueling treatments and excruciating operations. Told she’d never hold a job, never marry, never bear children, she did all three–at great cost to herself. This book, written by the middle son of the three she bore, is a memoir of Black’s own fears growing up gay in a Mormon household ruled by a violent father, but is most stunningly an homage to his Mama. Black, too, persevered, retaining the strengths of his religious upbringing, fighting for gay rights and writing and producing the Oscar-winning Milk biopic. Filled with emotion and passion but not bathos, Black lays before the reader the shining power of family love.

Diamond-in-the-rough barkeep/detective, Shadwell Rafferty, 84, may have just determined the murderer of prolific social blackmailer Daniel St. Aubin. Back in his St. Paul hotel rooms, Rafferty has just finished typing up his notes when he’s stabbed in the back, the notes stolen. Finding his corpse, best friend George Washington Thomas alerts Holmes and Watson, travelling in the States on a lecture tour. They arrive and begin to suss out the five main suspects who include a gay poet, a Monsignor, a chief of detectives, a Mayor, and his aide/fixer. Even St. Aubin’s mother, Muriel, approaches Holmes requesting him to find the murderer, though she’s oddly reticent to actually assist. Plenty of greedy sharks from which to choose, but Rafferty himself points a final, cold finger.

Proving not every gay is an icon to revere or imitate, authors Lemmy and Miller present some exemplary dark sheep. “Homosexuality” as we know it only appeared in the 19th century, leaving plenty of earlier fodder to contemplate. Oscar Wilde was a pivotal point, falling from the heights to the depths–and death–within a decade, but he opened eyes, if not understanding or acceptance. The authors cruise the wilder and darker side of queer history, starting in 76 AD with Hadrian (Publius Aelius), cousin of future emperor, Trajan, adding profiles on Frederick the Great, Lawrence of Arabia, Margaret Mead, J. Edgar and Roy Cohen, and Yukio Mishma–fourteen eye-opening chapters in all. Well- researched, humorous, they illustrate how the interpretation of homosexuality itself influenced history.