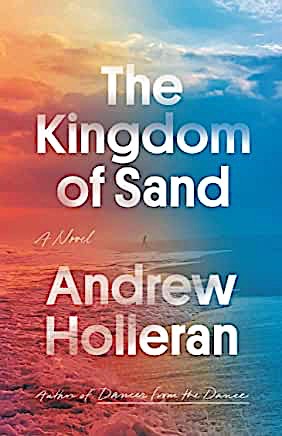 In 1978, his Dancer from the Dance established Andrew Holleran (pseudonym of Eric Garber) in the forefront of gay literature. Lust, loneliness, and ageing are the dark themes coursing through Kingdom of Sand, Holleran’s first novel in sixteen years. It’s 2020, and the unnamed protagonist has painted himself into a damp, sandy corner of rural Florida. He’d moved to this area, to his parents’ house to care for them in their old age, and after their passing, stayed. His one older friend, Earl, with whom he watches classic movies, is now dying. Loath to make any changes, in life or in his parents’ crumbling home, he waits, broods. Assuming his undesirability, it becomes his reality. Poignant, but avoidable? A kingdom erected on sand? Can one choose?

Creator of the Eisner Award-winning My Brother’s Husband, Gengoroh Tagami’s Our Colors is an equally moving coming out/coming of age animé story unfolding in 21 episodes. Sixteen-year-old Sora Idota is artistic–and gay. He’s attracted to a class athlete, Kenta Yoshioka whom he dares not approach, and enjoys the supportive friendship of (girl) classmate Nao. In his artwork Sora relates colors to emotions, but lives at loose ends until by chance he happens on a mysterious café, and becomes friends with the gay, middle-aged owner, Mr. Amamiya. Seeing the boy’s talent, Amamiya hires him to paint a mural in the café, a project interrupted by a woman from Amamiya’s past. There is closure, and the knowledge that “Nobody comes out just once.” Emotional and timely.

A handsome volume of essays by queer icons about those who preceded them, and including two films and a TV show. The twenty-four vignettes offer an insider’s view on their subject and a peek into the insider’s personality as well, each essay is uniquely illustrated by a queer/ally artist, each, like the accompanying essay, revealing. There’s Matthew Todd on Harvey Fierstein, Amelia Abraham on Susan Sontag, Paul Mendez on James Baldwin, Mark Moore on Quentin Crisp, Freddy McConnell on David Bowie, Courtney Act on Priscilla, Queen of the Desert, and Tan France on Queer Eye. Even the endpapers are fun and instructive, responding to taunts of “unnatural” to GLBTQIA folk by illustrating the gender-frolicsome hyenas, sea horses, clownfish, penguins that add their differences to ours.

This Body I Wore: A Memoir
Dina Goetsch
FSG
$28

Goetsch’s life veers from humorous to horrifying with many stops in-between. Transitioning is never an easy undertaking, especially when one has no clear idea of what’s wrong or how to right it. Or what “it” even is. Goetsch, an essayist and poet (published in The New Yorker, no easy feat in itself), talented to a high degree yet undergoing severe depression, wanting to connect, yet continually drawing back, breaking off from possible partners (some, quite understandably); no family to fall back on–a bullying brother, loveless, abusive mother (“you were a mistake”) a distant father, life remained loveless, steeped in loneliness. First cross-dressing, then relationships with women dressed as a man, after immersion in Buddhism and poetry, she began transitioning at 50. Honest. Raw. Instructive.