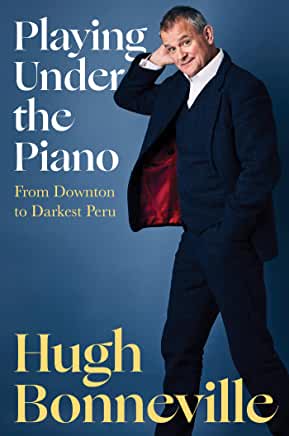 Playing Under the Piano: From Downton to Darkest Peru
Hugh Bonneville
Other Press
$28.99

A treat for those who know the author only through the six seasons of “Downton Abbey” to hear Robert Crawley, aka Hugh Bonneville, fill in some biographical gaps, from his debut as Third Shepherd in his school nativity play to treading the boards with the likes of Judi Dench and Kenneth Branagh. Some idols have feet of clay, but Bonneville treads lightly through his narratives, witty, sly, drawing the reader in with every word. Running lines with Dame Maggie Smith for Lady Violet’s death scene in her final “Downton Abbey” appearance will break your heart. Bonneville learned after his mother’s death that she had had a life in the secret service, and, steadfast onstage and off, accompanied his dad along the darkening path of dementia.

Big Man and the Little Men: A Graphic Novel
Clifford Thompson
Other Press
$25.99

April Wells, a young memoirist and essay writer is thrilled but puzzled that she has been chosen to cover William Waters, the presumptive presidential candidate, during the in the debate to be held in her hometown’s new stadium. Is Waters the good guy he’s painted to be? A young woman approaches April accusing Waters of abuse. The opponent? Anti-intellectual, bigot, grasping power through divisiveness. Best to hold those accusations or be open and risk Waters’s chances? April confers with her editor who is then “disappeared.” She seeks an old friend, Big Man of the title, who helps open her eyes to see and ask, who planted the rape rumors? And why? One must never forget to question cui bono, and further, can wrongs beget rights?

Silence, Smilges asserts, does not have to equate death as has so often been held gospel. They quoted both Jacques Derrida (“who concluded silence is at the foundation of all signification, that it ‘bears and haunts’ meaning”) and Michel Foucault (“there is not one but many silences…that underlie and permeate discourses”) as the starting point for their own theorizations, that silence is meaningful even though requiring “a different analytic than speech.” Silence, indeed can be generative and performative, the latter intensely displayed in the photographs of Rodney Bell’s aerial wheelchair dance during Sins Invalid Performance in 2008. Smilges first explores the history of many negative attitudes towards silence, then invites one to explore what people “whose bodyminds signify more than their words” convey through silence.

My Government Means to Kill Me
Rasheed Newson
Flatiron Books
$27.99

Imagine a Black Candide, come fresh from the Midwest to the Big Apple, replete with dreams and urges to cultivate many gardens… It’s 1985, seventeen-year-old Trey (Earl Singleton III), fleeing Indiana, renouncing a six-figure trust fund, lands at the Chelsea Hotel with no financial prospects. AIDS is rife. Over two years, many evenings are spent cultivating black denizens of the Mt. Morris Baths–including an elderly Bayard Rustin who becomes Trey’s mentor. During daylight hours Trey clashes with the likes of Fred Trump and myriad others for whom the author has provided explanatory footnotes. An odd addition to either a novel or a purported memoir, but one must remember the 80s now are 40 years gone. Anger, violence, bad words and sex! A roller-coaster read.