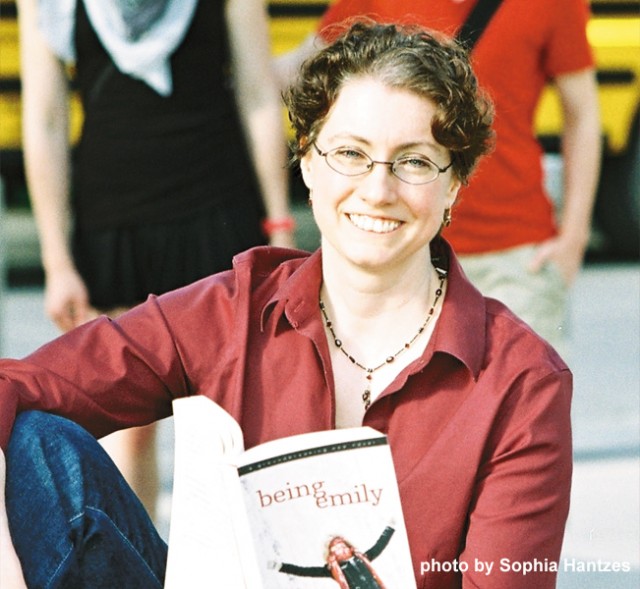 “It’s a love letter to my friends in the trans community,” Rachel Gold said with a contagious smile. “I understand what it means to be different.”

We had just sat down to talk about her book, Being Emily, which is the first youth (read teen) novel featuring a transgender lead character. It also happens to be Gold’s debut novel.

Gold is well familiar with the challenges transgenders often face. She had a four-year relationship with a transwoman, during which Gold founded the online support group, GenderPeace, for which she also acted as moderator. In fact, Gold described her “perfect woman” as a “Pisces transwoman” with broad shoulders.

Being Emily centers on a year in the life of sixteen-year-old swimmer athlete Chris Hennes as he—I’m trying to be careful about pronouns here—comes out as “Emily” and takes the first painful steps toward transitioning to female. The story takes place in “Liberty, Minnesota,” a fictional blue-collar town an hour outside the Twin Cities where no one’s ever heard the word “transgender.” Emily is helped by her girlfriend Claire, a “religious Goth,” who in turn must deal with her own issues about sticking with a boyfriend turned girlfriend.

The book begins with Chris (Emily) self-disclosing to Claire that he’s always considered himself female. We follow as Emily slowly emerges with a series of first steps—make-up, a solo mall trip, using a woman’s bathroom (and getting caught), and meeting in person with an online mentor, Natalie, another transgender teen who lives in Minneapolis and whose parents are far more accepting. With Natalie’s help, Emily takes her first shopping trip for female clothing—a pair of yummy brown slacks from Banana Republic. Natalie also supplies Emily with hormones and a testosterone blocker—a story line that gave me pause given the very real problem of illicit hormones and their attendant significant health risks. (Gold has promised to post a warning against off-prescription hormone use on the website for the novel, www.beingemily.com.)

The book also includes stereotypical characters—a conservative therapist who believes in restorative therapy; Emily’s mother who freaks over the idea that her son might actually be a girl; a gearhead father who’s supportive even if he doesn’t fully understand; and homophobic football players. Luckily, Emily meets a woman therapist who’s sympathetic (it’s also a great message that therapy is crucial for anyone transitioning).

In short, Being Emily paces along nicely, and it’s a wonderful read for any teen (or anyone else) dealing with gender issues or the question of non-conformity for a hundred other reasons.

Even with Gold’s special history in knowing transgenders, I was at first very skeptical about her ability to accurately capture what it meant to live with gender dysphoria. In other words, I felt that unless you live it personally, it’s almost impossible to really understand it.

I was pleasantly surprised to find that Gold proved me wrong. She does a fabulous job of explaining what it means to know in your heart that something’s not right, that the body you were born with doesn’t match the true person inside. Likewise, she gets what it means to break free from societal expectations about gender roles, and the exhilaration that transgenders experience with self-acceptance and finally living an authentic life, wherever that journey may lead them.

Most of all, Gold captures the self-doubt and fear that every transgender experiences in the coming out process. Toward the end of the book, Emily’s self-reflection was right on:

Mom’s comment about me not thinking like a woman haunted me. Was it possible that even though I felt female inside, my growing up as a boy had changed me forever? Would I never fit in anywhere except for the transgender community? Although I found support there, I couldn’t imagine living my whole life inside those boundaries.

In short, Being Emily breaks important new ground for transgenders of all ages everywhere. Just as importantly, the book goes a long way toward helping mainstream readers understand what it means to be transgender. I trust that Gold’s novel will become the touchstone for the next generation of youth seeking to rid themselves of their gender demons. This book helps light the way and is reason to hope that soon, self-disclosing as “transgender,” will be greeted with loving hugs of acceptance rather than glares of intolerance and the isolation that all too often follows.