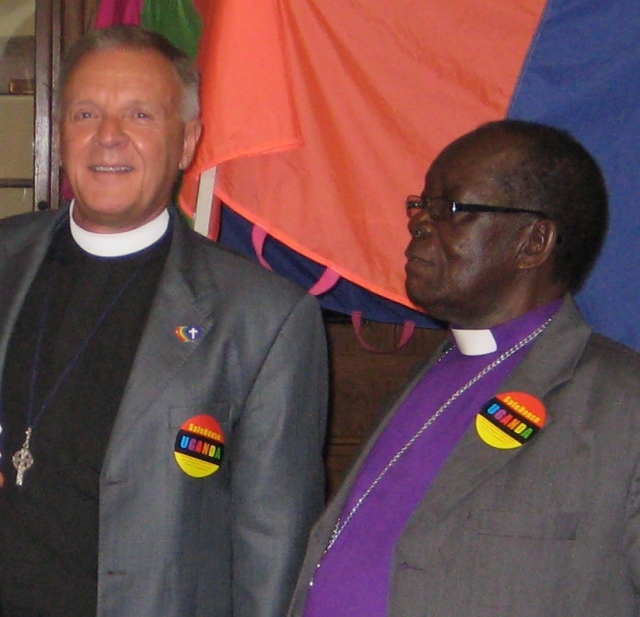 Bishop Christopher Senyonjo has been a straight ally of glbt Ugandans since he was denounced by the Anglican Church in 2001. His family has even come under threat. He will speak at the Parkway Theater at a reception before the screening of the documentary, Call Me Kuchu, hosted by Wingspan Ministry as a benefit for Ugandan glbt rights. For background on the situation you can also refer to Lavender’s Uganda: An Overview of How White American Evangelicals and Enriched Ugandan Politicians Target Lesbians and Gays. Reverend Rick Warren of Saddleback Church in California has been a central figure in fueling the homophobic fires in Uganda. Lesbian celebrity Melissa Etheridge and her wife, Tammy Lynn Michaels, ardent apologists for Warren, have yet to denounce Warren’s actions.

Call Me Kuchu examines the reign of terror exacted on glbt Ugandans since the introduction of the violently draconian Anti-Homosexuality Bill of 2009. And that includes information about the brutal murder of Uganda’s foremost glbt rights activist, David Cato, and a massive media smear campaign that has been waged against glbt Ugandans.

Unfortunately, that bill has been re-introduced. It has dire ramifications for both glbt people and persons living with HIV/AIDS. Bishop Christopher says “it is contemplated that even if you know that someone who is lgbt and didn’t report, that would also be a crime. So how can these people come out for treatment? It is very difficult. These people can just die without any treatment (because of) this. So that’s why we feel this bill shouldn’t even be considered in this modern world.”

Despite all this the bishop is part of a center that is sympathetic to Uganda’s gay and lesbian community as well as to the country’s HIV/AIDS crisis. He says “the place we have is a gay-straight alliance organization. While this bill was brewing, I thought we needed to work very closely together, between the gay and the straight people. So what we are trying to do is to have people working together, whether they are gay or straight. We have at the center an HIV/AIDS program for people. They get tested. They get treatment. So this is helping. Of course, we are trying to help lgbt people but we are not exclusive.”

Legalize Love For Everyone – a Screening of Call Me Kuchu
With reception hosted by Bishop Christopher Senyonjo and Alison Arngrim
Parkway Theater, 4814 Chicago Ave., Mpls.
Sun., July 15
Reception at 7pm
Film at 8pm