Art And Activism In The 2020 Census 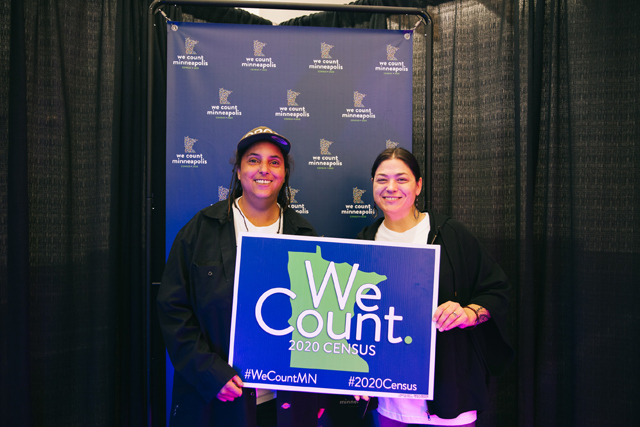 Roxanne Anderson and Anna Meyer are involved with Creative CityMaking, a project to engage underrepresented communities through a partnership between the city of Minneapolis and local artists. Photo by Ryan Stopera

Creative CityMaking, a partnership between Intermedia Arts and the City of Minneapolis, forms connections between local artists and city planners to address transportation, land use, economic, environmental, and social issues.

A city is nothing if not its people. Which is why a fair and accurate census is so important. If an area’s demographics are measured incorrectly, the effects are most felt by the ones who are left out: minorities. According to St. Paul’s Neighborhood House, in the 2010 Census, North Minneapolis was undercounted by more than 7,000 people, which resulted in a loss of two city council members and nearly $200 million in federal funding over ten years.

By undercounting such a significant portion of the population, residents lost political power and representation, as well as funding for schools, hospitals, roads, Medicaid, and other necessary programs. Areas that are overcounted receive more federal funding, while areas that are underfunded—such as North Minneapolis in 2010—receive less funding. Because undercounting typically takes place in minority communities, it leads to even greater disparities.

Creative CityMaking, a project to engage underrepresented communities and encourage a more responsive government through a partnership between local artists and the City of Minneapolis, addresses racial inequities by cultivating meaningful intersections between City staff and the community.

Two of the artists involved in Creative CityMaking, Anna Meyer and Roxanne Anderson, were selected from a panel to work alongside the City’s Neighborhood and Community Relations Department on the WeCount Minneapolis Census 2020 project to ensure a more fair and accurate census than the last one in 2010.

“The census has long been a tool used by the government to organize and provide resources to communities, but it has undercounted the same communities that are underrepresented in decision making,” Meyer and Anderson say. “Taking the lead from community, the City has decided to take a different approach to the 2020 Census by investing early in undercounted communities in partnership with Creative CityMaking, and work with community-based artists to ensure everyone feels empowered to be part of the census. The City’s interest in collaborating with artists on this project is to ensure the voices and experiences of historically undercounted communities are reflected in our work to ensure a complete and accurate count.”

Creative CityMaking creates partnerships with City departments that are interested in working with communities that have not historically participated in the City’s decision making processes. Often, the engagement systems that have traditionally been used by these departments work for some people and not others, and they tend to preference those in the community with the resources and time to engage government. 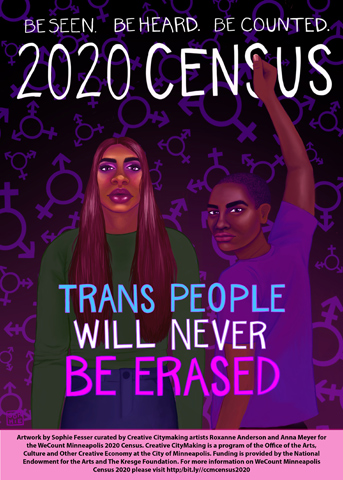 “Our artists create ways to connect with communities who don’t have the time, resources, trust, capacity, or understanding of why it’s important to get involved in these processes,” Meyer and Anderson explain. “Often our artists are translating back to communities why it’s important to participate and how to participate. They create playful and fun ways to engage in very serious issues. We have worked with the Department of Regulatory Services on developing engagement strategies for housing inspectors to work better with renters. This work led to a new renters first policy.”

Meyer and Anderson say Creative CityMaking has also worked with Neighborhood and Community Relations on the Blueprint for Equitable Engagement, a policy document that drives the city’s five-year vision for innovative and equitable engagement. Additionally, they have worked with the Long Range Planning Division on developing new engagement strategies outside of the traditional open house model commonly used by planners. This work led to the inclusion of artists in the Minneapolis 2020 comprehensive plan community engagement process.

The two artists got involved with Creative CityMaking several years ago when they learned about the organization’s opportunities to get involved in local art and supporting the community.

“We both agreed that it was important to include artists as long as we were honest and clear about the intentions of the work, and then we worked out a way for artists who were from those communities most impacted by census undercounting to get involved,” they say. “That’s the way the program functions; we involve artists from underserved communities in helping the City reach out to those communities.”

“We were selected from a pool of artists who applied by a team of folks from the City and from community partners,” Meyer and Anderson add. “We have [been] partners of thirteen years personally, and we are partners in business and community work. We live, work, and create on the south side of Minneapolis and beyond.”

To complete your household’s 2020 Census, and for updates about WeCount Minneapolis 2020, visit wecountminneapolis.org. For opportunities and up-to-date information about Creative CityMaking, subscribe to their newsletter: public.govdelivery.com.