Armani Chose Me: A Rescue Story 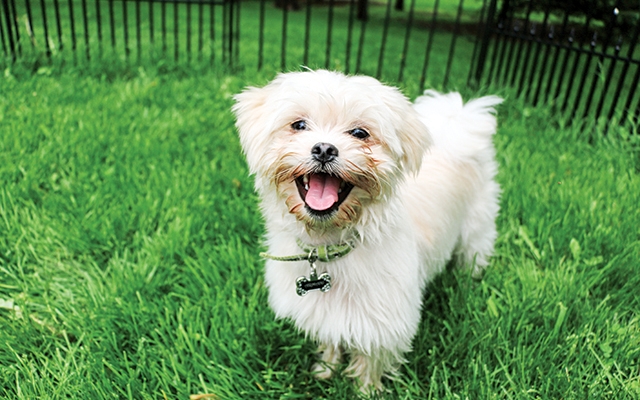 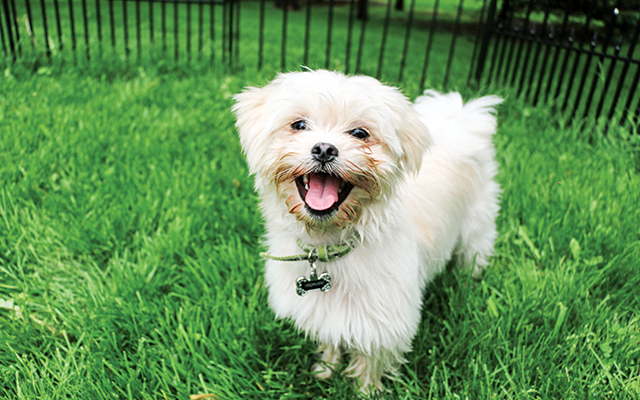 Three months ago a rescue dog adopted me. Armani (as he came to be called within minutes of meeting him) is a quiet and cuddly shih tzu and poodle mix who was rescued from a hoarding situation in Kentucky by Minneapolis’ Safe Hands Rescue. When I first met him, he was being fostered by Lavender’s own Nell Gelhaus and her wife, and it was love at first big-brown-eyed sight.

It was Grammys night and Nell and I never miss an awards show, so I grabbed some snacks and went over for a viewing party. To my surprise, young Armani was in their care. Armani was tiny (this was a seven-month-old shih-poo we’re talking about here) and practically hairless. You see, when he was rescued he suffered from terrible mange and had nearly all of his hair shaved off. But that didn’t stop him from immediately abandoning his foster parents to sit on my lap and cuddle nearly the rest of my night’s visit.

From that moment, I was smitten. I couldn’t get him out of my mind and every time I saw him while he was being treated before he was eligible for adoption he would immediately jump in my arms. Yes, Armani adopted me; not the other way around.

As a gay man with no inclination for children, I had always been drawn to dogs, and as a single man getting ready to graduate with his master’s degree, I was at a stage in my life where I was ready to do something with impact, move out of my comfort zone, and be responsible for another creature besides myself for once.

Adopting a homeless pet was the solution for me, and almost instantly upon meeting Armani, my life began to take on a new shape. It gave me a sense of being needed, a knowledge that something outside myself depended on me solely for its happiness and basic survival. In many ways it was my first step into adulthood. Armani has an affinity for Barbra Streisand (he’ll stop whatever he’s doing and stare at the TV if you start playing her movies), avoiding puddles, and shopping. A perfect match, right?

My world opened up in ways I could never have imagined once Armani was at my side. People whom I had never spoken to came up to me to ask about him. In fact, I had passed many of these same people countless times on the street without even a “hello”. Living in Minneapolis, Armani and I have met many gay and lesbian dog owners, particularly rescue-dog owners, and I was welcomed to a wonderful network of information and support from other people who shared the honor of raising these deserving creatures. The pet supplies store is quickly becoming my social circle and it’s clear that Armani doesn’t mind that fact. After all, he gets a play date out of the deal.

Since adopting Armani, I’ve started to think about the relationship between the gay community and rescue animals and what I perceive to be a special bond. For many of us, growing up gay meant growing up with a sense of “otherness”, a sense that we didn’t fit in. We learned that somehow there was not a place at the table for us. I believe that many people in the GLBT community are drawn to adopt a homeless pet because there is a mutual understanding and respect for displacement and “otherness”.

Personally, my identity has never been a secret (how can it, when I grew up idolizing the Spice Girls and Destiny’s Child), and thankfully I never underwent any of the horrible bullying making headlines today. But that doesn’t mean there still weren’t any funny looks or whispers in the hallway that have made me more empathetic to the “underdogs” of society — and there is no more heroic underdog than the shelter pet.

I recently overheard two gay men talking about one of their mutual crushes, who happened to have a rescue dog. One man said that to him, the fact that this crush had a rescue dog was one of the sexiest things about him. The other guy jokingly said, “Oh, he just wants people to think he is not superficial.” Whatever the reason behind this act of kindness and compassion, I encourage my gay brothers and sisters to consider extending their circle of compassion to include homeless animals through adoption, donation, or volunteering.

By some estimates, there are up to 6 million dogs euthanized every year in America’s shelters (note: most of Minnesota’s shelters are low- or no-kill). While many households are only interested in buying a dog from a breeder or pet store, there are vast numbers of healthy, adoptable dogs languishing in high-risk shelters across the country. Having my own little bundle of joy has given me a great opportunity to speak to people about the urgency and importance of adopting and rescuing a companion animal rather than buying one. Today, as a matter of fact, there are more and more purebred dogs available at shelters as the closing and policing of the puppy mill industry continues to draw more attention.

During my three short months with Armani, he’s already changed my life, perhaps most famously by serving as the one of the sole reasons I post to social media anymore (well, him and Beyoncé). Whoever said money can’t buy you happiness has never paid an adoption fee. But outside of the public eye, he’s forced me to be more active and lose weight, get my life in order (and destress!) after graduation, and become a much more stable human being. It’s clear to me that the best things in life… are rescued.