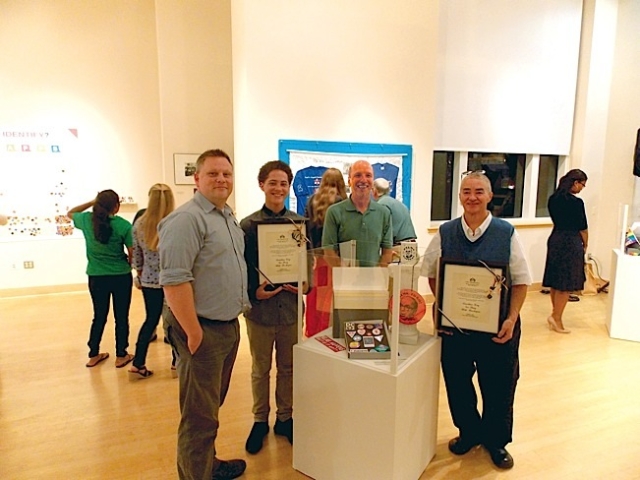 Archivist and University of North Carolina at Charlotte (UNCC) Prof. Joshua Burford stresses that the LGBTQ archive he spearheaded is not a complete history. It is growing, and a complete history of anything is, of course, an impossible task.

Yet the King-Henry-Brockington Community Archive of Charlotte comes close, with its array of LGBT publications, fliers, historical documents and memorabilia.

Housed in the Special Collections of the J. Murrey Atkins Library, the collection is one of the largest in the Southeastern United States and spans decades.

“We have the second or third largest collection in the Southeast,” Burford said. “Emory’s LGBT holdings are probably a bit larger than ours, only because they have been collecting for a lot longer than we have. And Duke probably has a tad bit more stuff than we do, of physical material, but we’re highly competitive at this point.”

The conversation for the archive began in early 2013. Burford previously worked to help create an LGBT archive at the University of Alabama in Tuscaloosa. It was a smaller endeavor to the Charlotte archive, as it was focused almost exclusively on the university’s LGBT student organization.

It whet his appetite to try something on a larger scale when he moved to Charlotte to take a teaching position at UNCC. He began collaborating right away.

“It was myself and O’Neal Atkinson — he’s at Time Out Youth now — and then Jess McDonald, who is a friend of ours, who was working for Campus Pride at the time,” Burford remembered. “The three of us got together, I think initially thinking we might collect materials and house them in the [LGBT] Community Center. And then shortly after that, we had a conversation with the archivist at UNCC, who said, ‘If you guys want to lead up the effort to build the collection, then UNC Charlotte Special Collections will house it, preserve it and then make it available to the public.’”

They received their first donation in the summer of 2013, and the items have continued to come in ever since, with no sign of stopping.

“I don’t think we have any end game,” Burford said.

What the collection contains

The collection is already impressive.

“The hardest part,” Burford said, “is the research. Like, whose history do you want to get, and is it possible to get it? I spent the first, probably, four or five months just researching what I could find.”

Once you track down the history, he said, the next hardest part is getting people to trust you, “that you’re going to preserve their stuff, and that it’s going to be available and useful.”

Fortunately, it was obvious within minutes of meeting Burford that his intentions are pure and his work ethic is laudable. Before long, despite his newcomer status, he had gained the community’s trust.

The collection bares that out.

“We definitely know that we have [archives of] the largest queer publication in the Southeast [QNotes], that’s for sure,” Burford said.

QNotes donated its nearly 30-year archive, plus several issues of Charlotte Free Press (1975-79) and other miscellaneous Charlotte publications in April.

The collection also includes the complete history from nonprofit organizations such as Time Out Youth, a support group for LGBT young adults formed in Charlotte in 1991. While these records are essential for understanding a city’s LGBT history, the smaller holdings are likely to draw a lot of attention as well.

“I think the stuff that’s really interesting, from an archival point of view, is the small things that we weren’t planning on,” Burford noted. “Like, we have a trans newsletter that is potentially the first one of its kind that we got from [local activist and naming honoree] Sue Henry. That early trans history is really hard to find. So getting that is a really big deal.”

Burford also mentioned the “scads of ephemera,” including an AIDS quilt and items from the 1993 March on Washington for Lesbian, Gay and Bi Equal Rights and Liberation.

Much of the archive’s materials come from the private collection of another naming honoree, activist Donaldson King, who Burford said “chronicled his life in a way that is a dream for an archivist. He kept literally everything.”

In addition to serving as QNotes’ first editor, King worked for years at The Charlotte Observer and was active in fighting against the entrapment of gay men by law enforcement.

“It really is the scope of the things that we have that is so outstanding to me,” Burford said. “We’re looking at a recorded history of things you can read from the middle ’60s to the present. So it really is robust, and it really is an LGBT and Q history.”

The publicity is helping to ensure that it is indeed a growing and complete history.

“Folks that were really active in Charlotte in the ’80s and ’90s who have left [the area] are finding out about the collection, so now we’re starting to get a lot more stuff from out of state, which is great,” Burford said. “The process has sped up, which means we’re going to be able to make the collection more available to the public in a quicker way.”

Burford says naming the archive was no small task.

In addition to the aforementioned King and Henry, the archive is named for Blake Brockington, a 2014 graduate of East Mecklenburg High School, who worked for transgender rights and gained national attention when he was named homecoming king at his high school as an openly transgender student.

“It was one of the toughest decisions I’ve ever made,” Burford said. “It took me a year to decide what to name it. The idea of naming a collection with a scope as big as this one, that represents so many different identities — [from] sexual identities, to gender identities, [to] race and ethnicity — it was always going to be difficult to give it a name.

“It was never going to be just one person,” he continued. “We knew we wanted to name it after Don King, because he was so influential in getting the modern community in Charlotte on its feet, organized and moving. I mean, the man had his hand in just about everything. So that was a no-brainer. But the other names in the collection were a bit tougher.

“So when we settled on the name, each of the three people that we chose had a huge impact on the community in very different ways. And all three of them represent different identities: gay, lesbian, trans. They represent different ethnicities, and it was intergenerational. So after a lot of soul searching, after a lot of conversations and a lot of questions, the three of them really rose to the top as the people that I wanted to honor in the name of the collection.”

The reaction to the naming, and to the archive in general, has been overwhelmingly positive, Burford said.

“The reaction to the naming has been great. People are really excited about who we chose.

“The collection in general, I don’t even know that I could encapsulate how well it’s been received,” he said. “I probably get weekly phone calls and emails from people who have either heard about it recently or have been watching it grow all along who are just thrilled that we’re collecting it.

“And then by extension, the word about what we’re doing is starting to make its way around archival circles around the South,” Burford continued. “So other people in other places are calling to see how they can replicate what we’re doing here in other parts of the Southeast.”

Burford says he is working with North Carolina State University to get them started on collecting their LGBT campus history for the first time.

A group of archivists in the Southeast are coming together to create a new endeavor, of which Burford is a key part.

“A group of us in North Carolina are working on a new project to organize a queer history collection regionally,” he said. “The project is called ‘OutSouth,’ and we’re in the process right now of building teams of archivists, oral historians and historians all over the Southeast, in all different Southern states, and we’re going to be working to pull together the existing collections. And we’re going to have a first-of-its-kind meeting of Southern queer historians, archivists and oral historians next summer in Charlotte.”

It is exciting news for anyone interested in knowing more about what it means, and what it has meant, to be LGBT in the South.