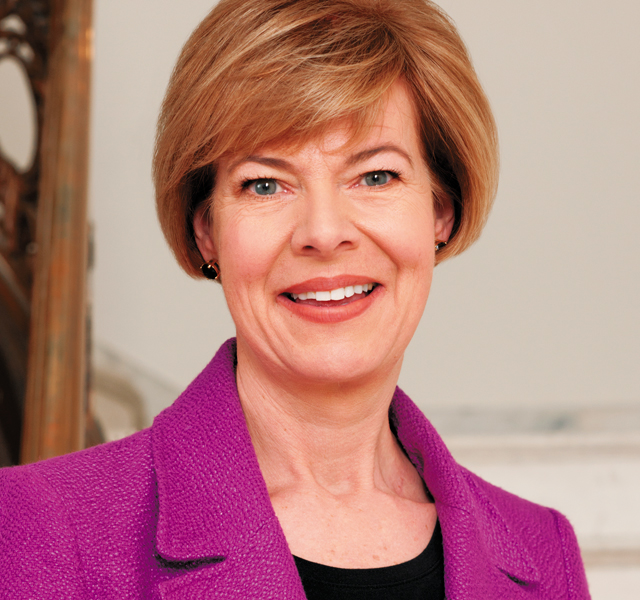 Someday, there will come a time when we no longer have to call out when someone is the “First Woman” or “First Lesbian” or “First Gay” or “First Person of Color” Something-or-Other, but we are still in an era when these firsts are important to recognize. Progress requires attention and encouragement, especially for underrepresented groups of people. United States Senator Tammy Baldwin from Wisconsin is not only Wisconsin’s first woman in the United States Senate, but is also the United States Senate’s first openly gay Senator. I had a chance to speak with her earlier this month about being the keynote speaker at the Midwest Family Equality Conference this weekend.

Andy Lien: It looks like Minnesota gets to welcome you to your neighbor state, thanks to the Family Equality Council. What great timing, considering what’s happening in at the Minnesota Capitol this session.

Senator Baldwin: Yes. We’ll be looking at the arc of progress on GLBT equality, particularly focusing on family issues.  It will be a celebration of the incredible work of the Midwest Family Equality Conference over the years.

AL: As far as the arc is concerned, this may be the fastest moving movement in Civil Rights history and, right now, it’s focused on marriage.  Back in 1994 when you were in the Wisconsin Assembly, you proposed legalizing same-sex marriages. That’s almost 20 years ago. What are your reflections on this progress?

Senator Baldwin:  I can remember convening a group of folks who were family law experts and GLBT activists and talking about how can we protect our families and what sort of state law would work. We looked at the benefits and rights that are associated with marriage. We talked about, “Should we do statewide domestic partnerships or civil unions?” when no other states were talking about it extensively. We had a lot of discussion at the local level about cities passing ordinances, private corporations and nonprofits passing policies to recognize families of their workforces, but it really wasn’t happening a lot at the state level. I tell you this because even the GLBT activists I talked to said “this’ll never happen.” People were incredulous even talking about the idea. A friend of mine who was a part of that discussion back in the early ‘90s came up to me and said, “I can’t believe all of the changes I’ve seen today, and I do believe I will see this in Wisconsin in my lifetime.” They were pinching themselves at how much progress has been made in so short of time.

AL: That sort of optimism will be transferred to the families you’ll be speaking to at the Midwest Family Equality Conference. Plenty of those kids will grow up not necessarily even knowing this was an issue.

Senator Baldwin: Of course. And many of those young people, those children, won’t have the context of how impossible this seemed only a couple of decades ago.

AL: Even here in Minnesota, we recently saw the proposal of civil unions by a group that was comprised mostly of members of the GOP. That’s something that took most of us aback; we would never have entertained that notion even a couple of years ago. Of the U.S. Senators, we’re [at time of press] looking at all but three DFL Senators supporting marriage equality. Great strides are happening.

Senator Baldwin: We just returned from our spring recess and we’re back in session. I had a chance to see some of my colleagues who, over the last two weeks, announced their support for marriage equality. We had little discussions and some of them were saying that this was “one of my proudest days in public service, to be able to make that announcement.” People showed great courage because it’s not necessarily politically popular but, boy, what a last few weeks it’s been.

AL: Last fall, the Democratic National Party wrote into its platform that marriage equality was something to strive for as Democrats. Do you see that as affecting your colleagues? How does that affect politics?

Senator Baldwin: Certainly party platforms and laws are very different things, but I do think that was an important step in the vision for the Democratic Party and also as a stark contrast between what you will see in the Republican platform which has few–if any–references to GLBT equality. Obviously, the platforms are the vision statements for the two parties and it exposes how very different they are. I gave a speech this past weekend about the progress on all different levels: you have party platforms, you have laws, you have court rulings, but we also have the constant need to change hearts and minds. We don’t want to just live in a country where our equal rights are enshrined in the law–but we’re certainly fighting very hard for that to happen–we want to live in a country where we are fully embraced as equal U.S. citizens, as Americans.

Senator Baldwin: When you look at whether it’s the President’s evolution on this issue or the many U.S. Senators and other office holders who, in the last few weeks, have announced their full support for marriage equality, the common thread has been how loved ones, family members, neighbors, and coworkers have influenced their decisions. For the office holders, my advice would be to stick to that narrative: how have the gay, lesbian, bisexual, and transgender people who you’ve known impacted your view of their worth, their wholeness as citizens?

Join Senator Baldwin and many of our local politicians, friends, families, and professionals who are part of (or are working with) GLBT families in the Midwest at the Midwest Family Equality Conference taking place this weekend, April 19 & 20, in Minneapolis. For more information, go to www.familyequality.org/get_involved/events/midwest_family_equality_conference.