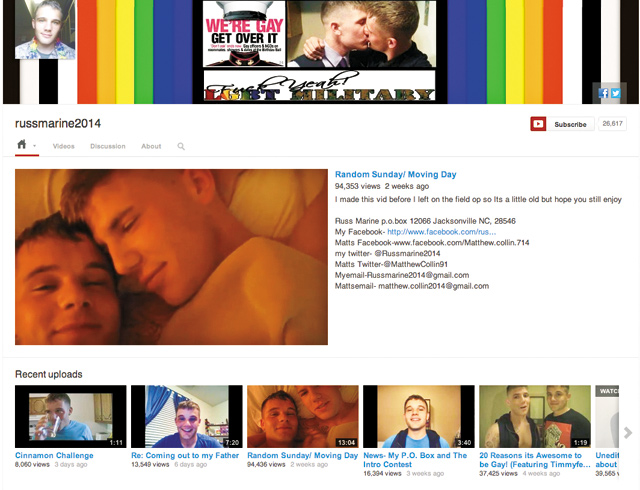 ‘Coming out of the closet’ is a quintessential part of the GLBT community.  We are a minority group that has to tell our families and our friends we are different.  There are millions of stories in the world about our journeys but sometimes there is one that is so special it deserves retelling.

This story comes at a time when our laws and our society intersected and allowed the opportunity for these two individuals to do something good for their fellow man.  With the repeal of Don’t Ask, Don’t Tell, they were finally allowed to tell their stories and they have done so in an honest, courageous, and selfless way.

Let me introduce you to Russ and Matt, two of America’s favorite gay marines.

I found their video essays on Youtube.  They are the brainchild of Russ, a young marine from Indiana who is stationed in Jacksonville, North Carolina.  They also include his boyfriend Matt, another marine who is from Ohio.  Their ‘coming out’ stories aren’t much different than most in the GLBT community.  However, they didn’t stop at telling the stories.  Russ and Matt have made ‘coming out’ their mission to help others.  I interviewed them by phone on April 14, 2013.  This is their tale. 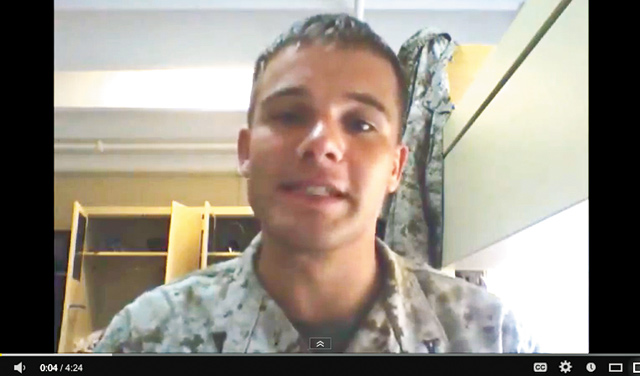 We begin with Russ.

Russ decided to tell people he is gay.  He’d told a few marine friends at first.  Russ said, “I came out to a friend of mine and it went so well.  The [marine] said, ‘Man, I don’t care.’  I came out to a couple more friends and they all said the same thing.” In fact, “coming out” in the Marine Corps was such a positive experience, he wanted to share it with others.  “What’s the best way for me to tell others about this amazing thing that just happened?  My brothers in the Marine Corps have come to accept me for who I am.  I said screw it, I’ll make a YouTube video about it.”  And so he did.  But, he didn’t stop there.

He then made a video called, “Gay Military, come out already.”  In this video essay he urges other GLBT marines to come out of the closet.  His reasons were two-fold.  First, he believed with the repeal of DADT, GLBT people in the military today have a responsibility to pay back those who’d worked so hard to make it happen.  Russ said, “There were so many people who wanted to come out before the repeal and they didn’t get their chance.”

There was even a more powerful reason he believed marines should “come out already.”  News stories tell of the horrific suicide rate among marines.  The same is true in the GLBT community.  Russ said, “When you add those things together it’s just terrible.  Coming out is one thing you do to feel better about yourself.  It gets rid of that depression.  I know.  I went through it.”  Instead of coming out, dealing with it, and getting on with his life, Russ felt he had a higher purpose.  He would do what he could to show others ‘coming out’ was necessary for a happy, healthy life. 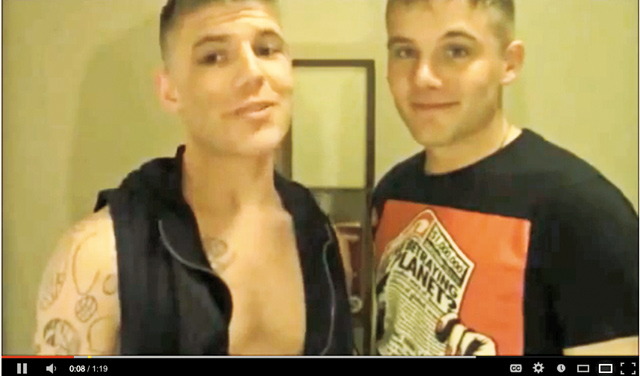 Matt’s ‘coming out’ was via a different social media venue.  He came out to everyone he knew on Facebook.  His experience with the marines was like Russ’.  “Actually it’s been very positive.  Aside from a few people here and there, ninety-nine percent of the people I’ve come across have been totally accepting of everything I am.”  Of course, not everyone was overjoyed with him revealing his sexuality.

In a video made by Russ called, “Unedited interview with Matt about coming out,” Matt explained his father struggled and his older brother isn’t really talking with him right now.  But, he doesn’t regret how he did it.  “I don’t think they liked that I came out on Facebook to everyone but I had to do it.  It was like ripping a Bandaid off.  It’s hard to come out to one person at a time and I just needed to do it.”

This is something else that makes Russ’ video essays quite special.  Russ came out to his mother over the phone and videotaped it.  He wanted to show just how difficult, uncomfortable, and trying the process is but is worth it in the end.

Russ told his mother by phone because she’s in Indiana and he’s in North Carolina.  Because of the distance, he couldn’t just drop by and tell her.  An incident made him realize he needed to tell her sooner rather than later.  “I was just sick of lying about things.  The day before [he told her], I’d went on a date and I’d wanted to tell my mom about it.  I remember having to change the name and I hated doing that.”  He realized this couldn’t wait.  He had to tell her the truth.

In ‘Marine comes out to Mom,’ we watch as he fidgets with a painful grin on his face waiting for a response from her.  The uncomfortable silence as she takes in what he’s said is deafening.  Russ begs her to tell him what she thinks.  When I asked what was going through his head, Russ said, “The whole time I was thinking ‘please say something, please say something.’”  In a later video, he interviews his mother in person.  She expresses worry about his safety as a gay man. 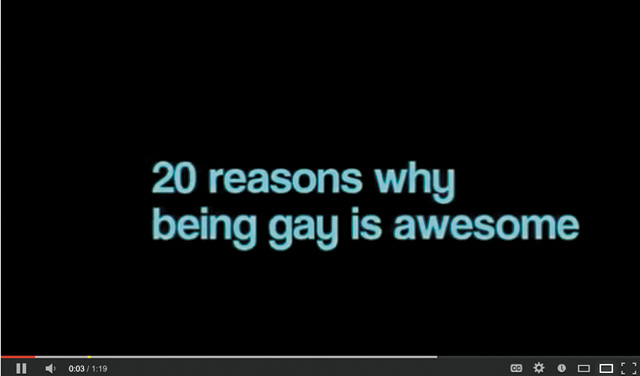 Matt’s family wasn’t worried about his physical safety.  But they were worried about possible “social death.”  He said they fear “my life will never be the same as a straight person.”   That doesn’t concern him.  He believes coming out was the right thing to do.  But, there are downsides and Russ hasn’t been afraid to show the process, warts and all.

Russ’ biological father no longer speaks to him.  I asked why he included those painful, embarrassing parts in the video essays.  Russ explained, “Because, people need to hear it. Yeah it sucks.  I wanted to tell true stories and not everything is good.  I guess I wanted to prepare people who are coming out.  It’s not always going to be great.  But, it’s worth it.”

One of the benefits Russ got from doing his videos is a cute marine boyfriend from Cleveland.

Matt knew about Russ and what he was doing with his videos before they ever met.  “I really enjoyed and agree with the messages he’s putting out there.”  At one point, they were at the same event and “I saw him and I said to him, you are the infamous Russ Marine.”  They started dating and eventually Russ got Matt in front of the camera with him.

Matt recalls, “When I started dating Russ, I had no intention of being part of it.  Then he wanted to do the ‘Boyfriend Tag’ video.  He turned on the camera and we just went for it.”  This video has serious parts, but it’s also playful and joyful.  Several of Russ’ videos are about the happy part of being gay.  It’s not all grit and pain.  There is a love of life in the interplay between coming out and becoming comfortably gay in these videos.

Last time I checked, ‘Boyfriend Tag’ had a quarter of a million hits on YouTube.  Matt said it “feels really good we are reaching so many people.”  Russ, on the other hand, had a more jubilant feeling about the message of ‘Boyfriend tag.’  “When you meet a guy and you want to scream it from the rooftops, you don’t have to. You can use Youtube.”

Every GLBT person’s ‘coming out’ story is different.  But, within those stories are certain aspects most stories share.  There are people who surprise you with their acceptance.  Some do not understand and may reject us.  It is stressful, difficult, and anxiety-ridden.  The process is also empowering, liberating, and joyful.  The stories of Russ and Matt are all those things.  Their willingness to share it with others gives us all a reminder of the importance of ‘coming out.’  It also gives those who have yet to come out a taste of what happiness being out can bring.