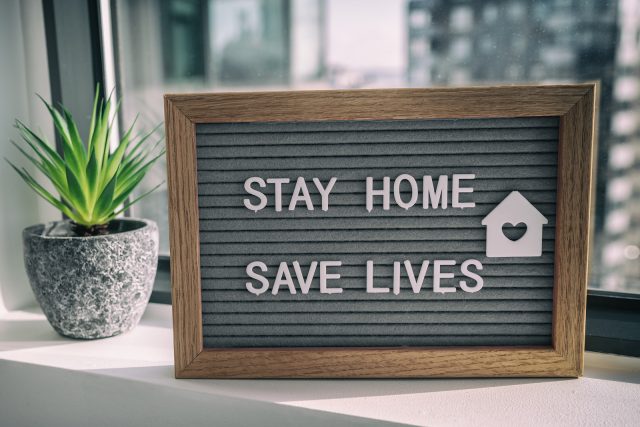 The recent news photo of a woman with a “My Body, My Choice” sign is not pro-Roe v. Wade, but is flouting the order to “shelter-at-home,” currently issued in 44 states , DC and Puerto Rico, in an attempt to halt the novel coronavirus. However, protesters, among them “My Choice,” are supposedly claiming the right to become ill with COVID-19, from which the American death total now stands at 93,313 as of this writing.

Enforced isolation has been damned by protesters as “slavery,” “Communism,” “concentration camps,” among other epithets, and the disease itself dismissed as lies and a hoax, something not to be “believed.” But SARS-CoV-2 is not a matter of belief, nor a partisan issue to be argued. SARS-CoV-2 is not alive, cannot reproduce like a bacterium; it needs access to human cells. It is a single long string of RNA surrounded by a shell of lipid, which, if breached—say, by vigorous hand-washing—will disintegrate.

But should the virus, by droplets sneezed or coughed, reach a cell in a recipient’s nasal tissue, it will use that cell to clone itself to infect that individual. SARS-CoV-2 prefers cells coated with the ACE2 protein. Finding such a cell, the virus spike (the “corona’) attaches to that cell, merges with it and reconfigures, forming a channel, through which the virus’s genetic material snakes, entering the cell, and directing it to make copies of itself. If an infected person is isolated, the virus has nowhere to go, can infect no one else, but out among others, the virus can spread.

While understanding that millions of people are now out of work, fearing for the future, opening the country too soon can have disastrous effects. New information continues to surface. In January, in Guangzhou, China, nine people from three families sitting near one another in a windowless restaurant were infected by COVID-19. It is suspected that the building’s air-conditioning system dispersed viral droplets further than expected.

Recent post-mortem examinations here determined that the February 6 death of a 57-year-old San Francisco woman was due to the coronavirus. This pushed back the timeline from the earlier February 26 date when it was believed the virus first transmitted locally. Members of international ski teams on an annual gathering in Colorado were infected; a group elderly poker players who had met in casinos and had held weekly home games for years were infected and there were deaths in both groups. Coronavirus and its lethality is not a hoax or a lie. It has affected every country, worldwide, and the deaths are real and continue to happen.

An Easter note from a friend in Suva, Fiji, reported they are on lockdown, and cannot, even in their island paradise, go to the beach. When all is still, he notes, they can hear the surf breaking on the outer reef.