A Word In Edgewise: Meditation on an Inland Sea 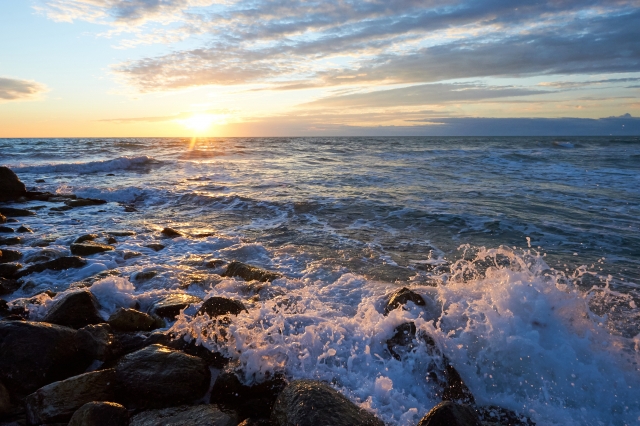 I lay in a quiet room, a technician amping the sound of blood coursing up my carotid arteries, pumping O2 into the gray-matter in my skull, over and over, as they did before I was born.

Coincidentally, I had bought Douglas Preston’s thriller, Tyrannosaur Canyon, to read in the waiting room, having just read his March 29 The New Yorker piece, “The Day the Dinosaurs Died,” about his visit with paleontologist Robert DePalma into his Hell Creek geological formation site in North Dakota. DePalma had made a number of amazing discoveries, one of which was that the specimens he uncovered were upright and intact, not flattened or distorted as most specimens become over time. Their burial indicated a sort of flash-fossilization, coinciding with the 66-million-year-old impact of the asteroid called Chixulub after the site of its impact on the Yucatán peninsula; the big bang that put paid to the dinosaurs and most everything else living in the Cretaceous.

This unimaginable impact and near instantaneous destruction of life created what is known as the KT line, the demarcation between the dinosaurs and the rest of the ensuing 66 million years. (K stands for “Cretaceous,” T “Tertiary,” now “Paleogene,”) Below KT there be dinosaurs; above, none.

Competing with Chixulub is the Deccan theory, asserting that dinosaurs faded over hundreds of thousands of years through worldwide volcanic eruptions. Perhaps so, or by some combination. Personally, I’m drawn to that long, gray KT line of compressed dinosaurs: one door banged shut, opening the next—eventually—for humans. If DePalma is right, tens of millions of inner seas went dry in minutes, not hundreds of thousands of years of attrition. What a massive ebbing and flowing was checked when the lights went out. Or, rather, on, in a global burning, blazing hotter than the sun.

I only had so much time that day to drift on my inland sea, and the Barwoorsh of my personal A-positive tributaries was a reminder that all blooded creatures, Winston Churchill to T-Rex, rose from Earth’s oceans and our lives, while they last, continue to echo their ebb and flow.