A Word In Edgewise: Keep Reinventing that Wheel 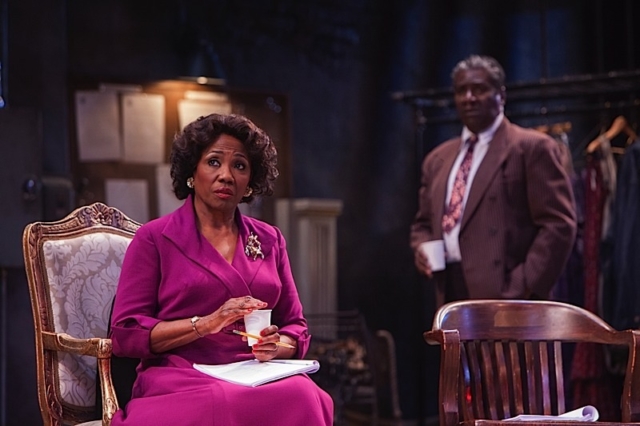 The cast, even the stage veterans Wiletta Mayer and Sheldon Forrester (played by Margo Moorer and Cleavant Derricks) are resigned to their stereotyped bits, Wiletta mumbling her “Yes’m”s, Sheldon whittlin’ a stick, until Wiletta is directed to “look inside” herself for motivation. Thus turns the course and tenor of both plays. Wiletta realizes her character, a sharecropper mother, would never turn her hunted son in for his “safety.” After this epiphany, although desperate for her first Broadway part, Wiletta balks, unable to utter her blatantly false lines. She refuses to go on, at least at curtainfall.

I’d like to be able to say that Trouble, for all its power, was simply an interesting, dated piece. But it’s not, other than that it was written over half a century ago. Blacks voting? Yes, but many whites are working today to keep blacks (and others they deem undesirable) from voting this November. Childress herself? Her work? Born black in 1916 (or ’20), how unremarkable is it that she is not better known or represented? Suppose the white authors of the hackneyed Chaos in Belleville had penned Trouble in Mind?

Race hierarchy is still set fast. As we look to this year’s Pride celebrations, we’d do well to remember that for all the strides made for various letters of the rainbow alphabet, equality — and safety — are not uniformly assured.

The great Trans Bathroom Wars are being promulgated not only as a smokescreen for greater problems, but, I cannot help but believe, to mask ill-treatment of all GLBTs, lesbians in particular. Do haters suddenly and honestly believe every young woman in a pixie cut in the ladies’ loo is transgender and intent on rape? I’ll wager haters now see a free pass to harass perceived lesbians, and I’ll double that by betting they wouldn’t recognize most transgender individuals anywhere.

Celebrate this June, but consider that there is much more to come before it’s over; ask those who’ve lived through the 61 years since Trouble in Mind debuted.