A Word In Edgewise: It’s Not Going to Stop. So? 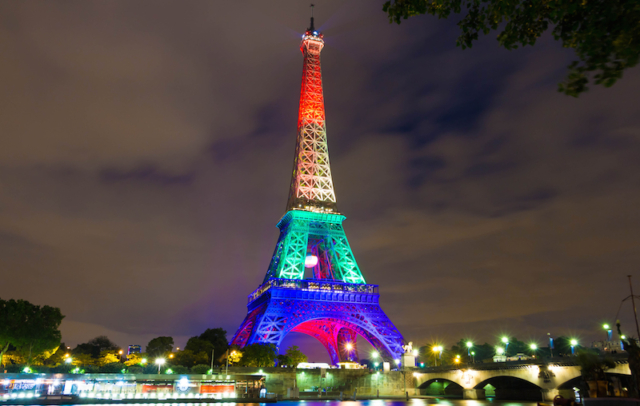 The Eiffel tower lit up in colors of the rainbow flag after the Orlando terror attack. BigStockPhoto.com

The Eiffel tower lit up in colors of the rainbow flag after the Orlando terror attack.
BigStockPhoto.com

My thoughts have been swirling since Orlando, but I’ve come to one conclusion: Hatred is not going to stop. Not toward blacks, women, Jews, other religions and cultures; and not toward gays, lesbians, and transgender individuals.

In fact, the more inclusive much of the nation becomes, the more fiercely and violently will the fundamentalist minority fight against their own perceived persecution. What persecution you ask? That they don’t get it all. They are infuriated to see those they’ve considered others now taking a place at ‘their’ table from which they were formerly able to exclude them.

While some insist Orlando massacre is the act of a religious terrorist, more information is painting the perpetrator as angry, self-hating; perhaps twisted by his fundamentalist Islamic upbringing, just as the horrific acts of the Roofs and McVeighs can be seen as the fruits of Christian fundamentalist hatred. McVeigh went to his execution unblinking, unrepentant.

The more women demonstrate competence, the more pronounced the backlash against them as well. Suddenly, in 2014, women comprised 56 percent of the nation’s college undergraduates, and now they’re frequent targets of fellow male students. The recent sexual violation of an unconscious young woman netted the perpetrator a mere three months in jail as his dad pronounced the punishment too harsh for “twenty minutes of action.”

But there is change, and it is not small or unimportant. When the UpStairs Lounge in New Orleans was torched June 24, 1973, there were 32 deaths. News coverage was limited, and after a local Episcopal church held a small prayer service, they received hate mail and a rebuke from the Episcopal bishop of New Orleans.

The reaction to the Orlando massacre was explosive and worldwide; the Eiffel tower and other icons blazed in rainbow colors while hundreds (homosexuals excluded) lined up to give blood. There were also the inevitable hateful responses, but the pastor of Sacramento’s Verity Baptist Church, praying for the demise of the hospitalized, was told in no uncertain terms that his church’s lease will not be renewed.

So? The answer is to stand up; be seen; keep taking your place at the table. Times are changing, and those of us in any minority must continue to help not only our rainbow selves, but all others along the human spectrum.