A Word In Edgewise: Have You Been Carefully Taught? 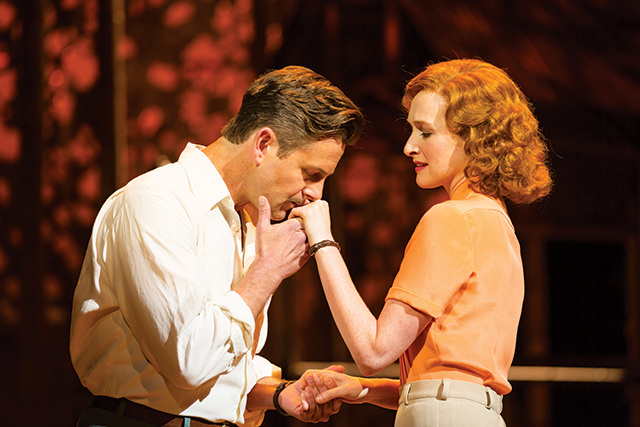 After serving in the Navy in the South Pacific, James A. Michener’s short stories were published in 1947 as Tales from the South Pacific. Rogers and Hammerstein (and Joshua Logan) created South Pacific in 1949, the year president Truman’s Executive Order 9981 abolished discrimination in the army. It was a bold move in a still-unsettled time for Rogers and Hammerstein to insist their musical present the harsh realities of discrimination through dialogue and lyrics:

Two years earlier, in 1947, the Partition of India had created, through unspeakable brutality and upheaval, the Dominion of Pakistan, a moment pivotal for the family of Amir, the protagonist of Ayad Akhtar’s Disgraced, running concurrently with South Pacific.

The lavish musical, directed by Joseph Haj, Guthrie artistic director, takes place during WWII; teeming with people, swaying palms, vast seas, and a wealth of music, “Bali Ha’i” among its most evocative. Disgraced is far more claustrophobic, confined within the walls of an (admittedly luxe) apartment on Manhattan’s Upper East Side, some 70 years later.

Yet the characters of both dramas live in times of personal confusion and world upheaval. Sailors and islanders face literal life-or-death situations, the Manhattanites walk the edge of an abyss of financial ruin, loss of identity, and discrimination. The principals discover their limits; Ensign Nellie Forbush recoils learning that two charming, mixed-race children are the offspring of her fiancé and his Polynesian consort.

Lawyer Amir, who has claimed to be Indian was born Pakistani; Emily, his white artist wife, is immersed in creating Muslim themes but unable to fully embrace an alien culture. Jewish art dealer Isaac had a one-nighter with Emily, revealed now to his black lawyer wife, Jory, who has been promoted over Amir. These fine cracks fracture over what was to be a celebratory dinner, erupting in an act of violence more explicit than any in the musical.

Director Haj commented: “By putting these two vaunted scripts in conversation with each other — the searing play and the grand musical — my hope is that a vital question might be considered by all of us: from 1949 until today, how far have we actually come in the ways we view and talk about difference; differences of race, religion, and identity? While both of these productions at the core are wrestling with themes of cultural assimilation, they are also brilliantly entertaining.”