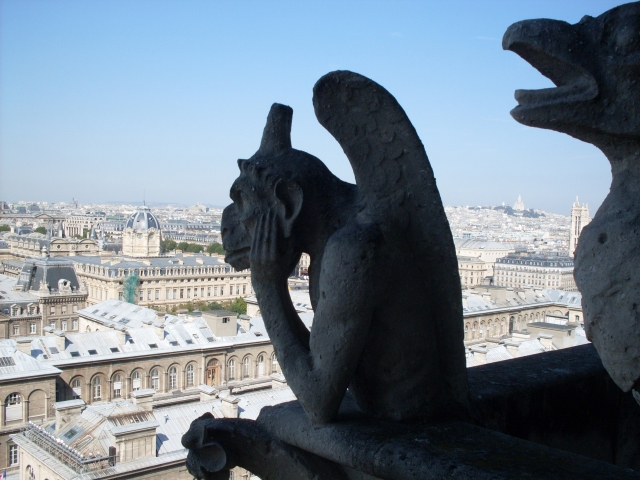 The Cathedral became a cause célèbre after Victor Hugo’s 1831 blockbuster, Notre-Dame de Paris (The Hunchback of Notre-Dame). Public pressure and impending physical dilapidation spurred action. By 1786, the magnificent flèche, constructed between 1220 and 1230, was so weakened it had been removed. Riot and revolution had destroyed ancient glass and statuary; could they be recreated? Should they be?

These myriad changes were detailed recently, post-April 15. Significant was Violette-le-Duc’s flat refusal of the Commission’s proposal for a new spire atop each tower. That addition, the architect declared, “would be remarkable but would not be Notre-Dame de Paris.”

He created a 295-foot flèche in lead-covered oak weighing 750 tons. Copper statues of the twelve apostles stood around its base, facing outward–except St. Thomas, patron saint of architects, whose face resembled Violette-le-Duc’s. Thomas faced inward, towards the spire.

Violette-le-Duc, didn’t have today’s technology, but the necessary human elements are unchanged: passion for the work, consuming attention to detail, sheer doggedness to finish the job. Such a modern man was Andrew Tallon, architectural historian, and Vassar art professor, who also combined precision with love of the medieval. Violette-le Duc had too few guidelines, Tallon had too many.

“When you’re working on medieval buildings” Tallon explained in 2105, “it’s difficult to have the impression you can say anything new. They’ve been looked at and written about for ages, so I’ve been using more sophisticated technology these days to try to get new answers from the buildings.”

In 2010, Tallon and Columbia professor Paul Blear set up a Leica ScanStation C10 in Notre-Dame and scanned over five days, putting up markers, repositioning the scanner some 50 times, they recorded Notre-Dame as a series of one-billion data points in space. A terabyte of information Violette-le-Duc could have held in his palm.

Tallon died Nov. 16, 2018. He fought brain cancer, even as he inched cross the cathedral roof, probing nooks and crannies, his intellect and passion intact, a part of the living web of Notre-Dame.

These two, whose names we know, are but links in a chain. The cathedral’s first, anonymous architect, the unknown, highly-skilled stonemasons, carpenters, glaziers, bell-casters, worked knowing they would never see the goal, nor would those sons who followed in their trades. For God? For some; and for faith in man’s reach, to touch lives yet unborn.

“To restore a building,” wrote Violette-le-Duc, “is not to maintain it, repair it or remake it: it is to re-establish it in a complete state which may never have existed at any given moment.” The ancient Paris motto, “Fluctuat nec Mergitur,” means “Wave-tossed, but does not founder.” Notre-Dame lives.