A Word in Edgewise: A Profile In Courage 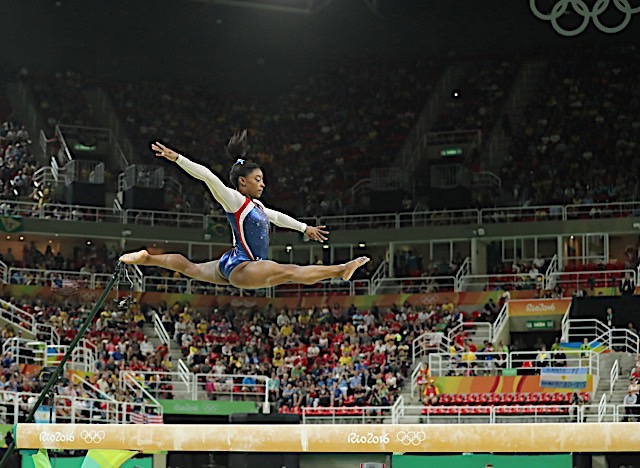 Simone Biles pulling out of scheduled exercises was not “letting down” her team, as some critics asserted. It would, in fact, have been pure hubris to have assumed that she alone could assure their win, and a great folly to risk grievous personal injury in attempting to “push through.” Biles knew from her first wobbly landing that her mind and body were not in sync.

Criticisms from some (mostly male) individuals in the media and armchair pundits were aimed at an athlete already in possession of some-32 Olympic and World Championship medals, and an entelechy that refused to allow her to endanger herself or cost her team a possibility to medal.

Steadfast, Biles remained on the floor, fetching chalk, cheering her team to a Silver, and 18-year-old Hmong-American Sunisa “Suni” Lee to a Gold in the women’s all-around finals (a medal Biles won in 2016.) She explained to critics the impossibility of using a replacement, reminding them that the rules are set for a team of four, of which only three need perform any given exercise; they had those three. By withdrawing, Biles wisely protected herself and opened the way for others.

In 1978, Russian gymnast Elena Mukhina, 20, was pressured into continuing her Olympic training on an ill-healed broken leg, and was required to perform a dangerous Thomas Salto move. She landed on her chin, remaining a quadriplegic until her death at 46. American Kerri Strug became famous in the 1996 Atlanta Games for “pushing through” and landing a one-legged vault after having torn two ligaments and spraining an ankle in her first attempt. “I can’t feel my leg,” she told coach Béla Károlyi, but he persisted. A televised close-up revealed the young woman’s terror and anguish. At what cost is victory, when you collapse and your coach must carry you, damaged leg hastily bandaged, onto the podium to accept the Gold with your team, a Gold your team was far enough ahead to win without your sacrifice. Strug never again competed.

At 24, Biles has won all the medals and performed at more rarified levels than any other woman and many men gymnasts. She knows when her mind and muscles are out of sync; it’s not a place you want to be, 10 or 15 feet in the air, not knowing up from down. Far braver to say, “No,” to protect yourself, than become permanently damaged, to perhaps die, trying to satisfy the insatiable appetite of couch-critics and the media.

Praise and thanks poured in. Among them, 23-Gold-medalist swimmer Michael Phelps, former First Lady Michelle Obama,  and even Kerri Strug—now 43.

Biles’s voice admitting publicly to mental health issues and the burdens of pressure were heard and will spread ripple effects greater than she can see at this moment. Biles told one interviewer: “This Olympic Games, I wanted it to be for myself, but I was still doing it for other people. It hurts my heart that doing what I love has kind of been taken away from me to please other people.”

Later, responding to the deluge of support and praise she’d received, Biles marveled, “The outpouring of love and support I’ve received has made me realize I’m more than my accomplishments and gymnastics, which I never believed before.”