A Movie about Moving from No to Yes

Michael McIntee is Executive Producer for the newssite The UpTake, which is developing a documentary on Minnesota’s journey to marriage equality (the film’s title is TBA). The UpTake is crowd-sourcing funding it needs to finish production through the fundraising site Kickstarter. Deadline for contributions is September 6.

Michael:The UpTake was founded in 2007 with a few simple ideas that we continue to pursue. That media should find and tell the truth without fear or favor; that citizens have the tools to report and explain events without relying on news controlled by large corporations; and that it is the duty of citizens to hold power accountable and to make government transparent to the governed. 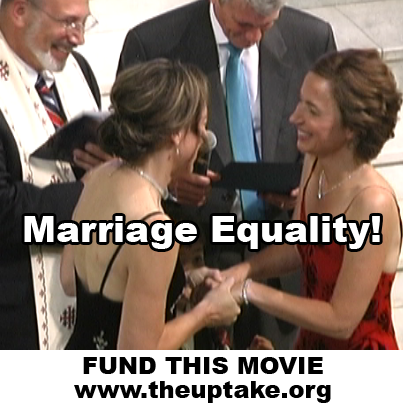 J: Why was it important for you to make a documentary about moving to marriage equality?

M: When history happens before your eyes like this, we knew this story needed to be told in a documentary. People who are pledging their support to our Kickstarter fundraiser are telling me it’s important to make this movie not only because they are proud of what Minnesota did, but also because they want to inspire other states to step up and end all discrimination. I couldn’t agree with them more.

J: Have there been any particularly moving moments for you during filming?

M:This is a movie with so many moving moments because it’s about love as a basic human right. Here are three of my favorites. I was overwhelmed by the joy I saw in people’s faces and heard in their voices when the Minnesota legislature passed the marriage equality law. Celebration broke out in the Senate chamber and all over the Capitol. I still get chills when I watch that video clip: http://www.youtube.com/watch?v=NcmMxaqq7Rw

That’s in stark contrast to the muted applause Rep. Steve Simon got when he asked how many gays must God create before he wants them around. It’s hard to believe that was just two years ago. That video clip ignited a huge reaction and put Rep. Simon on all the network talk shows: http://www.youtube.com/watchv=hXpOA3jPC04

Then just before Governor Dayton signed the law, a mother of a gay son told me she just wanted to dance at her son’s wedding, I teared up: http:// www.youtube.com/watch?v=Ev7dhw9sI8s

M: With Kickstarter it’s an “all or nothing” funding proposition. People pledge money to reach our goal of $21,211. In return we pledge to give them rewards such as a copy of the DVD, a t-shirt or even put their wedding photo in the movie credits. If we reach or exceed that goal in pledges by 11:59pm on Friday Sept. 5, we get the money to make the movie and people get their rewards. If we don’t make the goal, nobody’s credit card is charged for the donation, no rewards go out and the movie doesn’t get made.

J: Where can we learn more about The UpTake?

M: Our website is at www.theuptake.org If you like our Facebook page you can get the latest on what we’re doing (www.facebook.com/theuptake) and our YouTube channel (which has nearly 24 million views) is at www.youtube.com/theuptake