Thirty years ago this month, two San Francisco men, fed up with government inaction as AIDS decimated the gay community, chained themselves to a federal building within sight of City Hall.

Their act of civil disobedience would inspire countless other activists to join them, and later, local political leaders. The demonstration, which became known as the ARC/AIDS Vigil (ARC standing for AIDS Related Complex), lasted a decade and was the city’s longest-running protest. 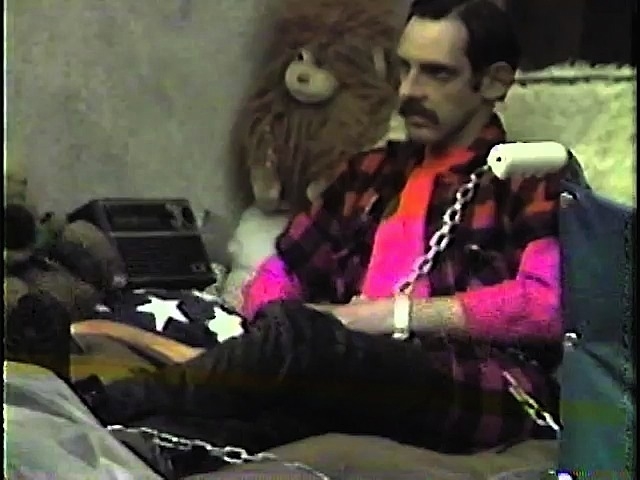 AIDS Vigil participant Bucky Stewart chained himself to the door of the federal building in this image from December 1985. Photo: Nick Aquilino.

It started on Oct. 27, 1985 when Steve Russell and Frank Bert, who were both HIV-positive, handcuffed themselves to the doors of 50 United Nations Plaza, a federal building in the city’s Civic Center district. Soon, a core group of volunteers joined them to keep vigil 24 hours a day, seven days a week.

A tent kitchen was set up, staffed by volunteers, to feed the protesters, who took turns sleeping on mattresses and tents in front of the building. Over time, the vigil turned into a place where people, whether living with AIDS themselves or struggling to care for or grieve for a loved one, could find camaraderie and comfort.

“When I am out here talking to people about my condition, about my health, it helps me. It helps me to talk to them because I was there. My family disowned me since I came down with AIDS,” Wes North, who married Bucky Stewart at the vigil in December 1985, told a television news reporter at the time. “My family has not wanted to have anything to do with me since I came down with AIDS.”

According to archival materials about the vigil, the demonstrators listed six demands they wanted to see federal officials act on, including publicly recognizing AIDS and condemning AIDS-related discrimination. They also were calling for a “Manhattan Project”-type effort to find an AIDS cure.

“We need $500 million in federal money for research to find a cure for ARC/AIDS Related Complex,” read one flier handed out by vigil organizers. “We make a moral appeal to the American government to condemn AIDS hysteria and bigotry through education.”

Numerous politicians joined the vigil and were arrested, helping to revive the media’s waning interest in the demonstration. According to old news clippings, gay former San Francisco Supervisor Harry Britt and former Berkeley Mayor Loni Hancock, now a state senator, both were arrested after chaining themselves to the building. 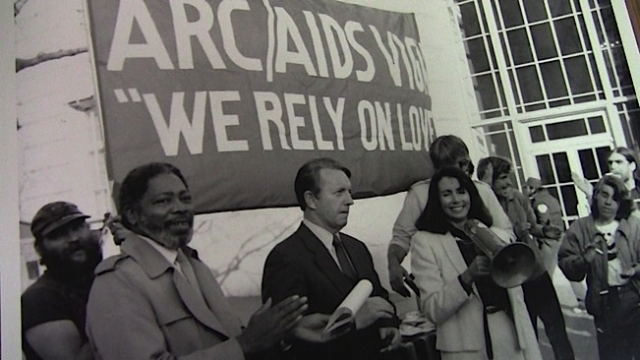 One flier advertised a “Breakfast with Nancy” at the vigil one February, referring to Congresswoman Nancy Pelosi (D-San Francisco), now the House minority leader. In the summer of 1987, two years into the vigil, Pelosi entered Congress and her main objective at the time was to demand action on AIDS.

It was also a site to collect the names of those lost to AIDS, several of whom died while taking part in the vigil. Both Russell and Bert died prior to the vigil’s end, said several participants.

In November 1985, the annual candlelight march honoring former Supervisor Harvey Milk, the first gay person to win elective office in San Francisco, and former Mayor George Moscone, both of whom were assassinated in City Hall in 1978, ended at the federal building, where marchers attached placards bearing the names of those lost to AIDS on the facade.

Longtime gay-rights activist Cleve Jones, who helped organize the march, conceived of the AIDS quilt that night, according to a history of the national HIV memorial, as “the wall of names looked like a patchwork quilt.”

More than just an encampment for demonstrators, the vigil also served as a clearinghouse for people to learn the latest news about AIDS. The volunteers also used bleach to clean injection drug users’ needles and passed out condoms.

“It was an educational experience for me, from the out-of-towners and those from other countries stopping by and thanking us for what we were doing, saying they were not even mentioning AIDS in their state/country, to the times I had to console someone whose partner was suffering from dementia,” said Terrrie Frye.

Starting in 1987, Frye spent three years working as an AIDS Vigil volunteer, after she happened to ride her bicycle through U.N Plaza and noticed the “mess tent.”

“I was not HIV-positive, and only HIV-positive folks could be members of the vigil, but I wanted to cook for them, and they had a rule that only members were allowed in the mess tent, so they made me an honorary member,” recalled Frye.

The outdoor protest came to an end 10 years after it started, when a severe rainstorm blew away the tent encampment. Just three demonstrators remained at that point, according to media accounts in December 1995.

Since then, the AIDS Vigil has been mostly forgotten to the history books and the fading recollections of participants. During the 25th anniversary of the protest, Frye created an exhibit about it that she displayed during the city’s 2010 Pride festival.

Four years ago, an effort was launched to erect a plaque or monument at the location in order to commemorate the protest and its participants, but nothing has come of it.

And a local filmmaker — who as a graduate student in San Francisco State University’s broadcasting program in the mid-1980s was part of a small crew who interviewed several vigil participants — had tried to pull together a documentary in time to screen on Oct. 27, 2015 to mark the 30th anniversary of the start of the vigil.

But he has struggled to line up financing to make the film, titled “Not With Standing,” and is unsure if it will ever get made.

“The reaction is always, ‘There is no AIDS crisis anymore.’ Nobody cares about AIDS,” said Nick Aquilino, 61, who is gay and HIV-positive and now lives in Sausalito.

With another film about the 1969 Stonewall protests held over two nights by patrons of the New York City bar released this fall, Aquilino remains dumbfounded as to why the years-long demonstration in San Francisco fails to spark similar interest.

“The thing that sticks out for me is these guys were so determined to gain some kind of acceptance for a disease they didn’t cause,” said Aquilino. “Thirty years ago, this kind of thing wasn’t very common. They weren’t on the street for weeks; they weren’t like the Occupy people and done with their protest and said, ‘Let’s go back to our normal lives.’ These guys who were living there; they were there for 10 years.”

To see archival footage about the AIDS Vigil and interviews with several participants, visit the website for Aquilino’s documentary at http://notwithstandingfilm.com/.

Matthew S. Bajko is an assistant editor at the Bay Area Reporter. He can be reached at [email protected].