Research. Education. Clinical practice. Public policy and advocacy. All four components of the Program in Human Sexuality (PHS) at the University of Minnesota have earned PHS its current level of national and international acclaim. Nearing half a century of existence, PHS continues to expand its influence in the broader sexual health conversation. 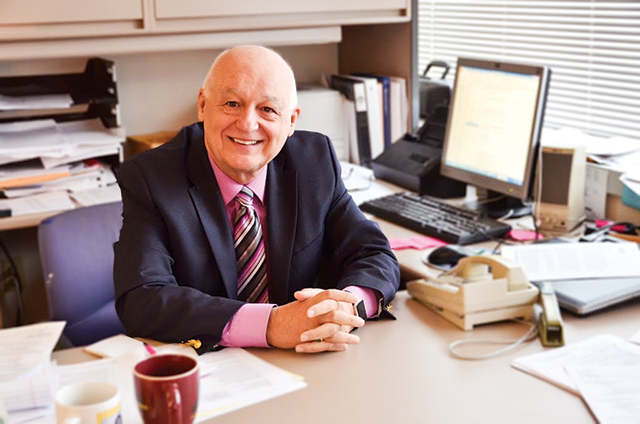 In 2007, Eli Coleman, Ph.D., was appointed the first endowed Chair in Sexual Health at the University of Minnesota Medical School. Photo courtesy of PHS

PHS has a long history in the local GLBT community. Some of the first transgender health services in the nation started at the University of Minnesota in the 1970s. Perhaps PHS’ greatest claim to fame during that time period was creating a program called the SARs (Sexual Attitude Reassessment Seminars). This was, essentially, a 2-day intensive workshop for participants that included clergy, laypeople, health care providers, and the general public, that consisted of an over-saturation of sexually explicit images and videos in order to desensitize folks to sexual practices to develop a comfort and non-judgmental attitude toward people with various identities, behaviors, and practices.

During SARs, people broke into small groups for discussions and reflection in order to become better advocates in the area of sexual health for their patients, their congregation, or themselves. This was some of the first exposure to GLBT culture for many heterosexual people, and allowed for honest discussions of stereotypes about GLBT sexual practice. The SAR process spawned similar interventions that focused specifically on people with physical disabilities, individuals dealing with chemical dependency, and then HIV prevention programs for men who have sex with men (MSM), and transgender persons.

Beyond the program’s work in Minnesota, PHS is recognized as a national and international leader in the academic research area of sexual and gender health. “We have always been committed to working with the community to address community health issues pertaining to sexuality,” says PHS Director and Chair in Sexual Health Eli Coleman, Ph.D. “Currently, we are working with OutFront MN, Rainbow Health Initiative, Minnesota Transgender Health Coalition, RARE Productions, and many other local groups in order to exchange resources and share our knowledge.”

Since the 1970s, PHS has been growing and evolving with the community. The close link with local GLBT-identifying people has allowed PHS to serve the community.

“Our faculty have such a strong dedication to their patients and the research being done to improve sexual and gender health,” Coleman says. “We understand the wide and diverse spectrum of people’s lives from genderqueer, asexual, kink and poly relationships, straight-identified men who have sex with other men, pain during sex, children and adolescents with shifting and creative genders, people at risk for sexual offending, anxiety or concerns around sexual orientation, coming out issues, LGBT parenting, and all the other ways that LGBT folks create and recreate their lives.”

The research that PHS does can have implications for future treatment and care for people in the GLBT community. More research is being done across the world in the areas of GLBT health, but how is that research being translated into real answers to health issues in the community? Coleman says, “Our research directly informs our treatment models for our patients, and we are more able to effectively treat all sorts of issues that may arise. This ability to be flexible to the shifting needs of our local LGBT community makes us an important asset to Minnesota.”

Education
Being tied to the university’s medical school also gives PHS a chance to influence the health care providers of tomorrow, educating all incoming University of Minnesota medical students with a required course in human sexuality.

Being part of the University of Minnesota Medical School allows PHS wonderful access to educating incoming medical students and other professionals. According to Coleman, the head of the Department of Family Medicine and Community Health, Macaran Baird, MD, MS, as well as the dean of the medical school, Brooks Jackson, MD, MBA, are strong supporters of the Program in Human Sexuality and recognize PHS as an important asset to the University of Minnesota.

“Being part of an academic institution also has some drawbacks; things sometimes take a bit longer in order to go through all the proper channels but that is a good safeguard of checks and balances,” Coleman says. “Overall, we are incredibly happy to be part of such a wonderful research, education, and clinically focused institution as the University of Minnesota.”

Clinical Practice
In its mission to help people become more sexually healthy, the clinic at PHS, the Center for Sexual Health, has nearly 11,000 patient visits a year.

PHS’ research component is widely known across academic institutions, with the research and academic work being shared with other universities and institutions across America and the globe as faculty publishes research findings in peer reviewed journals all over the world. Though the clinic treats people in the local area, PHS is very public about its status in the global conversation of sexual health while remaining somewhat unknown locally.

“Many people who are patients here at the Center for Sexual Health may be reluctant to share this part of their lives with their family and friends,” Coleman says, “because treatment for sexual or gender health related issues is still stigmatized. This may be the reason that our clinic and program are not more widely known here in Minnesota.”

Public Policy and Advocacy
PHS faculty are also advocates on the local level for sexual and gender rights with the Minnesota Transgender Insurance Task Force, and the issue of civil commitment for sex offenders in Minnesota.

Coleman says, “Our faculty are active in public policy with leadership and participation in the international areas of sexual health: World Health Organization, the World Association for Sexual Health, the World Professional Association for Transgender Health, and the issues of transgender service in the military.”

According to Coleman, this advocacy is a much-needed aspect of the work PHS does. He says, “We are still revolutionizing the sexual climate in America, because healthcare providers often do not know how to talk about sexual health or gender identity issues with their patients. Our work is clearly still needed. When was the last time your doctor asked you about your sexual health?”

“We need to continue to bring scientifically accurate knowledge of sexual health to providers and offer ways to discuss those findings with their patients,” he continues. “PHS is entering a phase of growth and we are looking forward to all the ways that we can expand our research knowledge and effect real change with our policy work in the years to come.”