2012 Lavender Yellow Pages: About the Organization 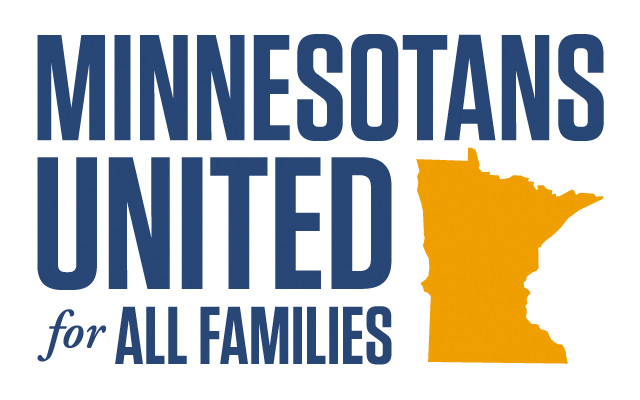 At midnight on May 21, 2011, the final legislative vote was taken in St. Paul to place a question on the 2012 general election ballot in Minnesota: Shall the Minnesota Constitution be amended to provide that only a union of one man and one woman shall be valid or recognized as a marriage in Minnesota? As we stood under the Capitol rotunda with hundreds of other supporters who had been waiting all night for this vote, a wave of despair washed over us. And then Senator Scott Dibble and Representative Karen Clark came out to reassure us – we’ve just begun to fight.

An hour following that vote, Minnesotans United for All Families, the official campaign to oppose the ballot measure, was launched.

We are a broad coalition of organizations and community and business leaders working to defeat the proposed constitutional amendment, which would ban marriage for same-sex couples in Minnesota. Faith, labor, progressive, and nonpartisan organizations; communities of color; current and former elected officials; Republicans, DFLers, Greens, Independents, and Libertarians have all joined to defeat this amendment.

We are a coalition founded on a strong belief in the power of marriage. We believe marriage and family are about love and commitment, working together, bettering the community, raising children, and growing old together. We believe in a Minnesota that values and supports strong families and creates a welcoming environment for all Minnesota families to thrive. And we believe marriage matters. To all.

Twenty-nine other states have amendments banning marriage for same-sex couples in their constitutions. Minnesota has the opportunity to be the very first state to defeat this kind of amendment, and make history.

In the months leading up to this historic vote on November 6, 2012, we will host a conversation with Minnesotans to talk about why marriage matters. We will be launching the largest grassroots campaign Minnesota has ever seen, using innovate persuasion techniques and specific messaging strategies that we’ve garnered from the unfortunate history of the losses that have come before us.

Minnesotans will go the polls with many decisions to make. Our coalition’s goals are simple:

In order for our coalition and this campaign to be successful, we must come together and accomplish many goals. We will need thousands of volunteers and financial donors, and even more voters who are committed to voting NO on this anti-marriage, anti-family amendment.

You know what’s at stake: a change to our State Constitution that will last for generations, and would tell thousands of Minnesota families that their family doesn’t count. This amendment must be beat. Winning will not be easy. We must work harder than we’ve ever worked before. We must be smarter, more strategic and insightful in order to maximize each and every scarce resource. But we can win. We won’t be the thirtieth state to add this amendment to our constitution. We will be the first state to defeat it.

You can take action today. By joining our campaign as a financial contributor, volunteer or simply committing to Vote No, you will make a difference. By visiting mnunited.org, you can be a part of this winning effort.

As Minnesotans United Board member and life-long Republican Wheelock Whitney recently stated in a Star Tribune editorial, “Many things can undermine a marriage. But my happiness has never depended on depriving others of their happiness.”

We couldn’t agree more. And, we look forward to celebrating this victory with you and all Minnesota families next fall.

Thank you to all of our wonderful volunteers, our board of directors and our coalition partners for helping us get to this level of success in such a short time. We could not do it without you.