2012 HRC Gala Dinner: Our People Working for All of Us 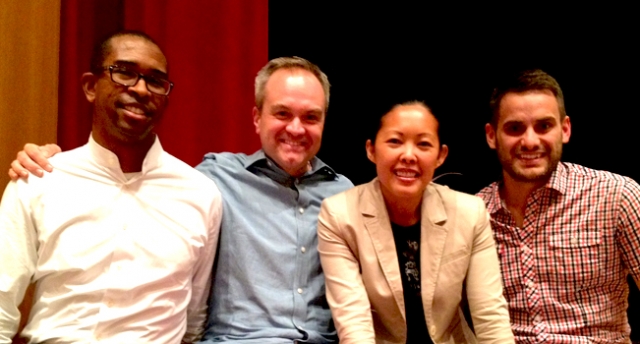 It’s time for the annual Human Rights Campaign Gala Dinner here in the Twin Cities.  Happening this Saturday, September 8, it’s the social affair of the season.  Last year, we enjoyed the wit and banter of Ross Mathews.  This year, the dinner will feature special guest speakers: T.R. Knight, a Minneapolis native and Guthrie Theater alum, who is best known for his role on Grey’s Anatomy; U.S. Senators Al Franken and Amy Klobuchar; U.S. Congressman Keith Ellison; and HRC President Chad Griffin.  At this event, we have the opportunity to hear from national and state leaders about what we need to do as members (or potential members) of the Human Rights Campaign–but here’s our opportunity to hear from the event coordinators and HRC leadership here in the Twin Cities: Arouna Phommasouvanh (2012 Twin Cities HRC Dinner Co-Chair), Corey Smith (2012 Twin Cities HRC Dinner Co-Chair, Twin Cities HRC Board of Governors), Philip Kelley (HRC Web/Communications Chair), and DyShaun Muhammad (Twin Cities HRC Steering Committee Co-Chair, National HRC Board of Governors, Twin Cities HRC Corporate Outreach Committee Chair).  They’re our people, working for all of us.

Andy Lien: Each year the Twin Cities HRC holds a Gala Dinner.  What happens at this event and what are you looking forward to this year?

Arouna: One of the most wonderful things I’m looking forward to at the 2012 dinner is seeing the incredible number of straight allies in our audience.  They are our mothers and fathers, aunts and uncles…brothers and sisters, neighbors, co-workers, and friends.  Some have long supported our cause and some may have just come to the realization that equality belongs to all; many for the first time will literally stand beside us, the LGBT community, on the night of the dinner.

With the anti-marriage amendment vote coming up in November, we felt this was an opportunity to reach out beyond the “usual suspects”.  For the LGBT community, our straight allies are some of our most powerful advocates.  Our Dinner Volunteer Committee itself has many new faces this year and a good number of them are straight.  This shift in demographics has been incredible to see.

Above all, I am most proud and blessed to share this event not only with my partner but also with my family, who have been my long-time allies.  Watching Mom shake her booty at the after-party most certainly is going to be one of my highlights.

Philip:  The dinner is a time for us to celebrate the success we’ve had in the past year. Thanking the allies who have supported us along the way, and recognizing the new ones. While the event is a celebration, it’s also an opportunity for us to look forward to the hurdles on the horizon and the efforts we will make to overcome them.

Beyond the above – it’s also just a great opportunity for our community to come together and connect with the business leaders and legislators who can make a real difference in our fight for equality.

I’m most looking forward to hearing the new HRC President, Chad Griffin, speak about the importance of winning the anti marriage amendment battle in Minnesota.

DyShaun: Our annual dinner has become a keystone tradition here in the Twin Cities that brings together leaders in the business, political and advocacy sectors to raise money and awareness for the issues of LGBT equality both here in Minnesota and around the nation.  This is our 23rd annual event and we are expecting a sell-out crowd of over 1000 guests. Each year, we aim to inform, entertain and inspire those in attendance to get involved in the fight for equal rights. I always leave our dinner saying to myself “I have to do more – there is so much work left to do,” and feeling re-energized to do so.

This year, we are shining the spotlight on the fight against the anti-marriage amendment on the ballot. Across the community, people are fired up this year to defeat the amendment and we are seeing amazing responses coming from individuals and businesses looking to support the event. We see the dinner playing a key role in helping people understand what is happening, how HRC and the rest of the Minnesotans United for All Families campaign coalition is working to win, and how to get involved with their money, their voice and their time.  We will also engage people with the work HRC is doing across the nation to support school safety, make workplaces equal for LGBT workers, fight employment discrimination and more.

Andy:  Who will be the featured speaker at this year’s Gala?  What can you tell us about this person?

DyShaun:   Our new President for HRC, Chad Griffin, will be addressing his first Twin Cities dinner. We are all excited to welcome him. He is a fighter with a powerful track record of success taking on the far right and well-funded adversaries. As successful as HRC has been, we are miniscule in resources compared to those who work daily to marginalize us. Chad’s experience working across numerous high-stakes issues will help us be more innovative and smarter as an organization in executing strategies and building coalitions that can win in the fight for equality.

Andy: What are the primary objectives of the HRC in the Twin Cities?

Corey: As a national organization, HRC works to achieve equality for lesbian, gay, bisexual and transgender individuals. Our responsibility, as the local leaders of HRC, is to translate that work into serving the needs of the Twin Cities LGBT community. HRC is able to channel some pretty amazing resources- be it full-time staff or financial support- toward areas of the country in the most need, which is happening right now in the fight to defeat the anti-marriage amendment here in Minnesota. We have to lay the local groundwork and build relationships year-round with our state and national elected officials, as well as our rock-solid coalition partners at OutFront MN, Project 515 and this year, Minnesotans United for All Families. Those relationships are critical in moving equality forward in Minnesota, but they also make the Human Rights Campaign a stronger organization nationally.

DyShaun:  This year, our number one objective is beating the constitutional amendment that would block same-sex couples from being able to marry in Minnesota. Every meeting of our volunteer leadership team starts with a focus on the work HRC is doing with the Minnesotans United for All Families campaign. HRC has been a lead partner on the MN United coalition from day one providing significant financial, human and strategic resources to help the Vote No campaign succeed. We now have several full-time staff, funded by HRC, working exclusively on the MN United campaign team and we just announced a $250,000 direct investment in the Minnesota campaign. This is on top of significant amounts of money we have raised locally through a Minnesota PAC we established to go 100% in support of the “Vote No” campaign.  We’ve been organizing phone banks, house parties, and will be doing outreach at the dinner to get more volunteers involved.

Beyond the amendment fight, we are focused on building broader coalitions. Earlier this summer, we piloted the “Ya Es Hora” program here in the Minneapolis. Working with several local immigrant service organizations, we organized and facilitated a day-long work-shop where people could get free training on how to obtain their U.S. Citizenship. HRC has been expanding this program across the country as a way to build bridges between the LGBT community and immigrant groups to foster understanding and build community.

These are just two examples of the types of things we are focused on here in Minnesota. Our local volunteer team is constantly working on multiple diverse initiatives and events to help build support for LGBT equality and get more people involved.

Andy: What is the “State of the HRC?”  What’s going on, what are you working on, what is in the future?

DyShaun:  I’ve been involved with HRC as a volunteer for over 15 years and I have never been more energized about what we can accomplish then I am now. In the last few years, HRC has been at the center of the effort to defeat Don’t Ask Don’t Tell, secure passage of the Matthew Shepard and James Byrd, Jr. Hate Crimes Prevention Act, and has been a key partner in winning marriage equality in New York. HRC has been funneling resources to the marriage fights in Minnesota, Maine, Maryland and Washington and sharing freely what we have learned from fighting these battles in so many states over the years.

Beyond the blockbuster stuff, HRC is working on the other things that matter in people’s daily lives. Through the HRC Corporate Equality Index, we have encouraged and supported companies like 3M, Best Buy and General Mills to put into place equal benefits for transgender employees. We have staff working across the country (including in Minnesota) on our “Welcoming Schools” initiative to make school a safe place for LGBTQ students and families. It is this track record of success and effectiveness that encourages me to give most of my volunteer time to HRC.

I’m personally working on continuing to build our relationships with the corporate community here as we find they can be powerful allies for equality when properly equipped and educated. We are also working to create new opportunities for people to get involved with HRC locally. While we are a national organization, we are fueled almost entirely by the efforts of volunteers in communities like the Twin-Cities.

Philip: I’m hopeful that there will be a great deal of celebrating after election day. We’ve been working very hard with our coalition partners (lead by MNUnited) to fight the anti marriage amendment and help people understand the real impact it has on families in our state.

DyShaun:  I believe we will win, if we stick together and do the work that needs to be done between now and Election Day. The coalition campaign is well organized and the strategy is sound – we just need people to keep having conversations, give as much as they can, and help us hold strong together as a community in the face of the nasty assault on our dignity that is coming.

After Election Day, regardless of the outcome, we will still have plenty of work to do. HRC is going to continue to be working with our partners to make our schools safer, our workplaces more equal and ensure LGBT people get equal treatment under the law. This amendment fight is a major battle, but not the deciding factor in the war. HRC will continue to work with our partners here in Minnesota to make the case for equality and win the hearts and minds of the community and our political leaders to help them do the right thing.