2011 Person of the Year – John Kriesel: A Profile in Courage 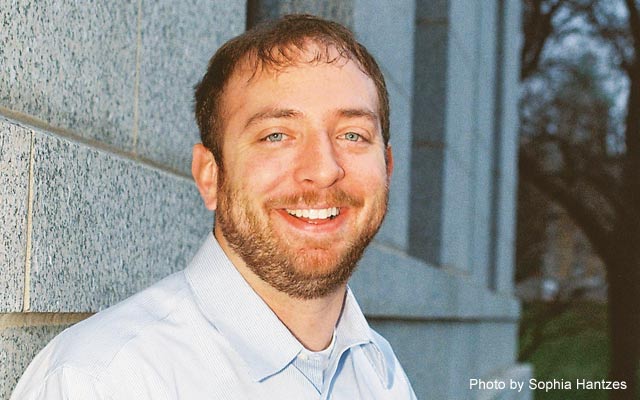 While serving courageously with the Minnesota National Guard in Iraq in 2006, John Kriesel lost both legs because of an IED (roadside bomb). Four years later he was elected to the Minnesota House of Representatives for District 57A, which includes parts of Dakota and Washington counties. That victory alone was enough to garner him headlines, but in May of this year he garnered national attention again. This was for speaking passionately and eloquently on the House floor (see video here), dissenting with the majority of his fellow Republicans who sent a constitutional amendment to ban same sex marriage to a 2012 referendum to be voted on by Minnesota’s electorate. Essentially, the Purple Heart medalist stood up to his own party’s push to put the right to discriminate up to popular vote.

This act of moral courage made the 30 year-old not a pariah, but a YouTube sensation across the nation. Though he’s still proud to be a Republican, Kriesel stands on principle first and the belief in every American’s right to the pursuit of happiness. He also wrote his autobiographical Still Standing with Jim Kosmo, and works as a private marketing and advertising contractor to the Minnesota National Guard, and as a contributor KFAN-AM 1130 radio.

I was privileged to speak with the Representative and Lavender‘s Person of the Year 2011 at his office in St. Paul.

JT: What compelled you to come out against the Minnesota amendment to ban same sex marriage?

JK: It’s just something I feel strongly about. It’s something I didn’t think a whole lot about until I ran for office. And towards the end, when we were nearing election day, I think it was an editorial board with the Star Tribune that had  brought up some social issues. And you get asked about abortion alot. You get asked about certain things alot. And same sex marriage wasn’t something that came up too much. But that, I believe, was the time it did come up and I came home and talked to my wife.

It’s not something I prepared for. I spoke from my heart and said I love my wife so much and I just don’t understand why anybody would want to take that away from somebody else.

I try to put myself in other people’s shoes. When I got elected, the way I thought, the way I looked at things changed. Not to mention, when I got hurt in Iraq, everything changed.  I realized that now I just wasn’t making decisions that affected my wife and my two sons. I had to (now) make decisions that reflect not only the best interests of the (approximately) 40,000 people in my district, but the greater good of the state.

At that time I didn’t know anybody that was gay. I didn’t have any gay friends. I’ve gained some now. But you have to put yourself in their situation. I would be so -not angry- as much, but just hurt, devastated, if the government said, you can be with your wife, but you can’t marry her. You can’t share that. I just don’t get it.

JT: Have you gotten flack from friends, colleagues, family, anybody else?

JK: Not colleagues. And I think that was prevented by coming out against it so early and saying this is where I’m at. I had one person come up to me on the floor and say ‘really would like you with us.’ And it wasn’t leadership or anything. It was one colleague who said we’d really love your support. And I said, you know where I’m at. Go sit down. And that’s that. That’s the only time. The Speaker knew where I was at, respected it, and that’s the thing. We can have a respectful debate about it. There are people that don’t agree with it. They want the amendment to pass. They want it to pass ultimately. And I disagree with them but I respect their position.

This issue I have is when there are people that don’t believe in this. They wanted to vote no but they were too scared and that’s tough for me. Coming from a military background, surrounded by people who do what’s right and what they believe in, no matter what cost. Up to, and including their life. And then you come to a situation where certain people are concerned about re-election or getting endorsed or whatever reasons there are and it influences the way they vote.

And I don’t wanna make this sound like that’s alot of people. It’s not. At all. So I guess as frustrating as that was, I was frustrated more in the people that I know (who) wanted to vote no and just didn’t. And that’s the part that bothers me because I’d like to think that I vote the way I believe and not based on what’s best for my career.

JT: What about your constituents’ reaction?

JK: I had a couple who said they’d not be supporting me. But if I could go back and do it all over again, I would do the same thing.

The core reason I am against (the amendment) is we shouldn’t be discriminating against a group of people. We should be way past that right now. But looking at it from another standpoint, doesn’t the government have better things to do right now? I mean this is already in statute. There are people concerned that it will be challenged in court and that’s what it is. People are saying let the people have their say. That’s what the bill’s author said on the House floor. That’s his compelling argument. Not once did he give a compelling reason wy it should be on the ballot beside ‘let the people have their say’. It’s just not true. Because, guess what -no matter if they say yes or no- it’s still gonna say that marriage is between a man and a woman. That’s the way it is right now. It doesn’t mean it can’t be changed down the road. So I think to market it that way is misleading. I’m a Republican because I think it’s the best vehicle for my view. Not because I blindly follow the party platform or I agree with everything they say. And I hope that’s the reason Democrats are Democrats.

But I think when we get into that just because it’s in the party platform, that’s the way we need to think -there’s some people like that- then we have some problems. But I just think it’s the contradiction of what Republicans preach and stand for. How many times a session did we hear ‘we need less government! We need government to stay out of our lives, out of our pockets, out of this, out of that.’ But there’s this one thing that it’s okay if government reaches into.

I get tired of the whole ‘protecting marriage’ thing. I am actually pretty confident that my marriage is just fine. So if Bob and Bill are a married couple and they move next door, they’re not going to affect my marriage. And if Jane and Sue are right next door on the other side, they’re not going to affect my marriage. That’s the beauty of America. Whatever makes you happy, as long as it’s not physically harming other people, have at it.

JT: The Republican Party historically has had some great Presidents who defended individual freedom and human dignity: Abraham Lincoln, Teddy Roosevelt, Dwight Eisenhower. You are of a younger generation that doesn’t have as much of a problem with gay people as older generations.

JK: I think that’s part of it. (But) like I said on the floor, if this had come up a few years ago and I was in office -and I wasn’t, but just guessing- I don’t know how I would have voted. I probably would have voted yes. But I guess it’s hard to say because I didn’t think about it like I think about it now.  So I would never know.

But times are just different and I’ve never had an issue with it. So it’s up to you, what you wanna do. I think that’s how other people should look at it. Does it really hurt you? No. Well then, let it be.

JT: Any advice for glbt friends, families, allies, etc. about how we can go about convincing people in an effective and dignified way? Not flying off the handle? I’ve already told some folks to watch their temper. Be rational and cool.

JK: What you’ve just said is probably the best advice anybody could give. Just stay calm and be respectful. It’s easy to be upset at the people that brought this forward. I was very upset at the people who brought this forward when it was on the floor. And that was tough for me. There’s times I get angry about things and this doesn’t personally affect me. So I couldn’t imagine being in a situation where this would affect my family. And so it’s hard for me to give advice to say, ‘listen, here’s what I would do if I were in your spot’ because I’m not.

But I would just say stay respectful, which is going to be the hardest thing to do because if someone was ripping on my family, I’d wanna tell ’em what I thought. But be calm and respectful. Kill ’em with kindness. That’s what works best in Minnesota. Kill ’em with kindness and showing that you know that we’re all the same, despite sexual preference. That’s something that’s private, so that should never be an issue. Besides that, we’re all the same.