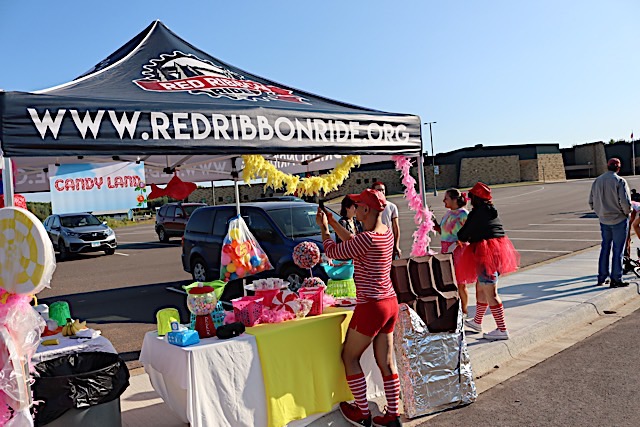 2022 marks the 20th anniversary of the Red Ribbon Ride. This year the ride will take place on Friday, August 19th, and Saturday, August 20th. Funds raised throughout the weekend will support The Aliveness Project, One Heartland, and Rural AIDS Action Network, all of which do invaluable work for Minnesotans with HIV/AIDS. I chatted with Angela Skelly, the Development and Communications Associate at The Aliveness Project, about what we can expect from the Red Ribbon Ride this year. As usual, it is not an event you will want to miss.

A Shorter Ride – A Longer Legacy

“Before the Red Ribbon Ride, there was another HIV/AIDS ride that went from the Twin Cities to Chicago,” says Skelly. That ride, which was called the Heartland AIDSRide, ran from 1996 to 2002 and raised over $15 million for HIV/AIDS organizations in those six years. Unfortunately, declining returns and participation led to its eventual shutdown.

Because Minnesotans like their bike rides almost as much as they like their fundraisers, a new, shorter ride was planned for the next year. “A group of people from a couple [of] different AIDS Service Organizations in the Twin Cities came together and formed Minnesota Fighting AIDS on Bikes, also known as the Red Ribbon Ride,” says Skelly.

At its inception, the Red Ribbon Ride spanned four days and 300 miles. The ride has been cut in half since then, now spanning two days and 150+ miles. Most importantly, Red Ribbon Ride delivers on the same mission: to raise money for HIV/AIDS service organizations and to keep HIV/AIDS in the public consciousness.

“[This] is a fully supported bike ride,” says Skelly, “There are 5 pit stops, including lunch, each day.  Each pit stop is about 10-15 miles apart, and has snacks, water, Gatorade, and restrooms for all participants (riders and crew) to use.”

The event takes good care of its riders, relentlessly ensuring that the weekend is fun and safe for everyone. Skelly continues: “There are sweep vehicles, driven by our all-volunteer crew, that will pick up riders if they get a flat tire, are not feeling well, or just need a little boost on the route to get to the next pit stop.”

Unsurprisingly, the decoration at the Red Ribbon Ride is often creative. “[O]ur pit stops have themes each day if [the crew chooses]. The volunteers at the pit stops dress up in costume and decorate their pit stops. It is fun for both Riders and Crew going into that pit stop to see what they come up with!” In previous years themes have included Candy Land and Lord of the Rings. You never know what kind of experiential treat you will roll into.

The ride starts at Camp Heartland on both days, so out-of-town riders generally keep the same accommodation both nights.“People can choose to pitch a tent in the field at camp, stay in one of the camper cabins, or stay in a hotel,” says Skelly.

There are plenty of ways to get involved with the Red Ribbon Ride. Whether you ride your bicycle, join the event as a crew member, donate, or just attend the event to cheer on the riders.

Signing up as a rider is easily done on the Red Ribbon Ride website. Riders are asked to fundraise a minimum of $1,500, so make sure to let your friends, family, (and maybe even your followers!) know that you will be riding. The ride also offers resources to help riders navigate fundraising.

The ride is designed to be accessible to novice and veteran cyclists alike – and you can be whimsical with your ride. The website says that you can ride a unicycle, but when I asked Angela about it, she said unicycles are a quirk she has never seen before. “In my years of doing the ride (since 2007, both as a participant and staff) I have never seen someone do the ride on a unicycle,” she pauses, “I would LOVE to see that! When the ride was [longer] there was a participant that did the ride on a BMX bike.”

If biking (or unicycling) is not for you but you still want to be in the thick of the event, participating as a crew member is a great alternative. “Our all-volunteer crew is made up of people who want to participate, but do not wish to ride a bike,” says Skelly, “[At] this event, there is something for everyone to do.” There is no fundraising minimum for crew members, but $500 is recommended to help cover costs.

Of course, donations are what keep the Red Ribbon Ride running every year. The process of donating is the same whether you are supporting a specific rider, team, or just contributing to the Red Ribbon Ride in general. Go to the website listed below, click donate, and fill in the appropriate information from there.

If you want to attend the Red Ribbon Ride to cheer on the team or the individual that you financially supported, Skelly recommends doing that from the pit stops. “[Attendees] can see their loved ones as they come into the stop and cheer them on as they leave to go to the next stop,” says Skelly. As Skelly described above, the pit stops are often themed, so in addition to being safer than finding a spot to cheer along the route, it is also fun to enjoy the experience that crew members create at each pit stop.

Above all, Skelly wants to make sure that everyone feels empowered to ride if they want to. “This is a ride, not a race,” she says, “It is about loving every mile, not necessarily riding every mile.” Whether you shred through the miles, savor each one, or even skip a few, the hope is that everyone gets to experience a weekend of coming together to enjoy the beauty of Minnesota, bike, and raise money for an important cause.